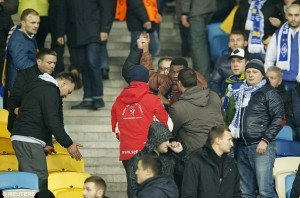 The Union of European Football Associations (UEFA) has charged Dynamo Kiev with racist behaviour and crowd disturbances after a video emerged showing four black fans being attacked in the stands during the side’s Champions League match on October 20. The Ukrainian side will face disciplinary proceedings after a video – captured by anti-discrimination network Football Against Racism in Europe – showed individuals in the home section attacking Black supporters in another section designated for home fans.

The incident, which took place at the NSK Olimpiysky, saw those appearing to be Kiev fans chasing the black men across the stands before throwing punches and kicks at them.

FARE’s executive director, Piara Powar, revealed that incidents of this nature are not usually released in the public domain, but because of the severity of this particular attack FARE felt compelled to release the report. “Usually we do not go public with these sort of reports – but we thought the footage was so serious that it should be shared with the media,” Powar said. (Click on screen below to view video.)

The case will be heard by UEFA’s Ethics and Disciplinary Body on Tuesday, 27 October.

From a brief report in The Guardian: “FARE, which has raised the incident with local law enforcement agencies, said its observer also witnessed other home fans intervening to try to protect the victims. No police or stewards are visible on the footage, and the victims’ identity and condition is currently not known.”

A section of Chelsea fans were also ambushed by a hooligan group wearing balaclavas before the match in Kiev. Around 30 supporters were attacked by the thugs after leaving the Shato Brewery, just off Independence Square in the Ukrainian capital city. The attack left many fans cut and bruised with one requiring medical treatment at hospital.

A Chelsea fan who wished to remain anonymous said: “It was orchestrated. Five guys turned up at the pub and sussed us out. One was texting at the bar and they were obviously lying in wait to have a dig.”

Dynamo have already been fined £11,000 by UEFA this year following racist behaviour during a Europa League game with Everton last season. The Ukrainian side was also punished for setting off fireworks in the stands and for their insufficient organisation. On that occasion, UEFA partially closed the NSK Olimpiysky for the first-leg of their Europa League quarter-final against Fiorentina the following month.