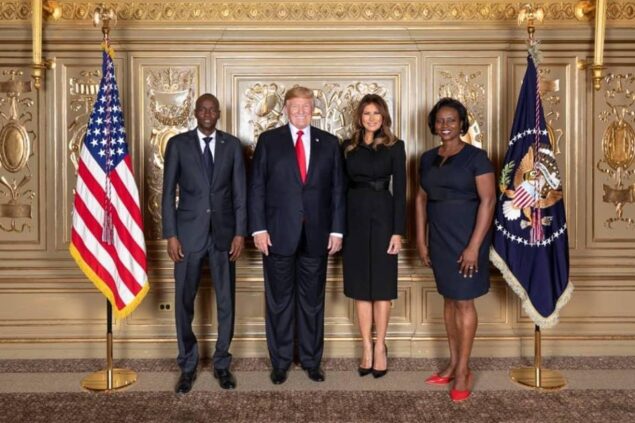 At the end of June, a prominent anticorruption activist, journalist, and emerging political leader, Antoinette Duclaire was brutally assassinated in Port-au-Prince. Killed alongside her was fellow journalist Diego Charles. Duclaire was shot seven times in the front seat of her vehicle, including once in her left temple. Duclaire had previously warned that she was facing death threats, and, In February, her house was shot up by unidentified gunmen.

Last week [June 30], a prominent anticorruption activist, journalist, and emerging political leader, Antoinette Duclaire was brutally assassinated in Port-au-Prince. Killed alongside her was fellow journalist Diego Charles. Duclaire was shot seven times in the front seat of her vehicle, including once in her left temple. Duclaire had previously warned that she was facing death threats, and, In February, her house was shot up by unidentified gunmen.

Sadly, this shocking assassination is but the latest tragedy in Haiti. There have been more than a dozen massacres since the fall of 2018, when youth organizations launched a nationwide anticorruption movement. In 2020, the US sanctioned a former Haitian police officer and alleged death squad leader, Jimmy Cherizier, and two other government officials for their involvement in the 2018 La Saline massacre, in which some 71 people were killed. In just the last week, at least 60 people have been killed in the escalating violence.

Parliamentary terms expired in January 2020, leaving the current president, Jovenel Moïse, who was elected with just 590,000 votes (in a country of 11 million), to govern by decree without any checks or balances.  Emboldened by strong support from the Trump administration, Moïse has created a new intelligence agency, expanded the definition of terrorism to include common protest tactics (echoing Trump and other Republican’s efforts to target the Movement for Black Lives), and unilaterally replaced judges on the supreme court. Legal experts and civil society organizations contend that Moïse’s term constitutionally expired in February 2021 as well, and no longer recognize the government. Yet even under Biden, the United States has continued to side with Moïse as he brazenly attempts to change the constitution to greatly expand executive powers and immunity for himself and other elected politicians.

Today, armed groups organized under Cherizier’s leadership control wide swaths of Port-au-Prince and flaunt their power openly without fear of arrest. Recent attacks have displaced more than 10,000individuals and impacted more than 600,000. Doctors Without Borders, which operates in war-torn nations across the world, has had to temporarily close its emergency facilities. The violence has disrupted transportation between the capital and the rest of the country, adding to emerging scarcities including fuel.

In the midst of spiraling insecurity, an ongoing pandemic, and rapidly increasing food insecurity, the Haitian government, with the full support of the United States, the United Nations, and the Organization of American States, has called for the holding of elections later this year. The day before the assassination of Duclaire and Charles, the government released an updated electoral calendar for new general elections, including a constitutional referendum, for September 26, 2021.

Haitian civil society organizations have stated unequivocally that free and fair elections are impossible in the current environment. A number of prominent members of the US Congress agree and have been increasingly vocal in their opposition to the Biden administration’s policy. Gregory Meeks, Chairman of the House Foreign Affairs Committee, and Rep. Hakeem Jeffires, Chairman of the House Democratic Caucus, led a group of 69 members of congress in calling on the Biden administration to urgently change course, warning that “elections held without meeting internationally accepted standards for participation and legitimacy will only further undermine faith in democratic governance, waste scarce resources and perpetuate a cycle of political instability and violence.”

Last week, Rep. Meeks was joined by Republicans Mark Green and Michael McCaul, the lead Republican of the Foreign Affairs Committee and the Chairman Emeritus on the House Homeland Security Committee, to denounce the “increasingly authoritarian bent” of the Haitian president, and to express a bipartisan message that the Biden administration must stop pushing for elections at all costs. Earlier this year, Rep. Andy Levin, along with Rep. Val Demings, who is running against Marco Rubio in next year’s Florida Senate elections, launched a congressional caucus on Haiti. The new group in Congress has consistently pushed back on the Biden administration’s continuation of Trump’s Haiti policy. The Haitian and Haitian-American vote is seen as key to the Florida race.

Rather than rushed elections, Haitian civil society organizations have proposed a negotiated departure for Moïse and his replacement by a non-partisan transitional government that can undertake needed reforms and eventually oversee a secure and credible transition back to democracy. The Biden administration, the UN Security Council, and Organization of American States have all rejected this path forward, insisting on the holding of elections at any cost.

Today, Haiti is at an inflection point. Over the last two decades, international actors have spent billions of dollars on what some have wrongly called “nation-building” in the world’s first independent Black republic. Haiti is the only nation where the enslaved population overthrew its colonizers, and, in 1804, it became the first country to permanently abolish slavery. Yet, for centuries, it has paid dearly for that historic achievement.

Former president Donald Trump, whose administration provided steadfast support to the current Haitian president, notoriously referred to the nation as a “shithole” after a campaign stop in Miami’s Little Haiti neighborhood. During his own campaign, Biden stated that “The Trump Administration is abandoning the Haitian people while the country’s political crisis is paralyzing that nation.” Yet, under the Biden administration, there has been no sign of significant change in policy toward Haiti. Though the Biden administration did grant Temporary Protected Status (TPS) to Haitian migrants this spring, in its first few months in office, the new administration deported more Haitians than the Trump administration did in the entirely of fiscal year 2020. Unfortunately, this has all occurred largely outside the spotlight of the international media.

For all the rhetoric on race and reckoning with how the US’s racist past connects with institutional racism in the present, US policy continues to stifle democracy and economic advancement in the only country founded after a successful slave revolt. Will the Biden administration finally change course in Haiti, or will it continue Trump’s racist foreign policy off the coast of Florida?

Jake Johnston is a Senior Research Associate at the Center for Economic and Policy Research in Washington, D.C.