In his quasi-concession speech last Thursday [June 16, text here], broadcast without a live audience (probably due to the fear of loud boos), Bernie Sanders began with the observation, “Election days come and go. But political and social revolutions that attempt to transform our society never end.” In other words: Even if I concede, I want the movement I generated to continue. 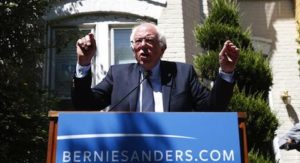 Citing various ongoing mass movements, he declared, “And that’s what this campaign has been about over this past year. That’s what the political revolution is all about.”

Subtext: It’s all about bringing you kids into the Democratic Party—in order to change it.

Then comes the now-familiar self-congratulation about winning 22 state primaries and caucuses, and repetition of his wonted insistence that “our vision for the future” is not a “fringe idea” and not a “radical idea.” “It is mainstream.”

This tells us that what will follow will be very mainstream. It is followed by the observation that in all the primaries Sanders won among people under 45. “These are the people who ARE the future of our country.” He extensively praises the youth for all their phone calls and canvassing, and even youth burdened with student debt for making campaign contributions.

“This campaign has never been about any single candidate. It is always about transforming America.”

This is followed by about one-fifth of the speech devoted to enumerating the various “disgraces” of contemporary American reality without ever once using the word capitalism. He then segues into the Trump issue:

“The major political task that we face in the next five months is to make certain that Donald Trump is defeated and defeated badly.” Meaning, “we” will all have to—as our major task—back the Wall Street candidate Clinton versus the racist buffoon.

The meat of the presentation occurs not quite midway through, with depressing reference to the Wednesday meeting between Sanders and Clinton and their spouses, from which Sanders emerged beaming.

“I recently had the opportunity to meet with Secretary Clinton and discuss some of the very important issues facing our country and the Democratic Party.” In other words: capitulation.

This is where the boos would have started at a rally. Opportunity? Really, Uncle Bernie, you make it sound like an honor to chit-chat with Wall Street’s warmonger.

“It is no secret that Secretary Clinton and I have strong disagreements on some very important issues. It is also true that our views are quite close on others. I look forward, in the coming weeks, to continued discussions between the two campaigns to make certain that your voices are heard and that the Democratic Party passes the most progressive platform in its history and that Democrats actually fight for that agenda.”

In other words, she’s not so bad after all. I want you all to take a second look at Hillary and get ready to work with her.

Then follows a long litany of needed reforms in the Democratic Party and its platform—by all appearances a feisty demand for change—culminating in a call to young people to run for office and “engage on that level.”

Buried in this list is the following milquetoast statement: “We must take a hard look at the waste, cost overruns and inefficiencies in every branch of government–including the Department of Defense. And we must make certain our brave young men and women in the military are not thrown into perpetual warfare in the Middle East or other wars we should not be fighting.”

Just 55 words out of 2752, or under 2% of the speech dealt (elliptically) with Hillary’s forte: imperialist foreign policy, and her particularly bloody role since her days as First Lady, when she cheered on the U.S./NATO destruction of Yugoslavia to her support for the Iraq war as senator to her super-hawkish role as secretary of state always advocating more troops, more bombing, more war from Pakistan to Syria to Libya (and thus creating more hatred, blowback, terrorism and geographical expansion of al-Qaeda and ISIL).

In concluding, Bernie declares, “We have begun the long and arduous process of transforming America, a fight that will continue tomorrow, next week, next year and into the future.”

In other words, with sugarplum dreams in your heads, you will campaign for Hillary (doing it for me, kids!) and get her into office so she can help implement our long-term domestic reform agenda, while she expands the anti-Russian NATO military alliance, provokes Russia in Ukraine and Syria, and almost surely ratchets up the level of U.S. military action in several Middle Eastern countries.

That’s what I call disgraceful.

But the sheep need not allow themselves to be herded by the sheepdog. My two children, 26 and 30, are among the “Bernie or Bust”crowd. They’re the ones who inspired my own limited enthusiasm for the Sanders campaign. There is no way they will vote for Hillary, the virtual heroine of the military-industrial complex.

And if someone says, “Well, you have to! We have a two-party system, and there’s no other option!” they will reply with their own proper logic and explicatives.

While Sanders prepares to throw in the towel, Clintonites in the State Department posture to get her attention as most useful allies in her Syrian “no fly zone” plans.

It’s unusual for 51 State Department employees to not only sign and submit to their department superiors, but to leak to the press, a petition urging another blatantly illegal and inevitably disastrous, illegal, murderous regime-change war, such as the U.S. has conducted in Iraq and Libya.

That it has occurred is doubtless (as former high-ranking CIA agent Ray McGovern has opined on RT TV) a bid by Hillary Clinton-appointed low-ranking State Department officials to curry favor with the past Goldwater Girl and future President Clinton (known to be a bloodthirsty soulless Kissinger in a pantsuit hell-bent to leave her mark on the Middle East—just like the way her husband left his mark on the butchered, still-bleeding Balkans that our press never mentions). Some promotions in store, no doubt.

Isn’t it obvious that they’re lining up support for a showdown with Russia? The Wall Street Journal reports: “Obama administration officials have expressed concern that attacking the Assad regime could lead to a direct conflict with Russia and Iran.” Well, duh.

My guess is that Hillary will risk that. The sad thing is that she’ll have some erstwhile Bernie supporters (firmly against the “billionaire class” but clueless about U.S imperialism in general) standing there behind her, and likely Bernie himself. Some “political revolution”—that channels its children into another imperialist war, maybe the biggest, most reckless one yet.

Maybe this time the war will occur under conditions of military conscription, targeting as always 18 to 25-year-olds, now including women, no college deferments applicable.

What a triumph for Hillary it will be,
Should boys and girls both die in World War III.

Gary Leupp is Professor of History at Tufts University, and holds a secondary appointment in the Department of Religion. He is the author of Servants, Shophands and Laborers in in the Cities of Tokugawa Japan; Male Colors: The Construction of Homosexuality in Tokugawa Japan; and Interracial Intimacy in Japan: Western Men and Japanese Women, 1543-1900. He is a contributor to Hopeless: Barack Obama and the Politics of Illusion, (AK Press). He can be reached at: [email protected]

Related reading:
Bernie Sanders’ new task is to convince his supporters to back Hillary Clinton, by Vito Laterza, The Independent, June 20, 2016

… ‘Sanders is likely to endorse Clinton only after the convention. His team wants to keep the pressure high to obtain key policy concessions in the final Democratic platform.’

Call for a national debate in the U.S. on ‘regime change’ policy in SyriaMultipolarity
Ottawa’s secret pact with six Gulf State monarchiesMultipolarity