Bernie Sanders, not Donald Trump, is winning over the ‘white working class’ 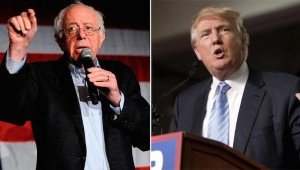 The story goes something like this: The raging, pasty suburbanite bigots one sees at rallies for billionaire blowhard Donald Trump have turned to racism and Republican politics not they were driven, to start, by the hatred of Muslims and Mexicans but because of economics. The white working class has been betrayed by politicians from both parties — by both the liberal and conservative wings of the neoliberal consensus — and now it’s lashing out.

The problem one soon encounters is one of definition: What is the “white working class” and is examining Republican primary results the best way to gauge where it stands, if a class as broad as “white” and “working” can be said to have a shared politics?

Writing for In These Times, author Jack Metzgar notes that the basis for this assumed white working-class support for Trump is his popularity among Republican voters who lack a college degree, who have indeed preferred him to the other Republicans in the race. “Among all adult whites,” however, “nearly 70 percent do not have bachelor’s degrees,” the definition of working class used by pundits. One recent survey found that 55 percent of this group support Trump, meaning “the white working-class is under-represented among Trump supporters,” Metzgar observes, which means “his supporters are disproportionately college-educated whites.”

This becomes clear when one takes a step back from the tiny weird world of the U.S. right and looks at the electorate as a whole. In a general election, polls Sanders would not only beat Trump but destroy him: Reuters currently has him up by nearly 10 per cent overall, and that with far less media coverage. Among white voters in particular, Sanders’ margin of victory in the most recent poll does drop to just under 5 per cent — but among white voters who make less than US$25,000 a year, his margin of victory actually grows to 15 per cent. Among unemployed white voters, that number rises to 16 per cent. Practically no one who isn’t white is voting for Donald Trump.

Commentators are right, then, to believe the Trump phenomenon is a white people problem — it’s just the data shows it’s not working-class whites who are the heart of this problem.

Even Hillary Clinton, the former secretary of state and once proud promoter of the free trade agreements said to have made the angry white male so angry, isn’t entirely a lost cause when it comes over to winning over less well-off white people. In a head-to-head matchup with Trump, she loses the white vote by 32.9 per cent to Trump’s 40.5 per cent. Among white people who make less than US$25,000 a year, however, that gap falls to less than one per cent, with more than 35 per cent of those polled saying they would vote for neither, giving #NeverTrump a nearly two-thirds majority.

Speaking of voting for neither: the millions of U.S. citizens who after months of oppressively extensive campaign coverage conclude that “screw it, I’m staying home”, give their full-fledged support to the non-voting option. During the last presidential campaign in 2012, more than 42 per cent of eligible voters opted for that.

Writing in the New York Times last November, ProPublica reporter Alec MacGillis cited data from the Pew Research Center showing that a majority of “likely nonvoters,” the majority of whom are white, are both less wealthy and more liberal than voters, thinking “aid to the poor” does more good than bad, for instance, while the average voter thinks the opposite.

That non-voters are non-voters speaks to the fact that the U.S. political system of representative democracy does not represent a good number of the people ostensibly being represented. The encouraging news is that most of these people have not turned to Donald Trump’s brand of revanchist proto-fascism; the question is whether, beyond pandering, there will come a time when the U.S.’s two-party democracy offers 120-some million U.S. citizens an option more enticing than a night in.

In the meantime, solace: The ugly, dumb xenophobes and actual Nazis supporting Trump are older than the U.S. population as a whole — the demographic threat, in other words, will soon take care of itself. By 2045 mega-racist whites will, one hopes, be a minority of what for sure will no longer be the racial majority in the United States, border wall or not. May we all live to see it.

As Donald Trump racks up victories in the Republican presidential primary, breezily promising to win Democratic states like New Jersey and Michigan in the general election, it’s easy to forget just how unpopular he is with the American public. Extremely unpopular. Historically unpopular…

… Black voters have been remarkably loyal to the Clintons for more than 25 years. It’s true that we eventually lined up behind Barack Obama in 2008, but it’s a measure of the Clinton allure that Hillary led Obama among black voters until he started winning caucuses and primaries.

Now Hillary is running again. This time she’s facing a democratic socialist [Bernie Sanders] who promises a political revolution that will bring universal healthcare, a living wage, an end to rampant Wall Street greed, and the dismantling of the vast prison state—many of the same goals that Martin Luther King Jr. championed at the end of his life. Even so, black folks are sticking with the Clinton brand.

What have the Clintons done to earn such devotion? Did they take extreme political risks to defend the rights of African Americans? Did they courageously stand up to right-wing demagoguery about black communities? Did they help usher in a new era of hope and prosperity for neighborhoods devastated by deindustrialization, globalization, and the disappearance of work? No. Quite the opposite…