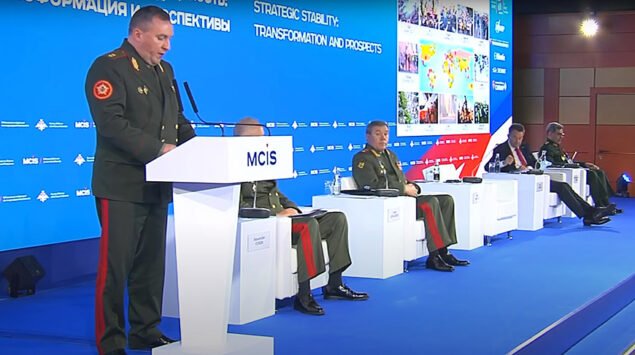 The conference in progress. Screenshot from a video

One doesn’t have to trust the motives of a public official, doesn’t have to assume that because observations are accurate they’re also disinterested, to appreciate the veracity (at least the verisimilitude) of comments like the following from Belarusian Defense Minister Viktor Khrenin at the 9th Moscow Conference on International Security today.

One doesn’t have to trust the motives of a public official, doesn’t have to assume that because observations are accurate they’re also disinterested, to appreciate the veracity (at least the verisimilitude) of comments like the following from Belarusian Defense Minister Viktor Khrenin at the 9th Moscow Conference on International Security today. (Emphasis added throughout.)

“During the previous Moscow conference we expressed our opinion about underlying reasons for the concept of Europe with different speeds [?], about the formation of the Germany-France vector and the UK-USA vector of European politics. As we expected, individual Eastern Europe countries rushed into the transatlantic embrace of American allies. Poland, the Baltic states, and Ukraine trade in their sovereignty and offer brazen Russophobia as a product. As part of the trend American troops penetrate Eastern Europe, expand the occupation zone. Eastern Europe is getting rapidly militarized. A military base is being built in Poland. U.S. tank battalions are endlessly rotated in and out a dozen of kilometers away from the Belarusian border under the guise of protection of the Baltic states. Ukraine wants British troops stationed in the country. Meanwhile, we witness how troops and forces of third countries master the theater of future warfare near our borders. Military budgets are getting inflated. Offensive weapons are being bought in massive amounts.”

The above offers both a general/historical perspective and a fairly detailed assessment of current dynamics.

This is no less cogent and germane:

“At the same time we see regular attempts to transform the American occupation regime in Europe. In our opinion, it is the right term for describing the deployment of American troops in Germany and Italy after World War Two. The troops have been staying there since the Yalta Conference of 1945 decided on dividing territories of the conquered Hitler coalition countries into occupation zones.”

“Mass media increasingly frequently publish projections concerning the escalation of the situation and results of the modeling of how world powers may act in various theaters of war. Nations are getting accustomed to the idea that a military clash is a normal course of events, so-called normalcy. Simultaneously new strategic ideas, warfare forms and methods are being worked out in anticipation of future military clashes. The Pentagon’s concept for global integrated multisphere operations is a case in point. The relevant charter documents are already being written on the basis of the concept and army development programs are being implemented.”