By Greg Butterfield, published on his newly-created blog, ‘Red Star Over Donbass’, Jan. 20, 2015

Jan. 19 – A horrific war is unfolding on the territory of the former Soviet Union at the behest of Washington and Wall Street. Jets, missiles, artillery, mortars and land mines are being used to target homes, schools, hospitals and workplaces in a war of terror waged with U.S. weapons and taxpayer money against an anti-fascist resistance movement. Yet most workers and poor people in the U.S. are completely unaware of the war crimes being committed in their names. 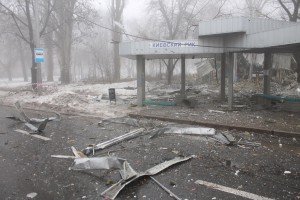 The Ukrainian junta of oligarchs, neoliberal politicians and neo-Nazis installed with Washington’s support last February has finally cast aside the last pretense of respecting the flawed ceasefire negotiated at Minsk in September.

On January 18, Kiev officially launched a new military offensive against the Donetsk and Lugansk People’s Republics (DNR and LC) of the Donbass mining region, where people voted overwhelmingly for independence from Ukraine in a referendum last year.

“Two hours ago,” said Yuri Birukov, aide to Ukrainian President Peter Poroshenko, on his official Facebook page, “the entire group of our military in sector B received an order and opened saturation fire on known positions of the separatists.”

“For several weeks, we’ve been shouting and trying to prove that the Ukrainian military is using the truce to perform a massive regrouping of its forces to prepare for a large-scale offensive. But all of our appeals to the OSCE [Organization for Security and Cooperation in Europe] and Joint Centre for Control & Coordination have been ignored,” said Donetsk Prime Minister Alexander Zakharchenko.

“The representatives of the JCCC have themselves felt the scale of the Ukrainian shelling,” as they came under fire in Gorlovka earlier in the day, he added. (RT.com, Jan. 18)

“A total of 56 shelling attacks from 82mm to 152mm weapons have been recorded over the past 24 hours,” reported Donetsk Defense Ministry Deputy Commander Eduard Basurin on January 19. “A 500-kg bomb was dropped in Gorlovka by Ukrainian aircraft.

“A total of 44 people have been injured and nine people killed in the DNR over the past day,” said Basurin, “including a child who is in severe condition.”

The Novorossiya News Agency documented dozens of artillery strikes Jan. 18 in four central neighborhoods of the Donetsk capital. All schools in the DNR have been ordered closed.

On Jan. 19 the 3rd City Hospital in Donetsk suffered a direct hit from a Ukrainian GRAD missile. A doctor was severely wounded and later died. Five others were injured. The children’s ward was evacuated to a bomb shelter. (Novorossia.su)

The city of Gorlovka was shelled continuously for 24 hours, residents reported. The city center was targeted, including the bus station. Although official numbers are not yet available, there were reports of dozens killed citywide.

While Ukraine continually violated the terms of the ceasefire, the Donetsk and Lugansk militias were constrained from responding by the Russian Federation. Both people’s republics are dependent on Russia for humanitarian aid due to the blockade by Ukraine and its U.S./European allies.

Freed from this constraint, the people’s militia moved decisively to expel Ukrainian troops from the Donetsk airport and advanced to the outskirts of occupied Mariupol. Militia forces repelled attempts by Ukrainian forces to re-enter the airport and push into the city limits of Donetsk.

U.S.-made weapons were recovered from the liberated areas of the Donetsk airport. (South Front, Jan. 18) Zakharchenko reported that Ukraine used banned chemical weapons there. “After the shells burst, a pungent cloud of gas spread across the old terminal. They are firing banned munitions in breach of the Geneva convention,” he said after visiting the Donetsk airport with journalists. (ITAR-TASS)

Zakharchenko, folding up a tattered Ukrainian flag taken down from the terminal, challenged Poroshenko to come to the airport and meet with him face-to-face. (Graham Phillips video)

On January 12, a civilian bus was destroyed near the village of Volnovaha in Donetsk. Ten people were killed and 13 wounded. The bus had just passed through a Ukrainian military checkpoint.

Poroshenko – just back from participating in the imperialist “solidarity march” with Charlie Hebdo in Paris – seized on the tragedy to blame the Donbass people’s militias of “terrorism.” Poroshenko claimed the bus was targeted by DNR artillery.

The people’s militias and Donetsk government denied the charges, pointing out that they had no weapons in firing range, and called for an independent investigation.

In fact, experts say the bus appears to have been destroyed by a landmine placed by Ukrainian forces. (“Anatomy of a provocation,” Colonel Cassad blog) Nevertheless, the junta took the bus’s destruction as a handy pretext for its long-planned new offensive.

Poroshenko moved up a vote in the Verkhovna Rada (parliament) to authorize three new mobilizations (military drafts) for 2015, of up to 104,000 people, potentially raising the size of the Ukrainian military to 250,000. (Sputnik News, Jan. 15) The Rada also called on the European Parliament and European Union to add the DNR and LC to its list of “terrorist organizations.”

After terrorizing the populace of Donbass and launching a war that has killed nearly 5,000 people since April – according to official UN figures – Poroshenko staged a cut-rate Charlie Hebdo-style “memorial march” for the bus victims in Kiev on January 18. At the same moment, his regime was raining bombs on the people of Donetsk. (Novorossia.su)

Interestingly, a Jan. 15 Ukrainian military attack on another bus in Donetsk received virtually no media coverage. “Yesterday a shell hit the bus with 23 workers from the dolomite plant in Dokuchaevsk,” said Andrei Purgin, chair of the Donetsk Supreme Soviet, “killing a woman and sending seven other people to the hospital in serious condition.” (Borotba.su, “War Chronicle”)

In an emergency statement January 19, Donetsk Prime Minister Alexander Zakharchenko said: “Ukraine used the truce in order to arm themselves, and create a coherent unit able to carry out combat missions. Now we clearly see that Ukraine has violated the truce and Minsk accords. Ukraine shoots homes and civilians: children, the elderly and women. It applies the methods of terror. Ukrainian jets bombed Gorlovka. Shrapnel was even flying near the OSCE mission in Donetsk.”

The intensification of war crimes by the Ukrainian military is in line with the tasks Washington has assigned its clients in Kiev. These were enshrined in the “Ukrainian Freedom Support Act,” passed with near unanimous bipartisan support by the U.S. Congress and signed into law by President Barack Obama on December 18.

The December 4 Congressional vote opened the floodgates to a new war buildup by the far-right regime, aimed at destroying the anti-fascist resistance in the Donbass and opening Russia’s western border to NATO.

Obama had not even signed the law yet when its repercussions began to be felt.

“A leadership source reports that two days ago in the port of Odessa, three infantry fighting vehicles and 10 howitzers were delivered. Last week ended with the delivery of two APCs and IFVs from Eastern Europe.

“At the current pace,” Rozhin warned, “with weapons aid and technology from abroad, the restoration of the junta’s combat troops to pre-July levels can be expected by mid-January.” (Colonel Cassad blog)

According to independent news site Verb, Semen Semenchenko, leader of the fascist “Donbass” Battalion of the National Guard, and now a Rada deputy, bragged that Ukraine would soon receive U.S. Javelin anti-tank missile systems, designed to destroy armored vehicles, bunkers and helicopters. The Pentagon used these weapons extensively during the occupation of Iraq. (Glagol.su, Jan. 6)

For Washington, establishing a NATO military presence in Ukraine is vital to its long-term strategy of regime change in Russia and ultimately breaking up the Russian Federation.

As if on cue, the Rada voted December 23 to abolish Ukraine’s non-aligned status, deepen cooperation with NATO, and “achieve the criteria necessary for the acquisition of membership.” (Timer.od.ua, Dec. 24) To enter into force, the changes will be voted on a second time, then signed by Poroshenko.

An official NATO mission opened in Kiev just over a week later, on January 1, hosted by the Lithuanian diplomatic mission. (Ukrainia.ru)

In his January 19 emergency statement, Donetsk leader Zakharchenko said: “My people are peaceful and do not want war, do not want to kill anyone. However, the armed forces of the Donetsk People’s Republic are prepared to respond to all these machinations. Our counterattack has already started ….

“Once again, I appeal to the international community and the OSCE: if you share our desire for a ceasefire, then force Kiev to abide by the Minsk agreement,” concluded Zakharchenko. (Anna-News, Jan. 19)

The courage and determination of the people’s militias and the residents of Donbass is not in doubt. But to triumph over the enormous forces arrayed against them, they will need the solidarity of antiwar and working-class movements around the world. 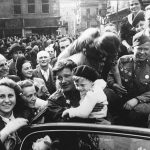 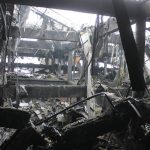