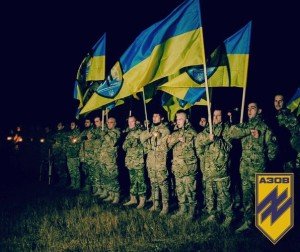 On October 22, the unit of the ‘Azov Battalion’ of right-wing paramilitaries occupying the city of Mariupol in Donetsk region of eastern Ukraine held a nighttime ceremony to honor 33 of its fighters killed in Ukraine’s civil war. The ceremony took place in the village of Urzurf which is where the occupying battalion is stationed.

The event began with a torchlight parade to the center of the village featuring torches, flags and patriotic songs. According to Mariupol News, some 1,500 paramilitaries and their supporters took part.

The parade arrived at a monument which features three wooden swords protruding from the ground (see photo). “Nearby stood a soldier with 33 boards, each of which had names of the person killed during the “ATO” (‘Anti-Terrorist Operation’). 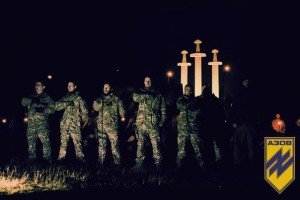 The leader of the ‘Azov Battalion”, Andrew Biletsky, gave a speech in which he described the 33 killed combatants as “heavenly warriors”. Azov ideology is heavily steeped in Aryan, paganist themes in which war dead ascend to Valhalla. From Wikipedia:

In Norse mythology, Valhalla (from Old Norse Valhöll “hall of the slain”) is a majestic, enormous hall located in Asgard, ruled over by the god Odin. Chosen by Odin, half of those who die in combat travel to Valhalla upon death, led by valkyries, while the other half go to the goddess Freyja’s field Fólkvangr. In Valhalla, the dead join the masses of those who have died in combat known as Einherjar, as well as various legendary Germanic heroes and kings, as they prepare to aid Odin during the events of Ragnarök. Before the hall stands the golden tree Glasir, and the hall’s ceiling is thatched with golden shields. Various creatures live around Valhalla, such as the stag Eikþyrnir and the goat Heiðrún, both described as standing atop Valhalla and consuming the foliage of the tree Læraðr.