The following article by Murray Brewster of Canadian Press is reprinted on the influential ‘Defense Watch’ blog of David Pugliese, a columnist of the Ottawa Citizen and National Post. 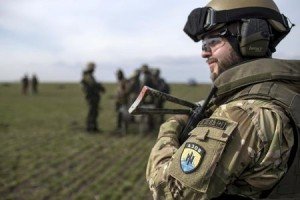 Ukraine’s Azov Battalion is looking for help from Canada

Unit members are not happy with being branded as neo-Nazis.

The unit has continued to face accusations of Neo-Nazi links. Andrey Dyachenko, a spokesman for the battalion, told USA Today in March that only 10 to 20 percent of the unit are Nazis. Last year, members of the battalion were shown on German television wearing helmets with Nazi insignia.

KYIV, Ukraine – In Ukraine, they are sometimes called the Men in Black. It can be a term of endearment for the roughly 1,500 members of the notorious Azov Regiment. But for the rest of the world, there is a different, more sinister connotation —something a spokesman for the group says Canada can help correct.

A notorious ultra-nationalist paramilitary group in Ukraine is appealing to Canada to bestow credibility on them and burnish their image. In an interview with The Canadian Press, Alexander Alferov seemed weary about fending off claims the ultra-nationalist, all-volunteer paramilitary organization is full of neo-Nazis and hard-core white supremacists. 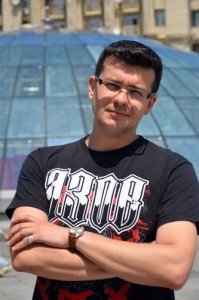 Until the outbreak of violence last year, Alferov was a low-key, soft-spoken doctor of Russian and Ukrainian history. Now, he is one of the principal faces of a group reviled in the international media, most recently in Washington, where lawmakers have expressly banned the U.S. from supporting or training the regiment, which has grown from just a few hundred committed volunteers a little over a year ago.

The group, Alferov said, is committed to restoring the borders of Ukraine, including Crimea, and is prepared to wage a long campaign in order to make that happen.

Canada is a “noble-minded nation” and should publicly reject the characterization of the group as pro-fascist, he said. “I really hope that Canada — the country that always been a historical, political ally of Ukraine — is going to make a right decision, by supporting the laws that are aimed to help Ukraine and refute all the political statements that Azov Regiment is a neo-Nazi formation.”

Canada, with its ex-pat Ukrainian community, understands the country and its politics better than anyone, said Alferov. It has also been the most vocal Western nation in criticizing the annexation of Crimea and Russia’s support for separatist rebels in the eastern regions of Luhansk and Donetsk, he added.

Should the Harper government openly side with the U.S. ban, it would likely “blacken” Canada’s standing among embattled ordinary Ukrainians, “who see us as their shield,” said Alferov, speaking through a translator.

When Canada announced it was sending 200 troops to train the Ukrainian military, Defence Minister Jason Kenney said the instruction would not extend to Nazi sympathizers. “We’re not going to be in the business of training ad-hoc militias,” Kenney said. “We will only be training units of the Ukrainian National Guard and army recognized by the government of Ukraine.”

The Azov Regiment is a recognized element of the Ukrainian National Guard and takes its direction from the Interior Ministry.

Alferov said it makes little difference whether Canadians provide training. What’s important to them is countering what they see as Russian propaganda.

“The opinion that Azov Regiment is neo-Nazi exists only in the international press,” he said.

Alferov accused some media outlets of having being bought off by the Russians or fooled with high-quality fake images, doctored with Photoshop.

The regiment originated as a national socialist group called “Patriot of Ukraine”. Its websites praised white supremacy, racial purity, and the need for authoritarian power.

Some of the regiment’s fighters have been photographed wearing Nazi symbols. The group’s own flag is an inverted Wolfangel symbol, which was used by the Waffin SS. They are Slavic symbols that Hitler’s Germany appropriated, Alferov insisted.

The unit has proven to be tough and disciplined; so much so, in fact, that fighters are reportedly not allowed to smoke. Members run the gamut from teenaged boys to men in middle age.

Most of them come from the separatist-held eastern Ukrainian region, although Alferov said they have recently begun developing strength right across the country.

The group denies reports that Europeans have been flocking to join its ranks, saying it does not recruit foreign fighters and relegates non-Ukrainian members to training positions.

Canada was undeniably popular here even before the overthrow of the Yanukovych regime, but Harper’s persistent verbal battering of Vladimir Putin has not gone unnoticed.

“I like Canada,” Alferov said in English at the end of the interview. “They understand who we are fighting as much as we do.”

Inside the Mariupol base of the controversial Azov Battalion, Australian Broadcasting Corporation, March 12, 2015

… In Canada, there has been across-the-board political support for the war being waged by the Kyiv government and its allied battalions. Recently, news of the role of the extreme right in the war in Ukraine (news only to those feigning ignorance or whose heads have been in the sand during the past 14 months) was ever-so-briefly reported following the vote in the U.S. Congress on June 11 to deny funding to some of the extremist battalions.

The U.S. vote caught Canadian politicians with their pants down. The more faint-hearted or embarrassed among them reacted with variants of, ‘Gee, I didn’t know. Someone should do something about this.’

One tactic to lessen international attention on the extremist battalions and gain them access to Western military training and arming has been to integrate them into Ukraine’s National Guard. When Canada’s defense minister, Jason Kenney, was placed on the hot seat following the U.S. Congress vote, he smoothly replied that only units of the National Guard and the regular Ukraine army would receive training from the military mission that Canada is soon to land in Ukraine.

… It’s been a bad several weeks for Ukraine’s battalions. On June 11, the U.S. Congress voted to ensure that no funding or military training or equipping would go to the so-called Azov Battalion because of its openly neo-Nazi identification.

But a dissolution of that outfit is certainly not in the cards. Its role has been vigorously endorsed by Ukrainian government officials and it happens to control the industrial and port city of Mariupol in the southeast of Ukraine.

On June 13, the group staged a military parade through the streets of Mariupol to mark one year of its control of the city. On hand to cheer the “national heros” were no less than Interior Minister Avakov and National Security and Defense Council Secretary Oleksandr Turchynov. Among those giving a speech to the ceremony with Turchynov and Avakov alongside was neo-Nazi leader Andriy Biletsky.