From a report by Solidarity With The Antifascist Resistance in Ukraine (UK), Nov 3, 2015 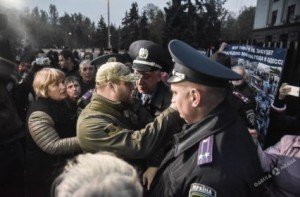 This time, the event was attacked by thugs from ‘Automaidan’. A photo display of the victims of May 2 was burned.

A few dozen Automaidan thugs arrived under the guise of holding a “patriotic song contest”. It was a clear provocation. Many of them were dressed in paramilitary fatigues. ‘Automaidan’ was one of several of the far right organisations which took part in the Odessa Massacre.

Despite a police presence, when the Kulikovo Field mourners hung up displays of the photos of the victims, they were assaulted by the Automaidan thugs and the displays were torn down and burned. 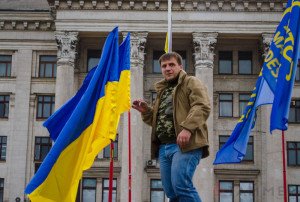 Eugene Rezvushkin in Odessa on November 2, 2015

The Automaidan people were led by Eugene Rezvushkin, a leading member of this paramilitary organisation who is supposed to be under house arrest following trial proceedings against him in September for his role in an assault against a local prosecutor last May. At that time, a large group of Automaidan thugs surrounded the Odessa Region Court of Appeal at that time with the stated intention of grabbing Prosecutor Yuri Bogomol and throwing him into a rubbish container (see report here). Following clashes and blows struck against him, the prosecutor was escorted away under heavy police protection. Rezvushkin was charged with “bullying and threats or violence against law enforcement officers”.

During the trial of Rezvushkin in September, Automaidan supporters rioted and burned tires outside the court house (see report here).

The Odessa Timer has a photo gallery of the events of Nov. 2, 2015, beginning with commemorators posting photos of the victims of the Odessa Massacre, followed by the attack on the display and the burning of its images.

On May 2, 2014, dozens of anti-Maidan activists were trapped in the Trades Union House as fascist thugs set the building on fire. The building overlooks Kulikovo Field (Kulikovo Pole).

Municipal elections were held across Ukraine on October 25. The pro-Maidan candidate in Odessa, A. Borovik, lost, winning only 25 per cent. He ran on behalf of the Solidarnost (Solidarity) party, closely tied to the ‘Petro Poroshenko Bloc’ electoral machine.

Borovik lost to Gennadiy Trukhanov, a former member of the Party of Regions and representative of the Doveriai slovam (‘Trust’) party, loosely tied to the Opposition Bloc. Trukhanov was re-elected with 52 per cent.

The video below shows the two opposing campaigns. Pro-Maidan activists with Ukrainian flags chant, “Down with the gang!”, a common chant heard on Maidan Square during the winter of 2013-14. The opposing rally, carrying the orange and white colours of the city of Odessa, chants, “Trukhanov is our mayor” and “Nazis – get out of Ukraine!” At 0:50, a female, Maidan supporter shouts, “Separatists! Take your Trukhanov and go away to your Russia!” Trukhanov supporters chant, “Down with Saakashvili!”, “Down with Stepan Bandera!”

In most of the cities of south and east Ukraine, pro-Maidan mayoral candidates went down to defeat on October 25.

Borovik’s candidacy was endorsed by the appointed ‘governor’ of Odessa, Mikheil Saakashvili, a Georgian national and the former president of Georgia. He was appointed in June 2015 by Ukrainian president Petro Poroshenko. Saakashvili is wanted in Georgia for alleged financial crimes.