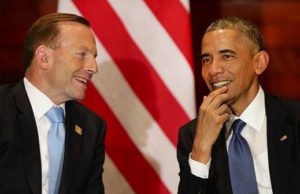 In an essay that excoriates the lack of strategic sophistication in Australian politics and the inadequate checks on prime ministerial power when it comes to deploying troops, Mr Brown said Australia needs “a better system for deciding to go to war”.

On the MH17 response, Mr Brown said Australia’s military planners “worked up options” for Mr Abbott to send as much as a brigade – about 3000 soldiers – onto Russia’s doorstep to help secure the crash site, though this would have included a contribution of Dutch forces.

Previously it has been reported Mr Abbott flagged sending up to 1000 Australian troops to provide protection. In the end, Australia quietly deployed about 200 special forces soldiers in a low-key role supporting police investigators.

But Mr Brown, who is now research director at the U.S. Studies Centre at the University of Sydney, has also written that “further curious military proposals were floated by staff from the prime minister’s office” including one that would have had Australian troops effectively involved in the conflict between pro-Ukrainian and pro-Kremlin forces.

“One of them – to commit uniformed Australian military logistics personnel to help the Ukrainians improve their own systems – seemed to ignore that this would make them legitimate targets for separatists fighting in Eastern Ukraine,” he said.

Mr Brown, who is also Prime Minister Malcolm Turnbull’s son-in-law, called for the creation of a national security council to better advise the government and also for greater “democratic accountability” on defence issues.

“This concentration of war powers in the hands of the prime minister, when combined with the institutional shortcomings, creates potential problems in decision-making that could cost lives. There are very few checks and balances,” he said.

Mr Brown used the Abbott example as part of a ruthless dissection of the superficial way Australia’s political system and public debates deal with war.

He said Mr Abbott wanted to use the Australian Defence Force to make Australia a muscular middle power but concluded his approach was “problematic – chaotic even” and could have “exposed Australian troops to substantial danger in pursuit of lofty objectives misaligned with national interests”.

With the risk of conflict in Asia a real possibility, Australia needs to hone its decision-making process for going to war, Mr Brown said, calling for the creation of a “national security council” made up of “the best and brightest strategic thinkers”.

He said the Australian public’s view of going to war had been shaped by the controversial 2003 commitment to Iraq, and this had tainted perceptions of the U.S. role in Asia, including the stationing of American marines in Darwin.

There was a “dangerous naivety” in Australia’s thinking that it would not be affected by the massive strategic changes under way in Asia, he said. “It seems to me that many Australians want to default to the role of bystander, particularly when it comes to the changing power balances in Asia, and the role of the United States.”

The report by James Brown published in Quarterly Essay is available to subscribers here. Here is the promotion text: 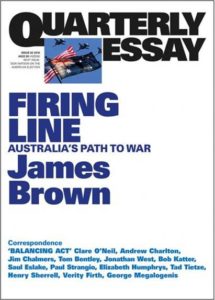 Going to war may be the gravest decision a nation and its leaders make. At the moment, Australia is at war with the Islamic State. We also live in a region that has become much more volatile, as China asserts itself and America seeks to hold the line [sic].

What is it like to go to war? How do we decide to go to war? Where might we go to war in the future? Will we get that decision right? In this vivid, urgent essay, James Brown looks to history, strategy and his own experience to explore these questions. He examines the legacy of the Iraq War and argues that it has prevented a clear view of Australia’s future conflicts. He looks at how we plug into the U.S. war machine now that American troops are based in Darwin. And he sheds fascinating light on the extraordinary concentration of war powers in the hands of the Prime Minister – and how this might go wrong. This powerful essay argues that we have not yet begun to think through the choices that may confront us in years ahead.

Dutch and Australian troops were planning to start war with Russia after MH17 was shot down, by John Helmer, published on his website Dances With Bears, June 15, 2016

President Barack Obama and his advisors spent at least a week, and as much as three weeks, planning to send up to 9,000 combat troops into eastern Ukraine, on the border with Russia, following the shoot-down of Malaysia Airlines Flight MH17 two years ago. The scheme, which was to have involved Dutch and Australian army units, with German ground and US air support, plus NATO direction, has inadvertently leaked from the publication of a report this week by a former Australian Army captain…

Former Australian Prime Minister Tony Abbott has joined the list of ex-politicians invited by President Petro Poroshenko to advise him on how to rule Ukraine as a member of the so-called ‘international advisory council’. Abbott unexpectedly popped up in the Ukrainian capital on Monday.

Comprised mostly of foreigners, the Kiev-based council was officially established last December. Previously called the International Advisory Council on Reforms, it aims to “facilitate the implementation of reforms in Ukraine on the basis of the best international experience.” Let’s look at some of the invitees and what wisdom they have to share.

Tony Abbott, former prime minister of Australia:
While still in office, the ex-PM had the third-lowest career-low approval rating of 24%, according to a February 2015 Newspoll. After losing Liberal leadership challenge back home last September and becoming vacant for political endeavors, Abbott was quickly invited to visit Ukraine.

Abbott and Poroshenko certainly have one thing in common – their dislike of Russian President Vladimir Putin. The former Australian leader said he would “shirtfront” the Russian head of state on the sidelines of 2014 G20 summit over the MH17 tragedy.

According to Poroshenko, Abbott was one of the most popular foreign politicians in Ukraine back in 2014. Abbott even joked about it saying that the “shirt-front must have translated well.” However, Abbott’s threat never materialized and Putin ended up cuddling a koala at the conference.

Mikhail Saakashvili , former president of Georgia:
Despite being wanted on corruption charges – including the embezzlement of over $5 million back home – and having his Georgian citizenship rescinded, Saakashvili was briefly appointed as the head of the International Advisory Council on Reforms in 2015. Currently serving as the governor of Odessa, he managed to get into a shouting match with Ukrainian Interior Minister Arsen Avakov, who was incidentally born in Armenia, with a ‘water fight’ ensuing between the pair.

Tony Blair, former prime minister of Britain:
The former leader of New Labour and UK Prime Minister between 1997 and 2007 has also been invited by Kiev to advise on reforms and foreign policy issues. The Ukrainian president was keen on the former British PM joining his group of foreign advisors, describing Blair as “a true friend” and wanting him to “share his experience of public administration.”

Meanwhile in the UK, some have called for Blair to stand trial for war crimes over the consequences of his actions in the invasion of Iraq, which the upcoming Chilcot inquiry report is expected to reveal.

Radoslaw Sikorski, former foreign minister of Poland:
Sikorski said he hoped Ukraine could “learn from the Polish experience” after being appointed to Poroshenko’s International Advisory Council for Reforms. During the Ukrainian crisis, the former Polish foreign minister called on NATO to threaten Russia militarily if necessary. His wife, American-Polish journalist Anne Applebaum, is equally hawkish in her views, having previously mentioned that Europe should prepare for “total war” with Russia.

Melanne Verveer, a Ukrainian-American protégée of Hillary Clinton:
Melanne Verveer is the executive director of the Georgetown Institute for Women, Peace and Security at Georgetown University. Beginning in 2009, she served as the first United States Ambassador-at-Large for Global Women’s Issues. In 2001, Verveer co-founded with Hillary Clinton ‘Vital Voices Global Partnership’, a global NGO that supports emerging women leaders. She served as as assistant during the term of President Bill Clinton and chief of staff to  First Lady Hillary Clinton.

John McCain, U.S. Senator (Republican, Arizona):
Invited by Poroshenko in May 2015, the politician has said he was “deeply proud to be a friend to Ukraine,” and wanted to help Kiev “in the face of Russian aggression.” McCain was unable to join Poroshenko’s group of advisors due to such a move being illegal under the US constitution, but he vowed to “continue to do everything I can to stop Vladimir Putin’s unabated aggression.” 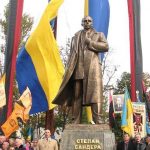 Ukraine’s struggle with the past is ours, tooUkraine 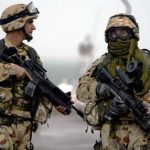 The Obama shoe-banging moment on the Ukrainian front: Dutch and Australian troops were planning to start war with Russia after MH17 was shot downMalaysia Airlines crash