Australia has prosecuted a brave individual. People who speak up keep getting arrested 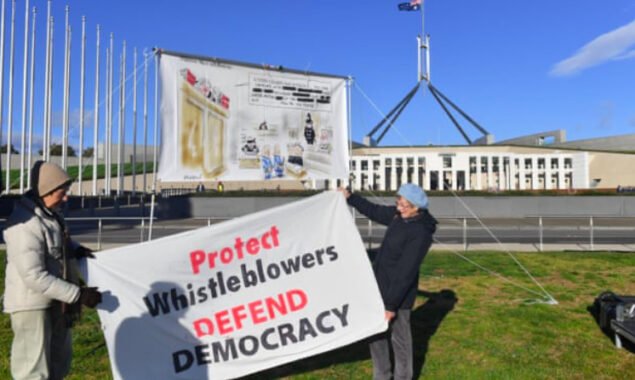 Sitting in the magistrates court in Canberra this week, I felt like I was watching a scene from Franz Kafka’s The Trial – the famous novel in which a man is arrested and prosecuted by a mysterious authority for an unknown crime.

Sitting in the magistrates court in Canberra this week, I felt like I was watching a scene from Franz Kafka’s The Trial – the famous novel in which a man is arrested and prosecuted by a mysterious authority for an unknown crime.

Separated from observers by a makeshift black partition sat Witness K, a former intelligence officer. Black tape obscured glass in the courtroom doors and masked security cameras. For the first time in court proceedings that have meandered since charges were laid in 2018, Witness K’s voice was heard: “Guilty, your honour.”

He should never have been prosecuted.

This case has been a tale of espionage, intrigue, conspiracy and secrecy. But at its heart, the prosecution of this whistleblower is a damning indictment on the government that approved it, the laws that enabled it and the secrecy provisions that kept much of it hidden from public view. This is not how our democracy should work.

It was a story that began in the heat of Dili in 2004. Australia’s war-torn neighbours were rebuilding from the conflict with Indonesia that had precipitated Timor-Leste’s independence. Crucial to that reconstruction project were the royalties to natural resources – oil and gas – that sit beneath the Timor Sea.

It was, and remains, a stain on Australia’s conscience. But rather than apologising, our government has doubled down – refusing to admit any wrongdoing while prosecuting the people who exposed it.

The prosecutions of Witness K and his former lawyer, Bernard Collaery, have been battles of attrition, with dozens of court appearances – many held in secret – and interlocutory applications. The government has spent millions in legal fees.

While Witness K’s pro bono counsel, Robert Richter QC, sought non-conviction and a good behaviour order, a much heftier penalty was imposed by Theakston (although not as severe as the maximum possible two-year jail term).

Meanwhile, Collaery has pleaded not guilty, and is appealing secrecy orders imposed in his case. The dispute seems destined to go to the high court, where Australia’s apex court will be required, by law, to hear the matter behind closed doors. So much for open justice.

There is immense public benefit in knowing about wrongdoing committed in our name. There is no public interest in prosecuting the brave individuals who expose it. Such prosecutions also have a chilling effect on the willingness of other Australians to speak up.

Witness K and Collaery are not our only truth-tellers to be prosecuted. Richard Boyle blew the whistle on unethical debt recovery practices at the tax office; he has been vindicated by several independent reviews but will endure a weeks-long criminal trial in Adelaide scheduled for September.

Former army lawyer David McBride spoke up about war crimes allegedly being committed in Afghanistan; he too has been vindicated and he too faces trial for speaking up.

Legally, the public interest is what guides prosecutorial action. Prosecutors can drop a prosecution at any time before trial if they determine the case is no longer in the public interest. For Witness K, it is too late. For Collaery, Boyle and McBride the clock is ticking. Their prosecutions should be dropped immediately.

We cannot rewrite history, and the stain of Witness K’s prosecution cannot be erased. But we can change the law to ensure people are protected, not punished, when they speak up about wrongdoing in the future.

First, our federal whistleblowing law should be urgently reformed. Five years ago, an independent review told the government that the Public Interest Disclosure Act was broken and needed to be fixed. The experience of whistleblowers was not a happy one, it said. Half a decade later, the government is happy to green-light whistleblower prosecutions but has not changed the law to make it easier for whistleblowers to speak up lawfully.

Second, the National Security Information Act, which has enabled much of the K and Collaery cases to be heard behind closed doors, must be amended to better safeguard open justice. A balance can and should be struck that protects national security without sacrificing this fundamental democratic principle. As was alarmingly underscored by the Witness J case – a different ex-spy, who was charged, sentenced and imprisoned in complete secrecy – the NSI Act gets the balance completely wrong.

Last, prosecutorial guidelines should be revised to recognise the vital democratic role played by those who speak up about wrongdoing. Our regulators need to do a better job supporting, empowering and protecting whistleblowers. Almost every Australian employee has whistleblower rights on paper. But these have not worked well enough in practice.

People who speak up about serious wrongdoing do the right thing. They are crucial agents of democracy. And yet they keep being arrested.

Reform is urgently needed to protect Australia’s whistleblowers and to stop these Kafkaesque scenes reoccurring in our courtrooms.

Kieran Pender is a senior lawyer with the Human Rights Law Centre, leading its work on whistleblower protections

Headline photo: “This case has been a tale of espionage, intrigue, conspiracy and secrecy. But at its heart, the prosecution of this whistleblower is a damning indictment on the government that approved it, the laws that enabled it and the secrecy provisions that kept much of it hidden from public view.” Photograph: Mick Tsikas/AAP