Australia and US: Military Pact or Sinister Plot? 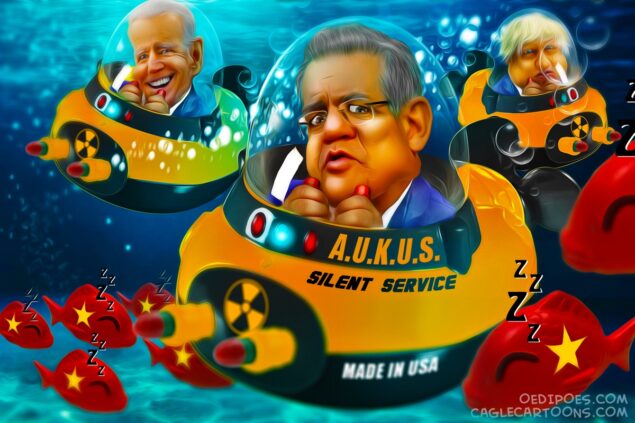 On September 15th, 2021, the heads of government of Australia, the United Kingdom and the United States announced the formation of AUKUS, “a new enhanced trilateral security partnership” between these three countries. Australia’s Prime Minister Scott Morrison and Britain’s Prime Minister Boris Johnson joined U.S. President Joe Biden to “preserve security and stability in the Indo-Pacific,” as Johnson put it.

Clear Away the Hype: The U.S. and Australia Signed a Nuclear Arms Deal, Simple as That

On September 15th, 2021, the heads of government of Australia, the United Kingdom and the United States announced the formation of AUKUS, “a new enhanced trilateral security partnership” between these three countries. Australia’s Prime Minister Scott Morrison and Britain’s Prime Minister Boris Johnson joined U.S. President Joe Biden to “preserve security and stability in the Indo-Pacific,” as Johnson put it.

While China was not explicitly mentioned by these leaders at the AUKUS announcement, it is generally assumed that countering China is the unstated motivation for the new partnership. “The future of the Indo-Pacific,” said Morrison at the press conference, “will impact all our futures.” That was as far as they would go to address the elephant in the room.

Zhao Lijian of the Chinese Foreign Ministry associated the creation of AUKUS with “the outdated Cold War zero-sum mentality and narrow-minded geopolitical perception.” Beijing has made it clear that all talk of security in the Indo-Pacific region by the U.S. and its NATO allies is part of an attempt to build up military pressure against China. The BBC story on the pact made this clear in its headline: “Aukus: UK, US and Australia launch pact to counter China.”

What was the need for a new partnership when there are already several such security platforms in place? Prime Minister Morrison acknowledged this in his remarks at the press conference, mentioning the “growing network of partnerships” that include the Quad security pact (Australia, India, Japan and the United States) and the Five Eyes intelligence-sharing group (Australia, Canada, New Zealand, the UK and the United States).

A closer look at AUKUS suggests that this deal has less to do with military security and more to do with arms deals.

In 2016, the Australian government made a deal with France’s Naval Group (formerly known as Direction des Constructions Navales, or DCNS) to supply the country with 12 diesel-electric submarines. A press release from then Prime Minister Malcolm Turnbull and his minister of defense (who is the current minister of foreign affairs) Marise Payne said at the time that the future submarine project “is the largest and most complex defence acquisition Australia has ever undertaken. It will be a vital part of our Defence capability well into the middle of this century.”

Australia’s six Collins-class submarines are expected to be decommissioned in the 2030s, and the submarines that were supposed to be supplied by France were meant to replace them. The arms deal was slated to cost “about $90 billion to build and $145 billion to maintain over their life cycle,” according to the Sydney Morning Herald.

Rwanda in Mozambique and the French on Top • @vijayprashad • https://t.co/WIHiD5mXyS

Vijay Prashad: Rwanda entered Mozambique in July, followed by SADC forces. France got what it wanted: Its energy giant can now recoup its investment. https://t.co/E6krdj5BX7 pic.twitter.com/mteBWszV7c

Australia has now canceled its deal with the French to obtain the nuclear-powered submarines. These new submarines will likely be built either in the U.S. by Electric Boat, a subdivision of General Dynamics, and Newport News Shipbuilding, a subdivision of Huntington Ingalls Industries, or in the UK by BAE Systems. BAE Systems has already benefited from several major submarine deals.

The AUKUS deal to provide submarines to Australia will be far more expensive, given that these are nuclear submarines, and it will draw Australia to rely more deeply upon the UK and U.S. arms manufacturers. France was furious about the submarine deal, with its Foreign Minister Jean-Yves Le Drian calling it a “regrettable decision” that should advance the cause of “European strategic autonomy” from the United States. Words like “betrayal” have flooded the French conversation about the deal.

Australia ratified the NPT in 1973, and it is also a signatory to the Treaty of Rarotonga (1985), or the South Pacific Nuclear-Free Zone Treaty. It does not have nuclear weapons and has pledged not to have nuclear material in the South Pacific. Australia is the second-largest producer of uranium after Kazakhstan, and most of this nuclear material is sold to the UK and the U.S.

For the past several decades, Australia has been considered a “nuclear threshold” state, but it has opted not to escalate its nuclear weapons program. The three heads of government of Australia, the U.S. and the UK made it clear that the transfer of the nuclear-powered submarines is not the same as the transfer of nuclear weapons, although these new submarines will be capable of launching a nuclear strike. For that reason, not only China but also North Korea has warned about a new arms race in the region after the AUKUS submarine deal.

Morrison admitted during a September 16th press conference that his country has already spent $2.4 billion on the French submarine deal. He did not, however, answer a journalist’s question as to what the ultimate price tag would be for the UK-U.S. nuclear-powered submarines. He asked his Secretary of Defense Greg Moriarty to answer it, to which Moriarty spoke about task forces “that will set up a number of working groups” with the U.S. and UK to look into several issues relating to the deal; but Moriarty also did not touch on the topic about the price tag.

One of the questions asked at the press conference with regard to the cost to Australian taxpayers was whether Australia would buy the Astute (UK) class submarines or the Virginia (U.S.) class, since this decision has a bearing on the cost. The Virginia class submarine, according to a recent U.S. Congressional Research Service study, costs $3.45 billion per vessel. To this must be added the cost of upgrading the naval bases in Australia and the cost of running and maintaining the submarines. The U.S. and the UK firms will make considerable profits from this deal.

Ever since the Australians signed the deal with the French, media houses associated with the U.S.-based Rupert Murdoch have attacked it. Any small delay was picked up to be clobbered, and any adjustment to the contract—including a change in contract proposed on March 23rd, 2021—became front-page news. Aware of the problems, France’s Foreign Minister Le Drian spoke to U.S. Secretary of State Antony Blinken in Paris on June 25 about the deal.

He told the French-speaking Blinken that the submarine contract is not only a French one but also a French-U.S. partnership since Lockheed Martin is party to the deal. French attempts to get U.S. buy-in to the deal came to nothing as the Biden administration was already in talks with the UK and Australia on their own regarding the AUKUS deal. That is why the language of “betrayal” is so pronounced in Paris.

On September 16th, the Australian and U.S. governments released a joint statement that included a direct attack on China, with reference to the South China Sea, Xinjiang, Hong Kong, and Taiwan. Two days later, an article in Australia’s leading newspaper, the Australian, by Paul Monk, who is the head of the China Desk at Australia’s Defence Intelligence Organization, stated that his government should “facilitate a coup within China’s Communist Party.” This is a direct call for regime change in China by Australia.

The belligerent language from Australia should not be taken lightly. Even though China is Australia’s largest trading partner (both in terms of exports and imports), the creation of these new military pacts—with a nuclear edge to them—threatens security in the region. If this is merely an arms deal hidden behind a military pact, then it is a cynical use of war-making rhetoric for business purposes. This cynicism could eventually lead to a great deal of suffering.