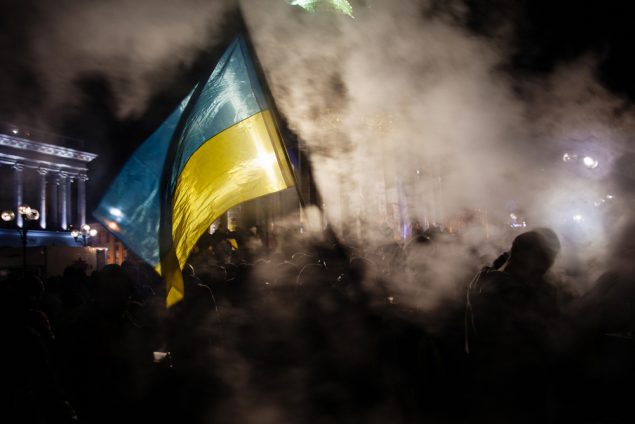 Written exclusively for the New Cold War website, this month our regular contributor Dmitriy Kovalevich discusses the absence of any change in Ukraine’s official media policy since the election and to make matters even worse, the recent banning of Rabochaya Gazeta – The Workers Newspaper – for having included quotes from Marx, Engels, Lenin and others, under the crude guise of “decommunization”.

In addition to a change of power in Ukraine, many had also anticipated and hoped for change in official media policy too, but these expectations are far from being fulfilled. Indeed, the media is still only allowed to function within the limitations prescribed by the government and far right militants and although we are dealing with a change of personalities they are nevertheless continuing to promote the old policy.

In August, Zelensky’s advisor and elected deputy from his party, Nikita Poturayev, stated [1] that the ban on some social networks and media will not be lifted because they are the “enemy’s weapon.”

On July 30, neo-Nazi militants from the group Tradition and Order attacked [2] a press conference of the Ukrainian state agency Ukrinform, smashing equipment and injuring three journalists. Although the new president condemned the assault, no legal prosecution followed as the culprits were considered to be “defenders of Ukraine”; that is, veterans of the war against Donbass.

Also, during the month of August, an MP from the People’s Frontparty went so far as to [3] publicly call for two Ukrainian TV channels (Newsone and 112-Ukraine) to be “blown up” or set on fire using grenade-launchers, for allegedly “working for Russia.” One of the TV channels (112-Ukraine) was actually targeted [4] a month ago using a grenade-launcher but no suspects were found.

Meanwhile, many opposition journalists, accused of treason by the former Kiev regime, remain in prison. The Swiss human rights organization ‘Solidarity Net’ recently recognised [5] Kiril Vyshyncsky as a political prisoner. A journalist, he was accused of treason for having written articles “that may threaten Ukraine’s image” and in doing so assist Russia. This weird logic apparently justifies any kind of prosecution or attack on the Ukraine media. He was only released -albeit on bail- at the end of August, having already spent 1.5 years in custody.

A further example of the continuation of the old policy of oppressing the opposition media is the case of the Rabochaya Gazeta (The Workers Newspaper). Published since 1957, it is the oldest existing Ukrainian unionist and Leftist media outlet of its kind in the country. Even so, since 2014 there have been repeated attempts to close it, and numerous legal cases have been brought against it. Finally, on August 19, a Kiev court took the decision to ban this left-wing paper. “Linguistic experts” had manipulatively interpreted [6] the paper’s pleas to “fight against inequality” that regularly appeared in the newspaper, as “calls for the violent seizure of power.”

Commenting on the decision, Petro Symonenko, leader of the banned Communist Party of Ukraine, said [7], “Today, on August 19, 2019, the Kiev District Administrative Court has granted an appeal by the Ministry of Justice and the Security Service of Ukraine to stop the publication of the Rabochaya Gazeta. This confirms our suspicions that with the advent of the so-called “new faces” in the country’s leadership, the essence and nature of the ruling regime (and its “guards” from the Security Service, Prosecution Office and the Ministry of Internal Affairs, the courts and other punitive structures) have remained the same. In fact, the current government is no different from the previous criminal regime of collaborators and puppets of international capital and the US State Department and, no matter what statements the representatives of the “new” regime made during the electoral campaign, its essence remains the same and this should not mislead anyone.”

According to Symonenko, due to the newspaper’s sharp criticism of Ukraine’s neoliberal reforms and glorification of the neo-Nazis, it had become a ‘bogeyman’ for the country’s rulers. Furthermore, he describes the decision as a ban on the work of decent journalists, crudely masked as “decommunization.”

Moreover, the newspaper’s website, http://rg.kiev.ua has been suspended and no longer functions.

Earlier in the month, the newspaper staff issued an appeal for solidarity from international journalist organisations:

The investigation department of the Security Service of Ukraine in Kiev and the Kiev region opened criminal proceedings against Rabochaya Gazeta as a consequence of the adoption of the law on “decommunization.”

The Rabochaya Gazeta is charged with the publication of materials aimed at protecting the social and labour rights of employees and self-employed citizens, against the militarization of politics and the economy, for ending the war and the establishment of peace, as well as materials in which the authors urged the Poroshenko regime to fulfil international obligations ratified by Ukraine, including the Minsk Agreement, the European Charter for Regional Languages and others.

Moreover, the Workers Newspaper is accused of quoting prominent social democrats of the 19th and 20th centuries. These are primarily the communist classics, K. Marx and F. Engels, as well as V. I. Lenin (Ulyanov) and other prominent figures of Russian and Ukrainian social democracy. These were used to justify the predatory colonial nature of capitalism and its imperialist stage and furthermore, the need to remove oligarchic capital from power and transfer it into the hands of wage earners, transferring it to a society of social justice and to a society of equal rights and opportunities.

On 02/07/2019, the Investigative Department of the Security Service of Ukraine in Kiev and the Kiev region sent a letter to the Ministry of Justice of Ukraine in order to consider initiating a procedure for stopping the release of the Workers Newspaper through the court. Based on this application of the SBU and the above expertise, on 04/15/2019 the Ministry of Justice of Ukraine appealed to the District Administrative Court of Kiev with a lawsuit to stop the publication of the newspaper Workers Newspaper, including referring to the Law “On the condemnation of the communist and national socialist (Nazi) totalitarian regimes in Ukraine and the prohibition of propaganda of their symbolism.”

For our part, we recall that on December 18, 2015, the European Commission “For Democracy through Law” (the Venice Commission) adopted the Conclusion on the inconsistency of the Law of Ukraine “On the condemnation of the communist and national socialist (Nazi) totalitarian regimes in Ukraine and the prohibition of propaganda of their symbols” to the Council of Europe standards. In this Conclusion the Council of Europe made the number of fundamental recommendations to bring the legislation of Ukraine in compliance with European standards.

The Venice Commission pointed out that the regulation introduced by the Law affects human rights, in particular the right to freedom of expression, freedom of association and assembly, electoral rights, therefore it must comply with the requirements established by the Convention for the Protection of Human Rights and Fundamental Freedoms and other regional and international human rights instruments.

However, on the basis of this law, the Communist Party was not allowed to participate in parliamentary and presidential elections, and millions of Ukrainian citizens who profess left-wing views were deprived of their constitutional right to freedom of choice and the opportunity to vote in accordance with their views. Moreover, as practice has shown, the above law does not apply to neo-Nazi parties and Nazi symbols.

The next hearing to ban the Workers Newspaper is scheduled for August 19, 2019.

The team of the Workers Newspaper invites representatives from international human rights organizations, the UN office and the OSCE monitoring mission, to participate in this court session.

Staff of The Workers Newspaper

With August came the first 100 days of the new presidency but even so we still see the continuation of the same policy in media: suppression of dissident voices and attacks on opposition media.