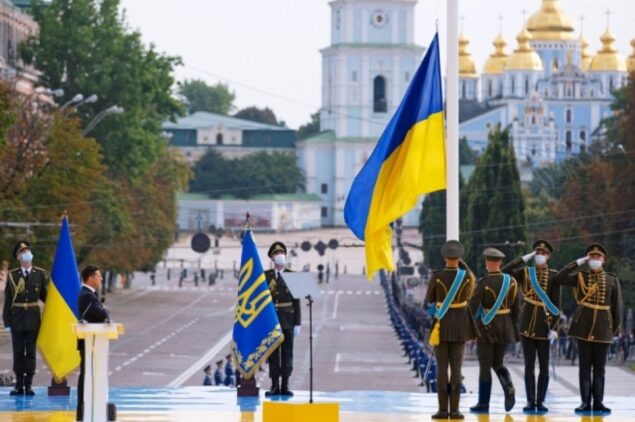 Ukraine’s independence has been represented for 30 years as if it was not the decision of Soviet officials but the result of a long, armed struggle. This month, Dmitriy Kovalevich offers NewColdWar’s readers his exclusive analysis of the ongoing contradictions facing the country as it celebrate’s thirty years of so-called independence.

In August 2021, Ukraine pompously celebrated its thirtieth anniversary of independence. Paradoxically, in this case, independence is marked by the state, which until 1991 had its own place in the UN (apart from Russia) and was headed after 1991 by the same person who headed the country before—Leonid Kravchuk. Independence has been represented for 30 years as if it was not the decision of Soviet officials but the result of a long, armed struggle.

Manipulated from rich to poor

In March 1991, the majority of Ukrainians (81%) voted for keeping Ukraine within the USSR on the basis of a declaration of sovereignty. [1] In December of the same year, a second referendum was held, at which the question was changed: do you support the declaration of sovereignty adopted by the parliament of Ukraine? The majority also answered in the affirmative. In the course of the second referendum, Ukrainians were somewhat manipulated: they were told that nothing in their lives would change. Ukraine was previously a formally independent state with its own place in the UN, and instead of the USSR there would now be another union – the CIS – just a change of abbreviation, as the authorities of Soviet Ukraine said at the time. Thus, in 1991, many were misled by the manipulation of the terms, “independence”, “sovereignty” and “union”. Formally, Ukraine is still a member of the CIS along with Russia, although it has turned out to be a totally dead and non-functioning union.

The result was, however, according to the UN, the transformation of Ukraine from one of the richest republics of the USSR into the poorest country on the European continent. During the same 30-year period (1922 – 1952), the Soviet Union, under sanctions and surviving the devastating World War II from which it emerged victorious, became a world superpower and independently carried out industrialization.

Over the same period, Ukraine has lost a significant part of its population, together with most of its industry and trade potential.

The steep price of “independence”

Thirty years ago, Ukrainians were convinced that they could live without working, but receiving money for life as “dividends”. We were to be paid for our geographic location at the crossroads of trade routes. The media regularly spun tales about the legendary gold of the hetman Polubotok, which was allegedly taken to the Bank of England, and it was supposed to go with interest only to an “independent Ukraine.” [2] It was announced that, if the gold were returned, it would amount to 38 kilograms for each citizen of an independent Ukraine. This astronomical figure was about twenty times the world’s gold reserve. This is just an “urban myth”, but many Ukrainians at the time dreamed of living on the interest from this non-existent treasury. Moreover, the legend was supported by some activists from Canada’s Ukrainian diaspora. However foolish the legend may seem many were seduced by promises of the “aristocratic” life.

Recently, the second president of Ukraine, Leonid Kuchma, frankly admitted that 30 years ago they deceived Ukrainians, justifying their deception by the need to overcome pro-Soviet sentiments as the highest goal.

“You have to pay for everything. Including you have to pay for independence. Who will pay and what is the amount is another question. The largest amount was paid by ordinary people. Because they believe the promises … We, to some extent, have deceived these people when we said that Ukraine feeds all of Russia, we considered everything that is produced in Ukraine at world prices, and didn’t count what Russia supplied us for free”, recalls the former president. [3]

In the last years of the Soviet Union, Ukraine was intensively developed economically as it was supposed to be a “gateway” for economic relations with European countries (primarily the Eastern Bloc). In Ukraine, giant gas storage facilities, chemical plants, oil pipelines, and shipyards were built to improve the logistics of trading, East with West.

Then, in the 1990s, private owners denationalised and privatized hundreds of Ukrainian factories for a pittance and quickly hacked them into pieces, selling them as scrap metal. Miners were not paid for years, despite protest marches, mass starvation and suicides. Collective farms were emptied out. Most of the country’s cattle was slaughtered to facilitate the importation of meat. The Black Sea Fleet was sold out and, soon after that, Ukraine’s shipyards died. Scientific institutions, hospitals and schools received almost no money from the public budget – scientists and doctors were paid a pittance and rural teachers survived the 1990s by growing vegetables on plots near their houses.

The Ukrainian Telegram channel ZeRada sums up the results of the last 30 years: “So project “Ukraine” started 30 years ago. The project had an excellent outlook: a favorable geographical location, good climate, the best agricultural land in the world, developed industry, almost every kind of mineral, and most importantly – an educated and hardworking people […]. As a result, over 30 years, the “second France” has become the poorest country in Europe, overtaking Moldova… Almost all of the factories that had once been the envy of most countries in the world were closed or sold out. Within 30 years, the banking system has come under the control of foreigners. Medics migrate en masse and we do everything possible to send our children to study abroad. At the same time, the worse the situation, the louder the speeches about love for the Motherland and the patriotism of politicians, the higher the flagpoles with national flags, the more expensive the patriotic concerts.” [4]

According to the Kiev International Institute of Sociology (KIIS), 14.1% of Ukrainians consider themselves to be beggars (that is, their income is not even enough for food), 43.1% can buy only basic food, another 32.8% after spending on clothes and food cannot afford more meaningful purchases. [5] According to the United Nations Children’s Fund (UNICEF), nearly 10 million people are undernourished in Ukraine (the highest number on the continent) with 1.1 million people experiencing severe food shortages (ie: starvation). [6]

According to the Ukrainian State Statistics Service for 2021, only one percent of the country’s residents consider themselves to be middle class. [7] As many as 67 percent are below the poverty line. According to official data alone, over the past 20 years, the country’s population has decreased by eight million people (that is to say, by about 16 percent). And this does not take into account the millions of temporary labor migrants who travel to Russia or EU countries for seasonal work. What’s more, Ukraine’s authorities are even encouraging people to migrate in order to decrease the level of social tension inside the country, while making it someone else’s problem.

The population census that never happens

This year, the UN once again demanded that Kiev conduct a population census. [8] It has not been held for 20 years since it became clear that the country was losing citizens. Kiev regularly justifies its refusal to hold a census by claiming a lack of funds, although these are carried out regularly even in poor third world countries. Obviously, a census would show depopulation, something that would become another argument by opponents to Ukrainian nationalism inside the country. However, there is one further reason not to conduct a census: the UN and other international institutions provide assistance to the Kiev authorities, based on official statistics. So, where there was once 40 million, only 25 remain, but they are still receiving aid for 40 million wih the remainder going into the pockets of officials.

Now Ukraine is almost the only country in the post-Soviet space that during 30 years of independence has not yet reached the economic level of the late 1980s.

In addition, in recent years Ukraine has accumulated an impressive national debt. At the end of December 2020, it had reached 60.8% of the country’s GDP. Payments on the state debt in 2021 will amount to about 64.42% of the revenues of the general fund of the public budget of Ukraine. [10]

The Ukrainian political scientist Andrey Zolotarev notes, “If Ukraine follows the same course as all previous 30 years of independence, it will collapse. Perhaps the state will be packaged in some more or less decent form, but it will not be economically connected. De facto, the Ukrainian state is now connected only by the police, monetary unit, armed forces and trade networks, but the economic cohesion of the state is weakening.” [11]

Ukraine’s “independence” now lies in the fact that the country submits its public budget for approval by the IMF. In other words, it is not the elected deputies or the government that decides how much money should be allocated for education or healthcare, the police or the road construction.

The Ukrainian economy is extremely dependent on external investments. The country, in fact, lives from one IMF payout to the next. And the receipt of these tranches depends on the conditions set by the Fund, the European and American partners of Kiev.

In July 2020, the Social Monitoring Center conducted a survey, according to which only 22.5 percent of Ukrainian citizens consider the country to be truly independent. 66.5 percent perceive Ukrainian sovereignty as a fiction. [12] The respondents named the IMF, the United States and the European Union as the main forces that, in their opinion, control Ukraine.

Hence, we can summarize that, for the past 30 years the usual colonization and policy of Western imperialism, has in fact been hidden under the brand of “independence”.

Headline photo: Ukrainian President Volodymyr Zelenskyy, center, at an event in Kiev to mark Ukraine’s Independence Day. In the background is the Mikhailovsky Golden-Domed Monastery, which was considered the family abode of the family of Russian princes Svyatopolk in the 12th century and is one of the symbols of Russian statehood. RIA News 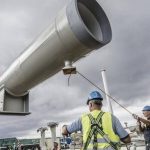 July update: US-German deal over Ukraine and beyond; permission for Nord Stream in exchange for support of a neo-Nazi concept in Eastern EuropeDmitriy Kovalevich, Ukraine, Ukraine Updates 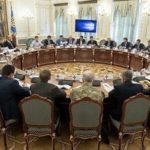