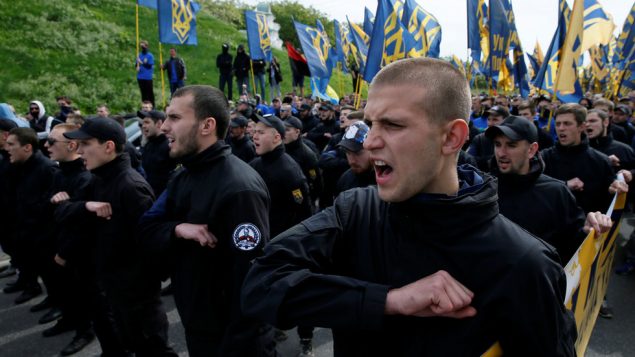 So now we have NATO’s propaganda wing defending Ukraine’s neo-Nazi ‘Azov Battalion,’ using a piece written by a man who once literally organized rallies to keep the US-led alliance out of Crimea. You couldn’t make this up.

So now we have NATO’s propaganda wing defending Ukraine’s neo-Nazi ‘Azov Battalion,’ using a piece written by a man who once literally organized rallies to keep the US-led alliance out of Crimea. You couldn’t make this up.

If you ever needed proof that the think tank business is little more than a cynical racket, this is it. An op-ed that exposes the rot at the heart of the swindle.

Even by the low standards of the US/UK think tank grift, it’s something else, running the full gamut of integrity from Y to Z. It also exposes the ambidextrous and duplicitous nature of much dogma in the former Soviet space. A part of the world where loyalties and worldviews can change utterly, depending on which direction the wind is blowing.

In this case, the author concerned has managed to flip from promoting the philosophy of the ‘Eurasian Movement’, connected to Alexander Dugin to sympathizing with Ukrainian fascists. Dugin is a controversial thinker who western media has often erroneously associated with Kremlin policy, with him being labeled “Putin’s brain” or “Putin’s Rasputin.”

From the guy who publicly compared the Odessa fire victims to vermin. And before co-organized, w Andreas Umland, a campaign to go easy on the Ukrainian far right in the media. ⁦⁦⁦@AtlanticCouncil⁩ at its “best.” ⁦⁦⁦⁦@yashalevine⁩ https://t.co/PZ2fR6GNeA

The Atlantic Council clearly wants to protect the Azov from being designated a “foreign terrorist organization” in the US. A measure suggested by Democratic Party Congressman Max Rose and former FBI agent Ali Soufan in a New York Times article where they dubbed the Ukrainian outfit “a paramilitary unit” notorious for its “association with neo-Nazi ideology.”

Their primary concern was its association with other white supremacist groups worldwide. Azov’s connections to this murky world are not in question. For instance, British investigation group Bellingcat, hardly a friend of Russia, describes it as a “Ukrainian white nationalist movement” which aspires to assist a “world conservative revolution,”aiming to “defend the white race.”

The Atlantic Council goes to bat for the neo-Nazi Azov Battalion, claiming that listing it as a terrorist organization would be a “gift to the Kremlin.” https://t.co/5yddcMBdZK

Making things even more bizarre is the fact the defense is illustrated with a picture showing an Azov fighter wearing its regimental symbol, which is extremely similar to a Nazi ‘Wolfsangel.’ The Atlantic Council also insists the controversial group is part of the Ukrainian National Guard, overseen by the Ministry of Internal Affairs. As if this somehow makes its extremism more palatable.

It then spends hundreds of words whitewashing Azov, with not so much of a mention of its preponderance for torchlight parades, and other events associated with Nazi symbolism.

Indeed, even US state broadcaster RFE/RL has reported on this sort of thing, dubbing Azov an “ultranationalist group” and a “fearsome far-right military force.”

The Atlantic Council’s stance is shameful, although hardly unexpected from an outfit of such questionable principles. A money machine which profits immensely from its information war against Russia: its annual revenue jumped from $2 million to $21 million during the period from 2006-2016.

This is presumably even higher now, as anti-Russia hysteria has intensified in the US, partly driven by the think tank itself.

Yet, the most interesting thing here is the author and the manner in which he has managed to find a place on the think tank gravy train. Exhibiting enough ideological flexibility to make a chameleon’s head spin. Anton Shekhovtsov, who has notably lobbied for London’s pro-Brexit Legatum along with Anne Applebaum and Peter Pomerantsev, has one hell of a background.

Back in the mid-2000s, he was involved with the International Eurasian Movement’s youth wing in Crimea, when it was part of Ukraine. Known as the “Eurasian Youth Union” (ECM in Russian), it’s a right-wing organization which believes in a “Greater Russia” and largely follows the teachings of the aforementioned Dugin.

The modern form of this principle believes Russia, and Ukraine, to be culturally closer to Asia than to Western Europe. Which certainly runs against mainstream opinion in both states. In 2011, it was banned in Ukraine, after the Kiev government of Viktor Yanukovich (eventually ousted by the Western-backed Maidan) branded it an “extremist anti-Ukrainian organization.”

Back in 2006, Shekhovtsov was helping to organize an “anti-NATO weekend” in Sevastopol, Crimea’s main port, which involved a “solemn procession along the city ring with flags and banners (of the Eurasian Movement),” according to contemporary accounts.

During the “festivities” Shekhovstov’s comrades even managed to keep the place an EU-free zone. “The appearance of the blue flag of the Atlanticist European Union was suddenly noticed at the other end of the square,” a report detailed. “A group of activists of the Young Guard and the ECM was immediately sent. And, as a result of peaceful negotiation, the EU representatives left the square, frightened by the pressure of the Eurasian forces.”

Shekhovstov was present at the event, as documented in photographs freely available online. However, just eight years after standing against the West in Crimea, he found himself attached to Legatum, working as an “information warrior”during the 2014 Ukraine crisis.

According to the Canadian scholar Ivan Katchanovski, he was “cheering the mass killing of people in Odesa (sic), (and) whitewashing or denying far-right involvement in the Maidan, the Odessa massacre and the war in Donbas (sic).”

In addition to his association with Atlantic Council, Shekhovtsov is today an external lecturer at the University of Vienna and a “senior fellow” at the “Free Russia Foundation.” This is a US “regime change” pressure group, where a few Russian employees are put out “front of house,” but the backbone is full of Americans, many of them regulars on the lobbying circuit. Including at least one has never been to Russia and can’t speak a lick of the language. Furthermore, there’s only one Russian on the board of directors. Which gives you an idea of the real agenda at play.

Good grief: an @AtlanticCouncil oped defends the neo-Nazi-linked Azov battalion. The current state of play is that the US Congress has banned any "arms, training, or other assistance" to the battalion due to allegations of white supremacism. https://t.co/e36LpyN4rh.

The Anglo-American think tank racket is a small, but lucrative, world, where decency, honesty, and probity are far from priorities. Yet, even allowing for this, the Atlantic Council has reached a new low this week. Do its biggest financial backers, such as Facebook and the British Foreign Office, which give it over $1 million annually, share its support of white supremacist neo-Nazis?

Bryan MacDonald is an Irish journalist based in Russia. He previously worked in Ireland for the Evening Herald, Ireland On Sunday and the Irish Independent. He also written for The Irish Examiner, The Star and The Dubliner magazine, as well as being a regular guest on Irish radio networks RTE and Newstalk. 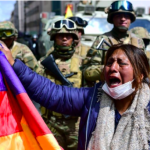 ‘The OAS has a lot to answer for’: new MIT study disputes key claim that paved way for right-wing coup in BoliviaBolivia, Foreign intervention, Imperialism, Issues 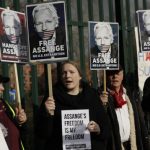