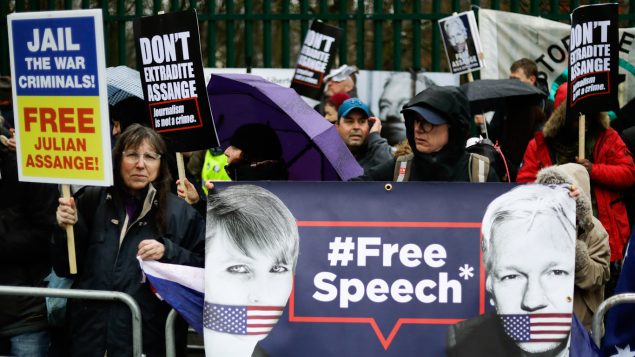 Supporters hold placards and banners during a protest against the extradition of Wikileaks founder Julian Assange outside Belmarsh Magistrates Court in London, Monday, Feb. 24, 2020. The U.S. government and WikiLeaks founder Julian Assange will face off Monday in a high-security London courthouse, a decade after WikiLeaks infuriated American officials by publishing a trove of classified military documents. (AP Photo/Matt Dunham)

The extradition trial of Julian Assange began with the prosecution reading out a damning statement from five leading mainstream media organizations, The Guardian, The New York Times, El País, Der Spiegel and Le Monde, all newspapers that once partnered with Wikileaks.

The extradition trial of Wikileaks co-founder Julian Assange got underway at Woolwich Crown Court in London today. Assange, 48, is wanted by the U.S. government on 18 charges of hacking and breaches of the Espionage Act, specifically for the publication of evidence leaked by Pvt. Chelsea Manning that detailed evidence of American war crimes in the Middle East. If found guilty he faces up to 175 years in prison.

The prosecution, led by James Lewis, Q.C., began by reading out a damning statement from five leading media organizations, The Guardian, The New York Times, El País, Der Spiegel and Le Monde, all of whom had partnered with Wikileaks, gratefully publishing the group’s revelations but now condemned them, helping his prosecution.

“We deplore the decision of WikiLeaks to publish the unredacted state department cables, which may put sources at risk,” they said. The prosecution is alleging that Assange recklessly published a huge trove of documents containing the names of American agents and informants, putting their lives in danger, and that he solicited information from Manning, encouraging her to break the law. That neither were in the United States when this took place, Lewis said, was irrelevant, as Manning was still a member of the U.S. armed forces. Therefore, he told the court, the case was one of “straightforward criminality.”

Many mainstream outlets like the BBC and The Guardian also framed Assange as having “put lives at risk” – echoing the attack from the prosecution in their headlines. Media were also strongly supportive of his arrest from the Ecuadorian embassy last year, celebrating that the “delusional, childish narcissist” poisoning America with his “vile spite” was finally about to “face justice.” Former Newsweek journalist Tareq Haddad noted that the press room was packed for the U.S. government prosecution team’s statements but was half empty by the time the defense began.

Breaking: @khrafnsson leaves courtroom and asks "why aren't we here talking in court about the war crimes, the assassination of innocent civilians?" #assange@TheCanaryUK pic.twitter.com/zXCRjqq5db

A crowd of supporters gathered outside the court, with only a few of those who showed up able to attend the events in person. Assange’s father, John Shipton, told those assembled that, “all of the bases for the prosecution’s accusations fail on accuracy and fact” and that sending his son to the United States would be a “death sentence.” The crowd kept up a constant stream of noise and chants were audible in the courtroom throughout the day. Eventually, the defense, including Assange himself, asked for them to keep quiet as it was interfering with proceedings.

The Trump administration's single most severe attack on press freedom (by far) is underway in London – the attempt to extradite & prosecute Julian Assange for working with his source to help her avoid detection, something all major media outlets do – and few US journalists care.

The prosecution finished much earlier than expected and by the afternoon the defense was presenting its case. Assange’s lawyer, Edward Fitzgerald, Q.C., stated that “This is not about criminal justice, it’s about making an example” of his client, adding that the charges were “grossly inflated.” Kristinn Hrafnsson, Icelandic investigative journalist and current editor-in-chief of Wikileaks, demanded to know “why aren’t we here talking in court about the war crimes, the assassination of innocent civilians?” The defense also argued that the defendant suffers from long term mental health problems, including clinical depression, which would no doubt be exacerbated by extradition. They noted that in 2013, U.K courts denied an American extradition request for British-Finnish hacker Lauri Love on mental health grounds.

The defense also revealed that they intend to call American linguist and political activist Professor Noam Chomsky as an expert witness and confirmed the story circulating that the Trump administration offered Assange a full pardon in exchange for a statement that Russia was not involved in hacking related to the 2016 elections. They did not accept the offer from former congressman Dana Rohrbacher as they felt it amounted to political extortion. Rohrbacher denies certain parts of the story.

Assange had been granted political asylum by the progressive Ecuadorian administration of Rafael Correa, but could not leave the country’s embassy in London for almost seven years. However, after Correa was replaced by the right-wing, pro-U.S. Lenin Moreno, his welcome ran out and he was dragged out the building last year. Since then, he has been held at Belmarsh Prison, London. The most infamous leak Wikileaks revealed was the “Collateral Murder” video, that showed American forces massacring civilians, including Reuters journalists, in cold blood.

The extradition hearing has been condemned by many international groups, including the Council of Europe and the United Nations. On Friday, Amnesty International’s Deputy Europe Director Massimo Moratti said:

The US government’s unrelenting pursuit of Julian Assange for having published disclosed documents that included possible war crimes committed by the US military is nothing short of a full-scale assault on the right to freedom of expression…The potential chilling effect on journalists and others who expose official wrongdoing by publishing information disclosed to them by credible sources could have a profound impact on the public’s right to know what their government is up to. All charges against Assange for such activities must be dropped.”

The court finished at around 4 p.m. local time and will resume at 10 a.m. tomorrow. The hearing is expected to last several weeks. 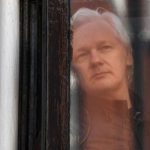 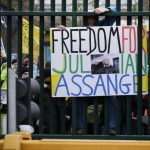