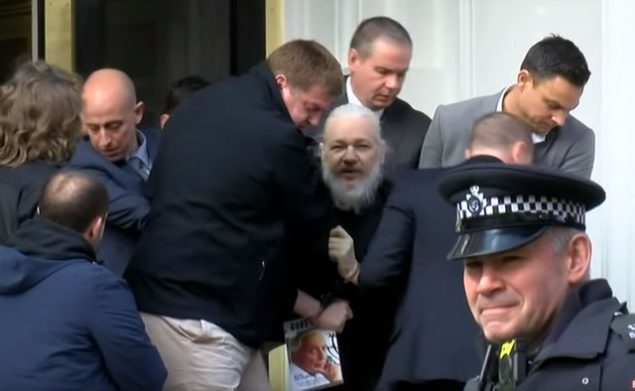 Assange arrested by the British police on April 11, 2019

By Laura Tiernan and Thomas Scripps

Fairbanks testified that Arthur Schwartz, a wealthy Republican Party donor and key Trump ally, had told her that Assange was taken from the Ecuadorian Embassy “on orders from the president.” The conversation between Schwartz and Fairbanks occurred in September 2019 and was recorded by Fairbanks.

Schwartz, a frequent visitor to the White House and “informal adviser” or “fixer” to Donald Trump Jr., told Fairbanks the president’s orders were conveyed via US Ambassador to Germany Richard Grenell, who brokered a deal with the Ecuadorian government for Assange’s removal. Grenell was appointed acting director of national intelligence by Trump in February this year, holding the position until May.

Assange’s lawyer, Edward Fitzgerald QC, spelled out the significance of Fairbanks’ disclosures, telling Judge Vanessa Baraitser they were, “evidence of the declared intentions of those at the top who planned the prosecution and the eviction from the embassy.”

Fairbanks, who writes for the pro-Trump Gateway Pundit, is a prominent Assange supporter who visited the WikiLeaks founder at the Embassy on two key occasions. Her evidence was read into proceedings yesterday afternoon unopposed, with Fitzgerald explaining, “My learned friend [James Lewis QC for the prosecution] reserves the right to say ‘because she’s a supporter of Julian Assange you must take that into account in weighing her evidence.’ But we say [her evidence] is true.”

Given her close connections to leading figures in the Trump administration’s fascistic entourage, Fairbanks is uniquely positioned to expose key aspects of the politically motivated vendetta against the WikiLeaks founder. Throughout the extradition hearing, lawyers for the US government have repeatedly claimed the charges against Assange under the Espionage Act are motivated by “criminal justice concerns” and are “not political.”

Fairbanks’ evidence shreds the official narrative of the Department of Justice (DoJ) that Assange was arrested on April 11, 2019 in relation to “hacking.” In a phone call with Schwartz on October 30, 2018, he made clear that Assange would be arrested as political payback for his role in “the Manning case,” i.e., the disclosure by US Army whistle-blower Chelsea Manning of US war crimes in Afghanistan and Iraq.

“He also told me that they would be going after Chelsea Manning,” Fairbanks recalled of her October 2018 phone conversation with Schwartz. This was one of several predictions by the Trump insider that were soon confirmed (Manning was re-arrested in March 2019), with Fairbanks concluding, “He knew very specific details about a future prosecution [of Assange] … that only those close to the situation then would have known.”

Fairbanks’ testimony provided chilling evidence of plans by the Trump administration to impose the death penalty. In his October 2018 phone call with Fairbanks, Schwartz said Assange would “probably” only serve life in prison, but went on to qualify this, “He told me that the US government has said they will not pursue the death penalty, something that would have prevented the UK and Ecuador from extraditing him here.”

Less than six months later, just hours after Assange’s seizure from the embassy, Fairbanks again messaged Schwartz to ask if he “knew anything.” “He responded with a series of messages about how Assange deserved a lethal injection and how both he and Manning should die in prison.” Further, “He sent me lots of messages about how everyone involved with WikiLeaks deserved the death penalty. I noted in our conversation that it had been reported that Grenell only got a verbal agreement that there would be no death penalty, nothing in writing. Schwartz’s response to this was to send me a shrug emoji and he continued his tirade about how Assange deserved to die.”

On January 7, 2019, Fairbanks travelled to London to warn Assange of US plans to seize him from the embassy and have him extradited to the US. They discussed quietly, Assange using “a little radio to cover up the conversation.” They exchanged written notes.

Fairbanks’ testimony recounts the extraordinary measures they faced during a second two-hour visit on March 25. She was left alone in a cold room for a full hour, while Assange was kept outside and subjected to a “full body scan with a metal detector” before being let in. The pair had only two minutes to talk. Fairbanks is later made to understand the reason for this aborted visit after Schwartz “called and informed me that he knew I had told Assange” during the earlier visit.

Fairbanks’ testimony provides insight into the criminal underworld surrounding the White House. After Trump fires National Security Adviser John Bolton and Grenell’s name is floated as a replacement, Fairbanks tweets about his involvement in Assange’s arrest, which elicits a “frantic” call from Schwartz. “He was ranting and raving that he could go to jail and that I was tweeting ‘classified information’… Schwartz informed me that in coordinating for Assange to be removed from the embassy, Grenell had done so on ‘direct orders from the president’” and that “other persons who Schwartz said might also be affected included individuals who he described as ‘lifelong friends’.”

In the first half of the day, Professor Christian Grothoff of the Bern University of Applied Sciences testified to the chronology of events leading up to the bulk release of unredacted US State Department cables in September 2011. He is a computer scientist with experience reporting on the Edward Snowden revelations. His evidence demolished the prosecution’s claim that Assange and WikiLeaks were responsible for this mass disclosure.

Grothoff explained that the cables were stored online by WikiLeaks and “encrypted with a cipher that made it basically useless to anybody that did not have the encryption key.” This was, he said, common practice when dealing with sensitive data that is too large to be sent between trusted parties by encrypted email.

When the WikiLeaks website came under attack in late 2010, limiting access to it, copies of the site began to be created by third parties. A minority of these third parties copied the encrypted documents, contrary to WikiLeaks’ instructions.

One of the people given the encryption key to these documents was Guardianjournalist David Leigh. In February 2011, he and fellow Guardian writer Luke Harding published a book titled WikiLeaks: Inside Julian Assange ’ s War on Secrecy, in which the key was revealed in full.

By late August 2011, the connection between Leigh’s key and the encrypted documents posted on copies of the WikiLeaks website, but outside of WikiLeaks’ control, was reported. On August 31 and September 1, the cables began to be published on sites like Cryptome and Pirate Bay. Only afterwards, on September 2, did WikiLeaks publish the cables, explaining their reasons in an editorial:

“Revolutions and reforms are in danger of being lost as the unpublished cables spread to intelligence contractors and governments before the public. The Arab Spring would not have started in the manner it did if the Tunisian government of Ben Ali had copies of those WikiLeaks releases which helped to take down his government.”

Grothoff’s testimony highlighted the central role played by David Leigh in these events. He explained, “As far as I can tell Mr. Leigh was one of the very few given access to the full set [of cables].” Assange, Grothoff said, based on the account provided by Leigh’s own book, was “very reluctant” to give the Guardian journalist this access. Substantiating that point, Summers referred to a section of Leigh’s book which reads:

“[Leigh] asked Assange to stop procrastinating and hand over the biggest trove of all: the cables. Assange said, ‘I can give you half of them containing the first 50 percent’ and Leigh refused. All or nothing, he said. ‘What happens if you end up in an orange jumpsuit en route to Guantánamo before you can release the full files?’… Eventually, Assange capitulated.”

In another section of the book, referred to by the prosecution, Leigh describes how “It had been a struggle to prise these documents out of Assange.” Just six months later, with WikiLeaks engaged in a long process of publishing safe and redacted documents with media partners around the world, Leigh published the password to the full online store of classified, unredacted cables.

Speaking outside the court, Assange’s father, John Shipton, said, “Today we had the prosecution trying to prove that water runs uphill and up is down. … The defence replied and conclusively demonstrated that it was David Leigh [who caused the unredacted cables to be released]. We can only conclude from the amount of time that the prosecution spent defending David Leigh that David Leigh is a state asset.”

At the end of the hearing’s morning session, an exchange between District Judge Vanessa Baraitser and the legal teams pointed to further restrictions being imposed on the defence’s ability to present its case.

Seizing on the delays caused by a potential COVID-19 outbreak in the first week of the hearing, Baraitser insisted that the defence prepare a timetable that allowed the hearing to “finish within two weeks.” When the defence replied that this would leave no time for closing submissions, she reacted enthusiastically to the suggestion of prosecution lawyer James Lewis QC that these could be submitted in written form and summarised in just half a day each for the prosecution and the defence. A final decision is forthcoming. 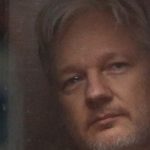 The US is using the Guardian to justify jailing Assange for life. Why is the paper so silent?Jonathan Cook, Julian Assange, Threats to journalism 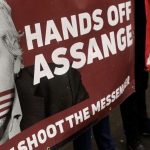