On Tuesday, American Secretary of State John Kerry spent four hours with Russian President Vladimir Putin in the Black Sea resort of Sochi. Kerry told reporters later that it was the beginning of new dialogue. He thanked Putin for giving him so much time.

The Russians too said the talks were “useful and positive.” They presented Kerry with a gift basket of potatoes.

Publicly, neither side spoke about Russia’s annexation of Ukrainian Crimea. Kerry, however, took the unusual step of chiding the Ukrainian government — for suggesting it might try to retake a rebel-occupied airport. [Donetsk airport, more on that story below.] 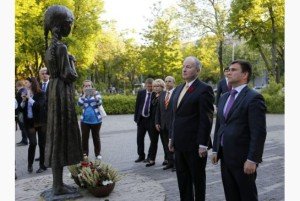 But there have always been divisions in the anti-Moscow alliance. European countries such as Germany have always been more hesitant. And now Washington is signalling that it too is interested in rapprochement.

The reasons are easy to understand. First, the U.S. needs Russia’s good offices if it to succeed in its war against the Islamic State. The key to that war is Syria and the key to Syria is its embattled president, Bashar Assad. The U.S. has no influence with Assad. Russia does. If Assad cannot be persuaded to compromise, then the Syrian civil war is doomed to continue. If the civil war continues, Islamic State militants based in Syria will continue to thrive.

If the Islamic State continues to thrive, the U.S. will defeat it only by sending in ground troops — something President Barack Obama does not want to do.

Second, economic sanctions against Russia aren’t working. True, they are causing hardship. Sanctions coupled with collapsing oil prices caused Russia’s economy to shrink by 2 per cent in the first three months of this year. But oil prices are stabilizing and Russia, a major petroleum exporter, is likely to rebound.

More to the point, sanctions haven’t worked politically. If anything, they have served to strengthen Putin’s popularity at home.

Most Western leaders, including Obama and Prime Minister Stephen Harper, boycotted Russia’s celebration marking the 70th anniversary of the Allied victory over Nazi Germany. Chinese President Xi Jinping did not. He and Putin stood shoulder to shoulder Saturday as Russian troops paraded through Moscow’s Red Square. Chinese and Russian naval forces are conducting joint naval exercise in the Black Sea.

The U.S. finds all of this alarming. It sees China, not Russia, as America’s chief geopolitical adversary. Already, China is flexing its muscles against U.S. allies like Japan and the Philippines. Beijing is also challenging America’s pre-eminence in the world economy. Much to Washington’s chagrin, even Britain, France and Germany have opted to join the new Chinese-dominated Asian Infrastructure Investment Bank.

All of this helps to explain why the U.S. wants warmer relations with Russia. But it is a desire not shared by Ottawa. Five months before an election, and with the votes of Ukrainian-Canadians firmly in mind, Harper’s government is happy to maintain its quasi-principled opposition to Russian aggression.

I say quasi because in some matters Ottawa has quietly bent those principles. Thus the government has imposed only partial sanctions against Russia energy giant Rosneft, which happens to own 30 per cent of an Exxon oil project in southern Alberta.

Otherwise, Canada’s leaders are cold warriors to the hilt. The Americans may choose to take a more measured approach to Russia. You won’t catch Canada’s government doing that.

Note by New Cold War. org editors: We reproduce the preceding column as a valuable contribution to needed discussion of the political crisis in Ukraine. We do not share the author’s view that the decision by the Crimean people in March 2014 to secede from the unilingual state of Ukraine and rejoin the Russian Federation constitutes an “annexation” by Russia. Nor are we convinced that the government of the United States intends to ease its threatening posture and actions (including economic sanctions) against Russia, as some interpret the May 12 meeting in Sochi, Russia between U.S. Secretary of State John Kerry and Russian President Vladimir Putin. On the latter, watch for more news and opinion  on our website. 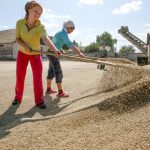 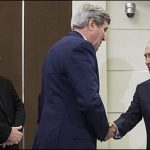 Kerry’s Sochi visit: Not yet a new resetBackground, Russia