As Israel’s Netanyahu uses coronavirus to consolidate power, his chief rival caves in 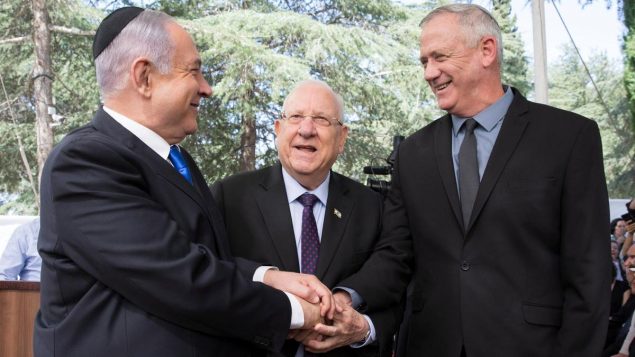 In a blow to opposition parties, Benny Gantz has broken his promises and made a deal to join Benjamin Netanyahu’s “emergency government”

Two weeks ago, Mr Gantz won a thin majority in parliament, giving him first right to form a coalition government. Now he has conceded to Mr Netanyahu, who will remain in power for the next 18 months.

Over the past year, Mr Gantz fought three hotly contested – but indecisive – elections to end the Prime Minister’s 11-year rule. He had promised supporters he would never sit in government alongside Mr Netanyanhu, who is due to stand trial for corruption.

Predictably, Mr Gantz’s U-turn tore apart his Blue and White alliance; two of its three constituent parties will now join the opposition. Governmental paralysis has increased in the past year, with neither Mr Gantz nor Mr Netanyahu able to cobble together a majority coalition with other parties.

The reason was the Joint List party, representing Israel’s Palestinian Arab citizens – a fifth of the country’s population – which held the balance of votes. None of the main Jewish parties wanted to be seen relying on its 15 seats.

Mr Netanyahu’s “emergency government” should now occupy more than 70 seats in the 120-member parliament – a safe majority. Renowned for his ability to pull off political miracles, Mr Netanyahu gradually wore down his rival’s resistance over the past year. Coronavirus proved to be the final straw.

The Prime Minister has exploited justifiable fears about the virus to cement his status as a kind of ‘Father of the Nation’. In regular addresses, he has presented himself as an Israeli Winston Churchill, the British wartime leader who helped to vanquish the Nazis. He has now served longer as prime minister than Israel’s founding father, David Ben Gurion.

Mr Gantz, it seems, assessed that there was no practical way to hold a fourth election, given the lockdowns. And in any case, Mr Netanyahu, who completely dominates the airwaves, would have cast him as recklessly endangering Israel’s health and security by refusing to join him in government. Mr Gantz also may have blanched at the prospect of another no-holds-barred election campaign that would unleash more of the dirty tricks at which Mr Netanyahu and his allies excel.

As Mr Netanyahu has grown more desperate to stay in power – and fearful of being put on trial – the gloves have come off. In the last two elections, his officials have questioned Mr Gantz’s mental health and spread unverifiable rumours that a phone stolen from him contained compromising photos.

Further, because his path to power depended upon backing from the Joint List, Mr Gantz was the subject of endless smears from Mr Netanyahu, accusing him of getting into bed with “supporters of terrorism”.

Mr Netanyahu’s other strategy has been to undermine the judiciary and the Parliament – the two main checks on the executive he controls. Amir Ohana, his justice minister, has partially shut down the courts, which postpones Mr Netanayhu’s March 17 trial until the end of May. It may be delayed even further.

To deal with the resulting logjam of hearings, the cabinet passed emergency regulations last week to run court cases over video instead. But it exempted those facing indictment, including Mr Netanyahu.

The Prime Minister has also allowed his senior officials to unleash a torrent of incitement against Israel’s Supreme Court, in an effort to intimidate judges and turn the public mood against the legal system. Yuli Edelstein, the speaker of the parliament from Mr Netanyahu’s Likud party, suspended the legislature on March 18 and refused to hold a vote for his successor because Mr Gantz’s bloc had a narrow majority.

The fear was that a new speaker would help pass legislation to prohibit criminal suspects under indictment from serving as prime minister, ousting Mr Netanyahu from power. The Supreme Court ruled that Mr Edelstein had committed “an unprecedented violation of the rule of law”, demanding that he allow the vote to go ahead. Rather than carry out the ruling, Mr Edelstein resigned.

Mr Netanyahu’s closest allies, including the justice minister, rounded on the judges. Yariv Levin, the tourism minister, accused the chief justice, Esther Hayut, of launching a judicial “coup”. As veteran Israeli analyst Ben Caspit observed: “The coronavirus outbreak allows Netanyahu to keep undermining the rule of law for his own survival, almost unchallenged.”

Defending his decision to join the government, Mr Gantz said: “These are not normal times and they call for unusual decisions.” He hopes to persuade his supporters that he has not capitulated completely. If things go to plan – a big ‘if’ – Mr Gantz should become the prime minister in 18 months’ time.

In the meantime, Mr Gantz will likely serve as foreign minister – where he may help to burnish, as a supposed “moderate”, Israel’s “democratic” credentials abroad. It may not be easy. This year, Israel scored record lows in global democracy surveys. Freedom House noted that it suffered “an unusually large decline for an established democracy” even before the latest events, partly due to Mr Netanyahu’s “anti-democratic tendencies”.

Israel’s president, Reuven Rivlin, from Mr Netanyahu’s own party, has similarly warned that the country’s democratic institutions are under threat. Convoys of cars have defied lockdowns to protest Mr Netanyahu’s flouting of norms.

The test now for the emergency government will be whether Mr Gantz’s inclusion stays the demonstrators’ hand for the time being or inflames yet more protests.