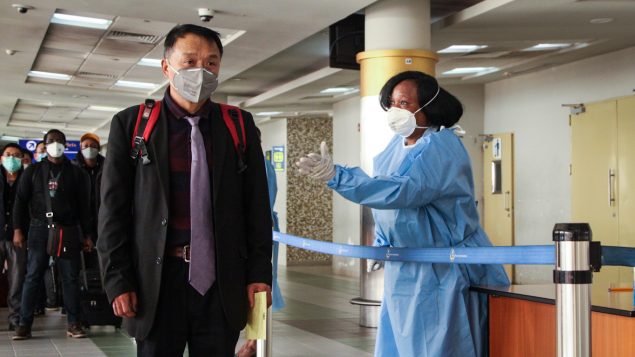 Passengers arriving from a China Southern Airlines flight from Changsha in China are screened for the new type of coronavirus, whose symptoms are similar to the cold or flu and many other illnesses, upon their arrival at the Jomo Kenyatta international airport in Nairobi, Kenya Wednesday, Jan. 29, 2020. Some countries began evacuating their citizens Wednesday from Wuhan, the Chinese city hardest-hit by an outbreak of the new virus that is thought to have killed over one hundred people and infected more than 6,000. (AP Photo/Patrick Ngugi)

Similar to how Ebola was racialized as a distinctly African illness, news of the coronavirus has led to an outbreak of anti-Chinese sentiment across the West.

Facing the worldwide spread of the coronavirus, the World Health Organization declared a global emergency yesterday in response to the outbreak. Up from just 548 on January 22, there are, as of Friday afternoon, 9,600 confirmed cases of the disease, and 213 people have already died, all of them Chinese. The majority of the infections and more than 95 percent of the deaths have occurred in the central province of Hubei, particularly in the city of Wuhan, one of China’s largest cities and a major transport hub. The World Health Organization has praised Chinese authorities for the speedy and comprehensive measures taken to combat the virus, including their transparency and their willingness to cooperate with the international community.

Nevertheless, the virus has already traveled around the world, with confirmed cases in North America, Australia and many European and Asian countries. And as the virus has spread, so has anti-Chinese sentiment. Similar to how Ebola was racialized as a distinctly African illness, news of the coronavirus has led to an outbreak of anti-Chinese sentiment across the West. Across Europe and Asia, there are reports of Chinese people being refused service in restaurants. In Canada, Chinese children claim to be being bullied at school. Meanwhile, in Paris, a video of an Asian woman on a train surrounded by white people covering their faces in fear went viral.

Many of the fears being stoked are based upon old stereotypes of the Yellow Peril – a racist belief that East Asians were flooding Western countries with disease. Yellow Peril has plagued immigrant communities in the U.S. since the earliest waves of Chinese immigration in the nineteenth century. One French newspaper printed the headline “Yellow Alert!” on its front page, suggesting the country was facing a “new yellow peril.” As two thirds of the first people carrying the virus had visited a live animal market in Wuhan, one hypothesis is that it was passed to humans through animal contact, possibly through bats. This has fed into stereotypes that Chinese people have poor hygiene standards and will eat anything. One video online of a young Chinese woman eating bat soup led to a deluge of hate online (including from media) claiming that the practice was revolting and blaming her for the outbreak. Conservative commentator Paul Joseph Watson even invented imaginary progressives that were forcing him to eat the bat or face being called bigoted. Few seemed to care that the video was over three years old and was actually shot in Palau, a country thousands of miles from China.

Rhea Liang, a doctor in Queensland, Australia, revealed that her patients talked about refusing to shake her hand because of the coronavirus. Dr. Liang is actually from New Zealand and has not left Australia since the outbreak. “This is racism,” she concluded. Meanwhile, after the TV personality shared a picture of himself with Korean pop band B.T.S., one user’s comment that “James Corden dies of the coronavirus” garnered 25 thousand likes on Twitter. Thus, it appears to have taken very little for negative resentment towards Chinese people to bubble to the surface. As one user said in a well-publicized tweet, “Because of some folks in China who eat weird shit like bats, rats, and snakes, the entire world is about to suffer a plague.”

But if Americans are worried about potential outbreaks of disease, they need not look as far afield as China. A poll published yesterday revealed that over 40 percent of the country does not always wash their hands after using the bathroom. Meanwhile, a new report released last week found that dozens of major cities’ drinking water, including Washington, D.C., Philadelphia, New Orleans and Miami, have been found to contain toxic, cancer causing chemicals. The report did not garner similar publicity to the coronavirus. American meat is also well known to have serious hygiene issues, with reports finding that meat is riddled with fecal matter. One serious fear in Britain is that Brexit will lead to the country being flooded with dangerous American meat that was previously banned under E.U. regulation.

According to the latest Pew Research Center poll, only a quarter of Americans see China positively, with nearly two-thirds holding openly negative opinions about the country, with similar results found across the West. The latest news, complete with the wave of xenophobia, is unlikely to improve the situation. 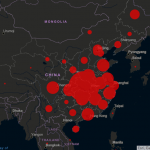 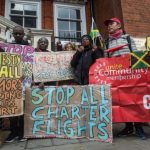