Argentinean President who Generated Hunger and Misery for Most Has Died 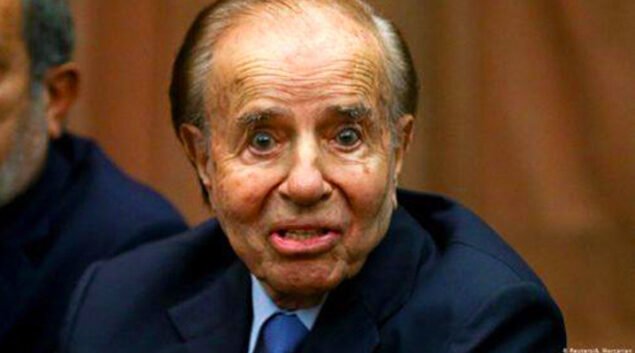 Menem is dead, he leaves behind a monument to neoliberalism, frivolity and was responsible for the political skepticism of several generations.

Menem is dead, he leaves behind a monument to neoliberalism, frivolity and was responsible for the political skepticism of several generations.

Former president Carlos Saúl Menem died on Sunday at the clinic Los Arcos in the city of Buenos Aires, where he had been hospitalized for months with a urinary tract infection. His two presidential mandates will be remembered in history as those that democratically established neoliberalism in the country and for having been the only president to be imprisoned for illegal arms trafficking to Croatia and Ecuador, even if it was just five months of house arrest in a country house. The Casa Rosada will define how the official mourning that corresponds to a former president will be carried out.

Menem died in office. He was one of the senators who, from his Frente Justicialista Riojano, was part of the national ruling party, the Frente de Todos. His last political intervention was through his daughter Zulema Yoma, who said she was going to try to get her father to vote against the legalization of abortion in December. It was not possible because his health condition worsened.

Menem privatized water, gas and electricity services, communications, blast furnaces and steel, the railways, Aerolíneas and the state oil company YPF. He also set up the private pension system, the so-called AFJP, which left millions of pensioners outside the pension system.

At the same time, the Peronist senator granted amnesty to the dictatorship’s leaders who had been convicted of crimes against humanity.

He called in Domingo Cavallo, who accelerated the process of bankruptcies in small and medium-sized industry and melted down rural producers. He privatized pensions and created the AFJP scam with millions of citizens to be left without pensions in the future.

He was a willing participant in the illegal arms trafficking to the civil war in the former Yugoslavia, and to Ecuador in the midst of the war with Peru – when Argentina was a guarantor of peace in the conflict – are added to the terrorist attacks against the Israeli embassy and against the AMIA building during his government, which hindered the investigation.

He was the only former president since 1983 to serve time in prison for the illegal arms trafficking case. His sentence only lasted 167 days as he was accompanied by his wife at the time, Cecilia Bolocco, and comfortably installed in the country house of his friend Armando Gostanián, in Don Torcuato, for allegedly being the head of an illicit association, in mid-2001.

Under his super minister Domingo Cavallo, he instituted a forced exchange rate that pegged the peso to the dollar, which led to massive deindustrialization, factory closures, and a flood of foreign products.

When he tried to return to the presidency in 2003, he won in the first round, but in the second round he withdrew when he saw that the Patagonian Néstor Kirchner was going to be the winner.