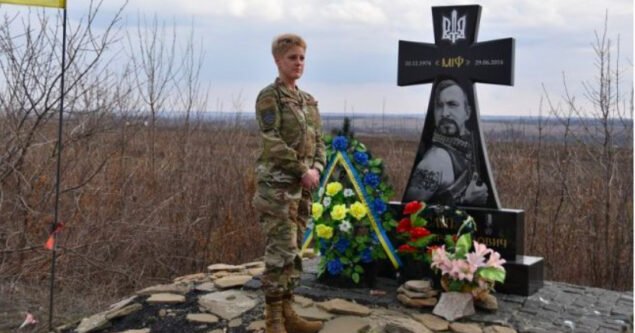 Colonel Brittany Stewart in the Donbass. Illustration by mil.gov.ua.

Written exclusively for the New Cold War website, this month our regular contributor Dmitriy Kovalevich examines the increasingly paradoxical situation in Ukraine over the past month.

Throughout the month of April, Ukraine’s top politicians and mainstream media have whipped up military hysteria, frightening the population with a possible Russian military invasion. The paradox of the situation is that Kiev has been talking about the ‘Russian invasion of Donbass’ for seven years, and the region is now officially being referred to as “occupied by the Russian army.”

With a sinking heart, on April 21 the Ukrainian authorities were awaiting a message from the Russian president, fearing that he might announce the recognition of the Donbass republics. In parallel, the Russian army was deployed close to the borders of Ukraine, during the Russian military exercises. When on April 23, the Minister of Defense of the Russian Federation announced the completion of the exercises and the return of troops to their permanent locations, the Ukrainian authorities breathed a sigh of relief and the shelling of Donbass resumed again.

War hysteria in the media

While western media cry over the Russian build up near Ukraine’s border, they always ignore the fact that Ukraine’s army has been amassing next to the Donbass frontline since March.

The withdrawal of Russian troops after the exercises was presented in the Ukrainian media as a personal victory by President Zelensky, who allegedly scared the Russians. However, the war hysteria was present exclusively in the media. In reality, having visited some regions in April, I did not notice any changes in people’s mood, no panic or fear, despite barraging helicopters and aircrafts throughout Ukraine. The fact is that a significant part of the population of Ukraine is absolutely not afraid of a possible invasion by Russia, and they would even be welcome them, while the rest of the Ukrainians are tired of the constant crying of “Wolf!” for the past seven years.

It is noteworthy that at the beginning of April, Ukrainian troops cleared the land mines from the approaches to the positions of Donbass rebels, but after the start of the Russian exercises, they began to mine them again, and after the end of exercises they again cleared mines, clearing the corridors for an offensive against Donbass republics. These moves only caused several fatal accidents.

At the end of April, the President of Ukraine announced plans to withdraw from the Minsk Agreements. And this fact may imply the actual start of a full-scale war.

In an interview with The Financial Times, Zelensky said that the Minsk agreements should be changed as soon as possible. “There are two options: we can change the Minsk format, adjust it. Or we can use some other format,” he said [1].

Moreover, according to him, the United States, UK or Canada should be involved in the negotiation process. That is, in addition to Germany, Russia and France, which insist on the observance of peace agreements, a certain version of the “British Empire” should be involved, but without the participation of the opposite side to the conflict (DPR and LPR).

German Foreign Minister Heiko Maas said during the Atlantic Talks [2] on April 26 that the task of resolving the conflict in Donbass is to return to the implementation of the Minsk agreements. Otherwise, in his opinion, this conflict will be frozen, which Europe does not wish to allow.

Earlier, on April 19, a three-hour negotiation between the advisers of the leaders of the Normandy Four countries took place, but it was not fruitful [3]. The Ukrainian delegation refused to discuss Russia’s proposals to prevent “escalation of firefights” and to bring to justice those responsible for violating the ceasefire. However, despite the actual disruption, which has become the traditional outcome of each such meeting, the negotiations will continue.

Russia claims that the change in the Minsk agreements is a de facto rejection of them. “We have repeatedly said that this is a very difficult situation. This is once again at the highest level, probably a demonstration that Ukraine would like to modify the Minsk process. And it is simply impossible to modify it without putting an end to it,” [4] said Putin’s spokesperson, Dmitriy Peskov on April 26th.

After that, the heads of the self-proclaimed Donbass republics Denis Pushilin and Leonid Pasechnik recorded video messages in which they confirmed their readiness to talk with Zelensky on the line of confrontation. Zelensky, in turn, said that he was not going to “talk to terrorists” and in his place “it is simply impossible” [5].

The main points of the Minsk agreements, which Ukraine has refused to comply with in recent years, entail the granting of some autonomy to the seceded territories of Donbass, with the right to elect their own local authorities, as well as full amnesty to all parties of the conflict. Such a result is thought to restrict the ethnic nationalism policy, which actually caused the conflict.

On Tuesday, April 27, President Zelensky once again stated that the Ukrainian army must be ready to “reach our borders,” [6] which implies an attack on Donbass or Crimea.

Meanwhile, the trench warfare continues, and every day people are killed by shelling or mine explosions. The main instigators are often the armed formations of Ukrainian neo-Nazis, existing and fighting extra legally.

Amidst April aggravation in the Donbass, the “The New York Times” published a material that tells how members of the far-right organization “Right Sector”, in violation of the Minsk agreements, conduct mortar attacks [7].

Judging by the words of a “Right Sector” militant, Dmytro Kotsyubailo, they opened fire first. On January 18, the same neofascist militant posted a photo with a mortar on Facebook [8] indicating that they were to be the first to use weapons.

When the right is in the wrong

“Use weapons first, conduct aggressive tactics and begin to recapture our own territories again. Step by step. To victory”, wrote the Right Sector militant.

Furthermore, in the “Right Sector” they said that in Avdiivka [the frontline of Donbass war] their unit maintains the fighting spirit in a curious way – keeping a live wolf in a cage near the commandant’s office. Dmitry Kotsyubailo “joked” that the wolf is being fed “with the bones of Russian-speaking children”, as NYT reported.

The actions of the Ukrainian neo-fascists and their paramilitary units are openly supported by representatives of the British military. In April, the US Defense Attaché Brittany Stewart visited the front line and saluted to the grave of a Ukrainian Right Sector militant Vasil Slipak [9]. On the uniform of the British military attaché there was the patch of the Ukrainian Nazis and anti-Semites with a skull and the inscription “Ukraine or death” [10].

The Russian Foreign Ministry spokesperson, Maria Zakharova, said that in this case it can be seen that the NATO military is openly supporting the neo-Nazis. “This is how the American, Canadian and other NATO militaries build relationships with Ukrainian radicals and neo-Nazis, carriers of the traditions of Nazi collaborationists, accomplices of the Holocaust,” Zakharova said in her Facebook post. Nothing new has emerged in NATO’s tactics, she said. “After 1945, the Nazis and their accomplices were recruited en masse by the CIA. Now they have come to Ukraine for new reinforcements,” Zakharova concluded [11].

And,  as if to confirm these words, in the center of Kiev on April 28, a march is being held in honor of the SS division ‘Galizien’ [12], known for its participation in the Holocaust and atrocities against the civilian population of Ukraine, Belarus, Yugoslavia and France. The Nazi march is sponsored by Kiev city administration.

In April, the US Senate Foreign Affairs Committee passed the Ukraine Security Partnership Act, which would increase annual security assistance to Ukraine to $ 300 million [13]. Kiev will also receive lethal weapons from the United States.

Child dies as a direct result of NATO support

And this is how it works. In early April, a 5-year-old boy Vadik Dmitriev was killed in the courtyard of his house by a blast from a Ukrainian drone, adding to the list of children who are victims of this war. His death was confirmed by the OSCE mission [14]: “On April 2 in the Donetsk region, a child died due to blast trauma and shrapnel wounds in non-government-controlled Oleksandrivske.”

A Finland-based journalist Oksana Chelysheva connected with the mother of the murdered child, Ekaterina Dmitrieva: “They killed my son, took away the meaning of my life. But they do not understand this pain, because their children are at home and happy. And I live only with the belief that the guilty will be punished. And when for a minute I think that this situation may remain suspended, that children will continue to die, my blood boils. Our children did not start a war. They are not to blame. Our children want to live. And if after the death of my son nothing will change, that is, the likelihood of the death of other children… They should get off their backsides, they should begin to move, and begin to protect our children. My son was an angel. He was so affectionate and gentle. He kissed me; he was my support. He was developed beyond his years. He loved animals and children very much. He was a miracle. I raised him in love, taught him to be kind and sensitive to people”, said the mother [15].

The death of this child is also a direct consequence of the supply of lethal weapons to our civil conflict and the support of armed neo-Nazi formations by NATO countries.