BUCHAREST, Romania (AP) — Nine more people died with burn-related injuries on Saturday, just over a week after a fire broke out in a Bucharest nightclub, authorities said, bringing the death toll in the tragedy to 41. One hundred and nine other people remain hospitalized, 48 of them in serious or critical condition. 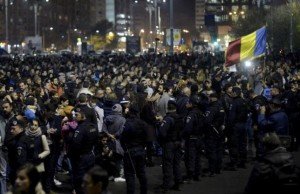 Many in Romania have blamed lax government safety standards for the deadly blaze. Prime Minister Victor Ponta and his Cabinet resigned Wednesday after mass protests.

The district mayor where the nightclub is located was arrested, along with two town hall employees, for giving out a permit without it being authorized by firefighters, the anti-corruption prosecutors’ office said Saturday. Mayor Cristian Popescu Piedone resigned on Wednesday, saying he was morally guilty for the fire.

Multiple hospitals reported deaths Saturday from the Oct. 30 blaze, which erupted at the Colectiv basement nightclub during a heavy metal concert when a spark from a pyrotechnic show ignited foam decor. Panicked people fled for the sole exit in a stampede, leaving 180 injured. 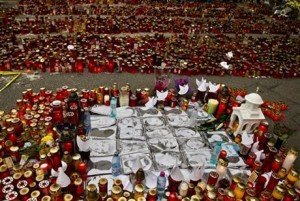 Adrian Stanculea, spokesman for the state burns hospital, said three men died at that facility, while the manager at University Hospital, Catalin Cirstoiu, said a man there died of his injuries.

The ninth person to die Saturday was a woman who had been in a critical state since the fire. She died at the Bagdasar-Arseni hospital said hospital spokesman, Andrei Carantino.

Campeanu said earlier Saturday that 109 other people still remained hospitalized, 48 of them in serious or critical condition.

Late Saturday, a couple of thousand protesters gathered in Bucharest for the fifth consecutive evening, waving Romanian flags and calling for better governance and an end to corruption.

“The political class is inefficient and corrupt. We need a government of technocrats or experts,” said protester Cristina Lotrea, a 22-year-old sociology researcher.

BUCHAREST, Romania (AP) – A nightclub fire in Bucharest that killed at least 44 people became the tipping point for many Romanians who have long been frustrated with corruption among leaders. But as the government resigned amid street protests this week, many remained skeptical that the leaderless street movement will succeed in doing away with the old order.

The large protests followed the Oct. 30 nightclub fire, which many Romanians blame on a weak enforcement of regulations and corruption. They continued even after Prime Minister Victor Ponta resigned on Wednesday, underlining deep social dissatisfaction with an often corrupt political order that has ruled the country since the transition from communist dictatorship to democracy a quarter century ago.

Political analyst Cristian Parvulescu said the nightclub fire proved to be “the last straw” because of a widespread feeling “that any of us could have been there.”

“People feel the need for change, for new faces. We have had the same faces for 25 years and this has led to this revolt as there is a real lack of competition,” said Parvulescu, who is the dean of the National School of Political Studies and Public Administration in Bucharest.

Hard-charging anti-corruption prosecutors led by Laura Codruta Kovesi have stepped up an anti-corruption drive in the past couple of years securing a record 1,051 convictions in 2014, up from 743 the year before with even more are expected this year. Among those convicted since January 2014 are a former prime minister, seven former ministers, a former deputy prime minister, four lawmakers, one European Parliament lawmaker, 39 mayors, 25 magistrates and two business tycoons.

All the major parties in Romania’s Parliament have been touched by the corruption probes and convictions – from the ruling Social Democratic Party and its junior partner, the National Union for the Progress of Romania to the opposition Liberal Party – leading to a belief that politicians enter politics to enrich themselves. But with many lawmakers critical of the anti-corruption drive, solutions are not clear-cut and the old guard is unlikely to easily surrender its power and way of doing politics.

“It is so fluid at the moment, the old guard is so entrenched and the protesters are not a single group who know what they want the future to look like other than that they want the current system gone,” Daniel Brett, a Romania expert and associated professor at the Open University said in an interview with The Associated Press. “At the moment everyone wants rid of the old system, but no one knows what to replace it with, or how to replace it.”

In addition to the corruption, the protesters – who have taken to the streets of the capital and other cities for the past five days – have also condemned the nation’s politicians for being arrogant and isolated from the problems of ordinary people.

On Saturday evening, a couple of thousand people jammed University square, a traditional site for anti-government protest in Romania.

“We want change from the people who lead us, for them to respect us, for there to be less corruption,” said Octavian Rachita, a 30-year-old graphic designer who has been protesting for the past five days. He held a banner saying: “We have to be the change we want to see.”

“What happened was due to corruption. We need a better medical and education system and a press that does not distort events,” she said.

The protests seem to have taken leaders off guard.

It was “a shock for politicians. They didn’t expect it,” Parvulescu said. “These protests are about the democratization of Romania. People want more democracy. Our democracy is a facade, it is window dressing.”

Protesters have also directed their anger at the rich and powerful Romanian Orthodox Church, accusing it of failing to respond to the outpouring of national grief after the fire. Pressure had already been mounting for the state to curb the financial privileges of the church.

“We want hospitals, not cathedrals!” was one of the chants that protesters shouted this past week.

Protests have been cyclical in Romania, starting with the 1989 anti-communist revolt in which former dictator Nicolae Ceausescu was ousted and executed and more than 1,300 died.

Ponta came to power in May 2012 a couple of months after major street protests, promising change, but has since angered Romanians by reneging on promises for reform. He refused to step down when he was accused in June 2012 of plagiarizing his 2003 doctoral thesis, and again refused calls to resign when prosecutors announced in June 2015 they were probing him for tax evasion, money laundering and conflict of interest connected to work he did as a lawyer between 2007 and 2008. He denies wrongdoing.

Prosecutors have also been investigating Ponta’s former finance minister, Darius Valcov, who is charged with taking 2 million euros ($2.1 million) in bribes when he was a mayor. Prosecutors say Valcov, who resigned in March 2015, had hidden works by Picasso and Renoir, and 3 kilograms (6.6 pounds) of gold, in a friend’s safe.

President Klaus Iohannis, a local mayor and ethnic German who surprisingly defeated Ponta in November 2014 presidential elections, also came to power on the back of a spontaneous revolt. That protest movement was sparked after expatriate Romanians rallied in European capitals and farther afield to protest rules making it hard for them to vote in national elections.

He has been a key player this week, announcing an interim prime minister and meeting with civic groups on Friday for consultations on the social changes there are seeking. 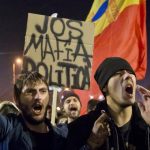 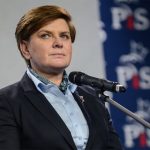