Tens of thousands of people have joined a new round of demonstrations in cities across Poland to protest against the new government’s attempts to take control of the country’s Constitutional Court. 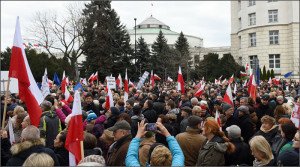 Another day of large rallies across Poland on Dec 19, 2015, protesting attacks on democracy and constitution (Janek Skarzynski, AFP)

The rallies against the actions of the month-old government formed by the ruling Law and Justice party were staged today in more than 20 cities in different regions of Poland as well as in several cities abroad, including London, Brussels, Berlin and Tokyo, according to rally organizers.

A protest in front of the parliament building in the Polish capital of Warsaw was attended by about 20,000 Poles, Reuters reported, citing city officials. The protesters were waving Polish and EU flags and chanting “Stop destroying democracy!” and, “We will defend democracy, constitution and Constitutional Court!”

The demonstrators were also carrying banners and placards that read “no to the dictatorship!” and “hands off Constitutional Court!”

The rally was organized by the Committee for the Defense of Democracy movement (KOD) via social networks and was supported by all major opposition parties with some politicians, including a former Polish foreign minister, Radoslaw Sikorski,who attended the demonstration. Many activists from Poland’s Solidarity movement, which opposed the country’s Soviet regime in the 1980s also joined the protest.

“We have our freedoms and we will fight in order to protect them,” the founder of the KOD movement, Mateusz Kijowski, said as quoted by Germany’s Tagesspiegel newspaper.

However, the demonstration was disbanded early and lasted only two hours because of an anonymous bomb threat that later turned out to be a hoax.

Protests were also staged in the cities of Poznan and Gdansk, which were attended by 4,000 Poles each, as well as in the eastern Polish city of Lublin, where about 1,000 took to the streets, German media reported.

The wave of public outrage was provoked by a bill proposed by the new government that requires a two-thirds majority in the 15-judge Constitutional Court for any of its rulings to be valid. The critics of the ruling party claim such legislation, which is due to be passed on Monday, would paralyze the work of the judicial body, as such a majority could hardly ever be reached in the case of contentious issues.

After Poland’s parliamentary elections, which were held in October, the current ruling Law and Justice party gained a majority in both houses of parliament, with Polish President Andrzej Duda also a supporter of the new government.

In this situation, the government’s attempts to take control over the Constitutional Court are regarded by the opposition as efforts to undermine the checks and balances system and violate democratic norms.

Last Saturday, more than 50,000 Poles staged a mass rally in Warsaw, with smaller demonstrations being held in other Polish cities as people protested against the government’s decision to replace five out of 15 judges on the Constitutional Court. [WEblink to news report below.] At the time, the opposition accused the government of seeking to gain control over the judicial body by installing loyal judges and denounced it as a violation of the constitution.

The euroskeptic conservative government denies all accusations and claims that it needs to gain control over the country’s institutions so that Poland can strengthen and equalize its social system and economy, and can increase its voice abroad. It also is not planning to change its policy because of the protests so far.

Tens of thousands marched in Poland on Dec 12 against threats to democracy, constitution, Reuters report on New Cold War.org, Dec 12, 2015 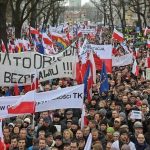 Tens of thousands marched in Poland on Dec 12 against threats to democracy, constitutionEurope - East 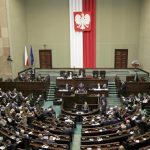