For the second time in one week, published results of a major survey of the Crimean people show they are content with the decision one year ago to break from Ukraine.

The latest survey provides even more detail than the survey published by the German firm GfK on Feb. 4, 2015 (in Russian), including the astonishing fact that nearly 90 per cent of ethnic Ukrainians in Crimea who were polled support the break. Results from the GfK survey, which was conducted in January 2014, were published in English on March 1, 2015.

This latest survey was commissioned by John O’Loughlin, College Professor of Distinction and Professor of Geography at the University of Colorado in Boulder, and Gerard Toal (Gearóid Ó Tuathail), Professor of Government and International Affairs at Virginia Tech’s National Capital Region campus. It was conducted in December 2014. Results are published in Open Democracy on March 3, 2015 and they show widespread support for Crimea’s decision to secede from Ukraine and join the Russian Federation one year ago.

The authors hold the view that Crimea’s secession was “an illegal act under international law”. See the comments section of their article for contrary opinions to that.

While stating that view, the authors also write, “It is also an act that enjoys the widespread support of the peninsula’s inhabitants, with the important exception of its Crimean Tatar population.”

Concerning the Tatar “exception” which the authors claim, their survey actually shows the opposite. The survey asks for opinion of the “decision of Crimean authorities to join Russia”. Approximately 30 per cent of Tatar respondents say it was “wrong”, while an equal number say it was “generally right” and another 20 per cent say it was “absolutely right”. The final 20 per cent “don’t know” or refused to answer.

Another result that will confound those who have only read propaganda stories about Crimea is that nearly 90 per cent of ethnic Ukrainians in Crimea who were polled support the break!

Results from another recent survey, which was conducted in January 2014, were published on March 1, 2015 by the German polling firm Gfk. 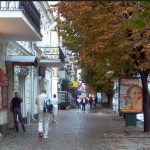 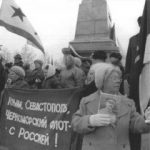 (Not so) Brief history of CrimeaBackground, Crimea