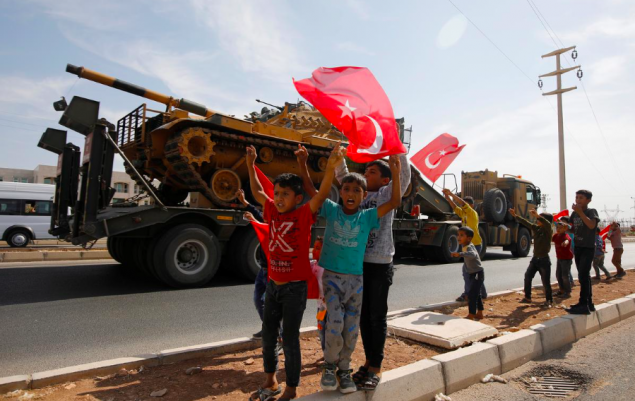 The Turkish assault on northeastern Syria is called Operation Peace Spring. Although Turkish propagandists did not invent newspeak, the language of Oceania in George Orwell’s novel 1984, the symbolism of labelling a war “peace” is gross. Even the internal Turkish propaganda machine does not believe it, as it has ordered the 90,000 mosques in the country to recite the Koran’s Conquest Surah!

The Turkish assault on northeastern Syria is called Operation Peace Spring. Although Turkish propagandists did not invent newspeak, the language of Oceania in George Orwell’s novel 1984, the symbolism of labelling a war “peace” is gross.

Even the internal Turkish propaganda machine does not believe it, as it has ordered the 90,000 mosques in the country to recite the Koran’s Conquest Surah!

The Turkish Armed Forces began an open military assault on Wednesday against an enemy described as terrorists. The Turkish propaganda machine is putting the Syrian Democratic Forces in the same basket as the executioners of the Islamic State (ISIS) that they fought. No one with any knowledge of terrorism believes the Syrian Kurds are equivalent to ISIS. On the contrary, the Syrian Kurds are the ones who actually fought ISIS, and not Turkey as it pretends.

Turkey indeed appears in all intelligence reports as the main sponsor of ISIS, particularly between 2014 and 2016. Turkey’s Syrian proxies in the ongoing assault are no other than ex-ISIS, or related jihadist killers.

Former U.S. special envoy to the coalition against ISIS Brett McGurk confirms what is an open secret:

“Tel Abyad, a Syrian border town, was the main supply route for ISIS from 6/14-6/15 when weapons, explosives, and fighters flowed freely from Turkey to Raqqa and into Iraq. Turkey refused repeated and detailed requests to seal its side of the border with U.S. help and assistance.

“Turkey also during this period refused to permit the U.S. military to fly from Incirlik airbase to strike ISIS positions even as ISIS fighters poured into Syria from Turkey. General Allen and I spent much of that year in Ankara as ISIS threats to NATO allies in Europe grew urgent.

“In June 2015, after no action from Turkey and the border still wide open, we enabled SDF fighters to clear Tel Abyad. After the battle, Turkey sealed the border (from the SDF not ISIS) and built a wall. Reports this morning are that Turkey removed its own wall to move its forces.

“Despite that experience, the U.S. continued to focus on Turkey as an ally with detailed plans for cooperation to clear ISIS from other areas. After the loss of Tel Abyad, ISIS organised its foreign fighters in the town of Manbij and continued planning major attacks in Europe.

“For more than six months, we worked with Turkey and opposition groups it approved to move from its areas west-to-east to seize Manbij. These fighters received more support than the SDF — but they could not advance & some gave U.S.-provided equipment to al Qaeda groups in NW Syria.

“After the Paris attacks and with threats growing, we enabled the SDF over Turkey’s objection to seize Manbij in a costly multi-month battle. Since then, there were no further directed attacks into Europe. It also led to an information haul enabling us to decimate ISIS leadership.

“It is doubtful that Trump knows any of this history as he touts the success of defeating the caliphate (which could not have happened absent the Tel Abyad and Manbij operations) and this week ordered U.S. forces to suddenly abandon posts near Tel Abyad.

“The consequences of the coming attack will be serious. ISIS is surely preparing to reconstitute in the maelstrom. The United States has and was bending over backwards to address all security concerns for Turkey. There was no imminent threat. This has nothing to do with Turkey’s security. It’s part of a plan to extend Turkey’s border 30km into Syria. Erdoğan has been transparent about this.”

It is crystal clear. It shows who is helping and who is fighting ISIS.

Turkey has lost the battle of truth regarding its charges of terrorism against the Syrian Kurds and their Arab, Christian, Yazidi and Turkmen allies. The international community, though it still talks about Turkey’s legitimate security concerns, knows very well there has never been a verifiable threat to Turkey originating from Syrian Kurdistan. Ironically, the Turkish Army and its proxies are in Syria to finish the ethnic cleansing ISIS failed to accomplish in 2014-15, when they were repulsed by the Kurds. The international understanding of Turkey’s real objective is strongly reflected in the across-the-board international calls to halt the military assault.

Erdoğan’s fury on Thursday at everyone who does not think and talk his way about the army’s action in Syria speaks volumes. The communication disaster is such that he lost control and openly threatened to unleash 3.6 million Syrians on Europe if the Europeans continued to call his pitiful “Peace Spring” an invasion.

Turkey also continues to abuse its leverage with NATO, which fears losing the country to Russia’s sphere of influence. Its weak Secretary General Jens Stoltenberg appears to be the only Western official to understand Ankara’s point of view and childishly asks Turkey to act with restraint.

On the international law front, Turkey invokes time and again its right to self-defence as enshrined in Article 51 of the UN Charter.

The problem is that Turkey, like other aggressor countries, does not feel obliged to present proof of the threats that trigger its right to self-defence. The Syria invasion is typical of such behaviour. Today Article 51 has become a fig leaf for rogue states to invade their neighbours.

The Turkish assault is a blatant illustration of the failure of the appeasement policy practiced by the West.

Alas, the more the West appeases, the more Turkey abuses, and the more problems arise. The NATO partnership is getting shakier by the day and refugees are now a disgraceful bargaining chip for Erdoğan.

Although superior, the Turkish Army will have a hard time holding the foreign territory it conquers. It will face a highly determined and skilled Kurdish army. As for the idea of forcibly relocating Syrian Arab refugees in the conquered lands to create a 21st century security belt with the financing of the West (around $50 billion), better throw it in the bin of foolish projects.

All in all, nothing positive will come out of Ankara’s military arrogance, neither domestically, nor externally, only more destruction, instability, grief and chaos, inside and outside Turkey. 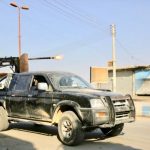