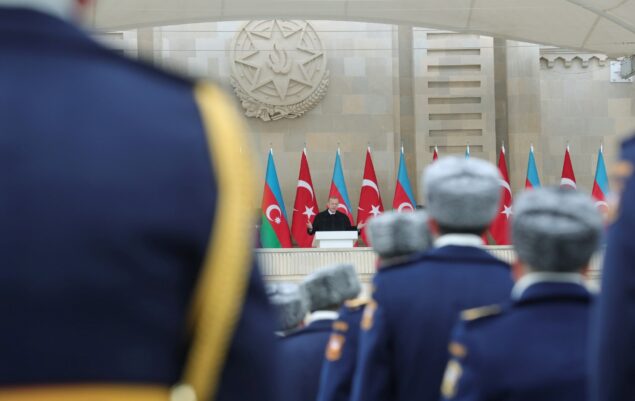 Turkish President Recep Tayyip Erdogan makes a speech during a military parade to mark the victory on Nagorno-Karabakh conflict, in Baku (Reuters)

“Washington regards the region as a springboard for ousting Russia from the Caucasus-Caspian region and preventing Iran from strengthening its positions. The importance of the South Caucasus in US foreign policy is also due to the hydrocarbon resources of this region and their transportation to Europe.”

The Russian newspaper Izvestia, while mentioning Acting Assistant Secretary of State for European and Eurasian Affairs Philip Reeker’s ongoing trip to the three nations of the South Caucasus – Armenia, Azerbaijan and Georgia – quoted comments made to it by Vladimir Avatkov regarding American designs on the region.

Avatkov’s is a voice to heed, as he is a Senior Lecturer at the Diplomatic Academy of the Ministry of Foreign Affairs of the Russian Federation and an expert on Turkish and Turkic affairs. Izvestia also identifies him as a senior researcher at the Institute of World Economy and International Relations (which is evidently now the Center for International Security of the Primakov National Research Institute of World Economy and International Relations, named after the late Russian prime minister and foreign minister Yevgeny Primakov.)

In comments as concise as they are incisive, he characterized the U.S’s and NATO’s strategy toward the Caucasus – always but now more than ever a critically-vital geopolitical crossroads – as follows:

“Taking into account the active expansion of NATO to the east and attempts to form an image of an enemy out of Russia, the United States is pursuing an active policy towards Ukraine and the South Caucasus….The US strives to tear Transcaucasia away from Russia with Ankara’s hands. First of all, we’re talking about Azerbaijan and Georgia, but this can happen with Armenia, depending on how the elections are held there.”

Washington has kept its eye peeled on the Caucasus since the very moment the dissolution of the Soviet Union in 1991 opened the region up to it for the first time. It has endeavored to subjugate the region’s nations en bloc, but emphasis has always been on Azerbaijan in particular, as that country connects the Caucasus with the Caspian Sea. As such it is the main source for Caspian Sea oil and natural gas for the West, as part of a broader policy of driving Russia and Iran out of the European energy market, and it’s also a military outpost for the U.S. and NATO targeting those two countries as well. The West desires to transform the Caspian Sea, as it has the Baltic Sea and the Black Sea, into a NATO lake.

The year after the disappearance of the Soviet Union, Margaret Thatcher arrived in the Azerbaijani capital of Baku to seal a contract for British Petroleum.

In 1994 Azerbaijan’s President Heydar Aliyev, father of the present head of state and “conqueror” of Nagorno-Karabakh Ilham Aliyev, announced The Contract of the Century to open up the Azeri and Chirag oil fields to eleven, largely Western, oil companies.

In the interim the U.S. and NATO have supported the creation of what one former American diplomat described as an Azerbaijan-Georgia-Turkey corridor that brings oil and gas from east to west and troops and armaments from west to east. Components of that vast project include the Baku–Tbilisi–Ceyhan oil pipeline, the Baku–Tbilisi–Erzurum natural gas pipeline and the Baku–Tbilisi–Kars railway.

Also, in conjunction with the above Turkey was appointed NATO’s sponsor for its “one nation, two states” pan-Turkic neighbor Azerbaijan and Georgia. Georgia’s war against South Ossetia (and with Russia) in 2008 and Azerbaijan’s war against Nagorno-Karabakh and Armenia last year occurred within that context and, as with energy transit and control of the Caspian Sea, the targets were Russia and Iran.

“Washington regards the region as a springboard for ousting Russia from the Caucasus-Caspian region and preventing Iran from strengthening its positions. The importance of the South Caucasus in US foreign policy is also due to the hydrocarbon resources of this region and their transportation to Europe.”