An excellent study of the manufactured Labour “antisemitism crisis” 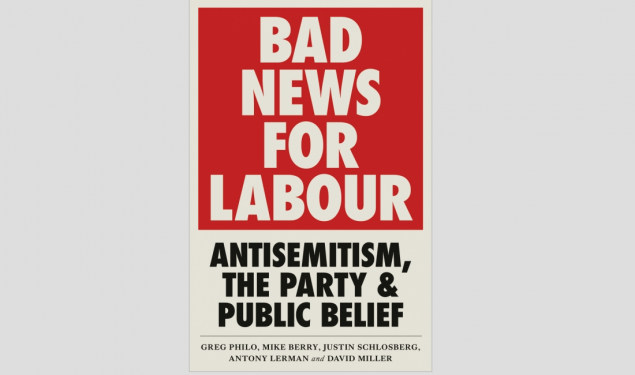 There has been an extraordinary media output on the issue of Jeremy Corbyn, the Labour Party and antisemitism. Accusations about the Labour Party have made headlines on a daily basis. In the three years after Corbyn became leader there were over five thousand news stories and articles in the national press alone. Bad News for Labour examines the impact of this coverage on public beliefs about the Party. It replaces media hype with the rigorous analysis of evidence. The authors draw on carefully compiled research to reveal surprising findings in this guide to the reality behind the headlines.

The launching point for the book’s analysis is a national poll, accompanied by the use of focus groups, on how people make judgments and form opinions.

The results showed that on average people believed that a third of Labour Party members had been reported for antisemitism. A key part of the authors’ investigation was to examine how it could be that so many people came to believe this when the actual figure was far less than 1%.

The book focuses on how this chasm between (mis)perception came to exist. The authors used questionnaires as part of their survey, and the anonymous written answers show just how ignorant and poorly informed many Brits are— a significant percentage believe what they read in the trashy rightwing tabloids or what they see on TV!

Some focus group members even believed Corbyn would bring in Sharia Law if elected.

At the same time focus group members believed the controversy has done serious damage to the party.

What is clear is that for Ukania’s Joe and Jill Normal, who don’t often go beyond the newspaper headlines to look at news sources, etc., it is the case that

MASSIVE MEDIA COVEREAGE OF X = X MUST BE A BIG PROBLEM.

Bad News for Labour then looks at the plethora of competing positions and interests within Labour which created a confusing context for dealing with the antisemitism controversy. The authors identify 3 main areas:

1) the argument that there was a significant and widespread problem regarding antisemitism within the Labour Party;

2) that the issue was being used to undermine Labour’s left leadership, and specifically Jeremy Corbyn, as part of the internal politics of the Party;

3) that the controversy was linked to the defence of Israel and attempts to change Labour policy with regard to that state.

The crucial factor here is that no matter what steps Labour’s left leadership takes to deal with the party’s antisemitism problems (and these steps have been taken, unevenly and somewhat slowly), those bent on ousting Corbyn as leader for reasons internal to the party’s politics will not cease their efforts no matter what Labour does to address antisemitism within its membership.

The perfect example here is Tom Watson, Labour’s deputy leader, who is on the payroll of the UK’s Zionist lobby. Watson did his utmost to stoke the fires of the antisemitism crisis. Sensing now he has played his full hand on this issue, he is currently using Brexit as his foil for attacking Corbyn.

Labour has edged its way towards a fragile truce within itself on Brexit, by making the ridding of Johnson and the Tories its priority, so that having a general election is the first objective, and only after that can such matters as a second EU referendum with options of a viable deal and remain be contemplated.

Watson is now trying to upset this arrangement by saying a second Brexit referendum has to come before a general election (echoing a position taken by Blair a few days before)— a ridiculous proposition, because having a referendum first will simply reopen divisions within Labour that existed during and after the first Brexit referendum. Far better to win an election, which will leave Labour more in control of events (and probably more united by virtue of electoral success), and then tackle the thorny matter of a second EU referendum.

Watson was promptly slapped down by Corbyn.

Bad News for Labour sensibly suggests that the best way for Corbyn and the party’s left to overcome these attempts by Labour’s mainly Blairite rightwing to undermine the Left is for the Blairites to be deselected by their local Labour parties as candidates in the next election.

Several Blairites, knowing they face deselection, have already jumped ship and joined the centrist Lib Dems while a couple went on to be Independents. Other Blairites, knowing which way the wind is blowing, have announced they won’t be standing in the next election.

The outrage of the Labour Zionists making life difficult for Corbyn is highly selective. It is certainly true that some of these Labour MPs received antisemitic abuse (though mainly from people who were not party members).

At the same time, the Labour politician Diane Abbott, a Corbyn ally who is shadow home secretary/interior minister, was targetted by racists, though this has received much less media attention. Amnesty International’s research showed that Abbott received 45% of all abusive tweets sent to female MPs in the 6 weeks before the 2017 election.

The crux of Labour’s antisemitism controversy is the bruhaha over its grudging acceptance of the flawed International Holocaust Remembrance Alliance (IHRA) definition of “antisemitism”. The media’s coverage of this controversy was framed by 2 assumptions: that under Corbyn antisemitism in Labour had become “institutionalized”, and that Corbyn and his associates had failed to counter this.

The IHRA definition is deeply flawed, so much so that it is deemed not fit to be given any legal standing.

The IHRA examples in effect make it automatic that any characterization of Israel as “racist” is perforce “antisemitic”, in this way placing Israel’s apartheid policy towards Palestinians beyond criticism.

Under immense pressure Labour alas caved-in and accepted the definition and all its examples.

Perhaps the fact that the Equalities and Human Rights Commission’s announcement in May that it was investigating Labour’s handling of antisemitism complaints following submissions from the Jewish Labour Movement and the Campaign Against Antisemitism had something to do with Labour’s capitulation on this score.

Bad News for Labour therefore trades on a double entendre—news that is bad for Labour, but also “faux news” that itself is bad precisely because of its all-too-common distortions, biases, and underlying malicious intent. It’s no surprise that two Murdoch papers, The Times and Sun, have been at the forefront of this campaign against Labour.

Perhaps more surprising are the outfits that kept company with Murdoch newspapers in this campaign against Corbyn, namely, the supposedly objective BBC and the “progressive” Guardian, both of which matched the Murdoch rags step for step in a rush for the gutter.

Bad News for Labour presents a flood of evidence detailing how this campaign was confected and what its effects on the party have been.

Since I’m a British citizen I’ll be in the UK next week attending the Labour Party annual conference as a member-delegate. Testing the waters on this issue will be interesting to say the least.

Meanwhile the media say nary a word about the rampant Islamophobia in the Conservative Party (starting with its leader, BoJo, and his insouciantly feeble jokes about burka-wearing women looking like “letter boxes” and “bank robbers”, and so on), and the fact that surveys show antisemitism to be more prevalent in the Tories than it is in Labour.