The American Psychological Association has taken measures to repudiate any participation in military or national security “enhanced interrogation” techniques after a report found “disturbing” evidence of “collusion” by some members in U.S. actions at Guantanamo Bay and other sites housing terrorism suspects. 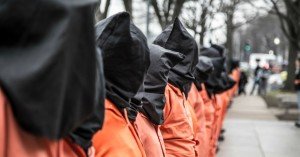 A convention of the American Psychological Association, meeting in Toronto, overwhelmingly passed a resolution Friday night prohibiting its members from taking part in U.S. military and national security interrogations. The resolution, which passed 156-1 with seven abstentions, brings the association in line with the American Medical Association and other large health-related organizations that have similar bans in place, noted University of Dallas psychology professor Scott Churchill.

“I’m still pinching myself. It’s a major step forward. Everyone who’s involved feels that we have done something public and done something effective,” said Churchill, who sponsored the resolution. “Psychologists will be prohibited from participation in interrogations in unlawful sites and settings that operate outside the Geneva Convention and the United Nations Convention Against Torture,” he added.

The association commissioned a review last fall, known as the Hoffman report, that uncovered “deeply disturbing findings that reveal previously unknown and troubling instances of collusion” between a small number of association staff and members and U.S. national security agencies, past president Nadine Kaslow noted.

“The actions, policies and the lack of independence from government influence described in the Hoffman report represented a failure to live up to our core values. We profoundly regret and apologize for the behaviour and the consequences that ensued,” Kaslow said after the report’s release.

Kaslow said in a statement that the convention resolution is “a concrete step toward rectifying our past organizational shortcomings.”

The association has 122,500 members, including provincial associations in Canada.

“We have much more work ahead as we change the culture of (the association) to be more transparent and much more focused on human rights,” said president-elect Susan McDaniel.

Following the 9/11 terrorist attacks, the issue of the former Bush administration’s use of “enhanced interrogation” techniques amounting to torture against prisoners at Guantanamo Bay and at secret prisons elsewhere known as “black sites” has become a major public issue in the U.S.

McDaniel said the next major step is for the resolution to go to the ethics committee, with the expectation that the association’s code of ethics would be updated to include tougher, more enforceable sanctions against members.

Vancouver – Today, the BC Civil Liberties Association and the John Howard Society of Canada filed a lawsuit against the Attorney General of Canada challenging the use of solitary confinement in Canadian prisons as unconstitutional.

The lawsuit alleges that the use of solitary confinement – where prisoners are isolated for up to 23 hours a day, sometimes for months and years at a time – amounts to cruel and unusual punishment. The lawsuit argues that the solitary confinement regime leads to prisoner suffering and deaths, deprives prisoners of fundamental procedural protections and is discriminatory against both mentally ill and Aboriginal prisoners.

International bodies and experts, including the UN Special Rapporteur on Torture and the UN Committee against Torture have concluded that prolonged or indefinite solitary confinement can amount to torture…

Mr. Sapers said in the first four months of 2015-16 there were 31 deaths across the country, while in all of the prior fiscal year there were 67 deaths.