Turkey’s top judicial body has decided to dismiss five prosecutors who were involved in investigations of trucks filled with weapons going to Syria belonging to the Turkish intelligence agency in January of last year. The Supreme Board of Judges and Prosecutors (HSYK) announced on Thursday its decision to dismiss former Prosecutor Süleyman Bağrıyanık, former Deputy Prosecutor Ahmet Karaca and former Prosecutors Aziz Takçı, Özcan Şişman, Yaşar Kavalcıklıoğlu from their posts. 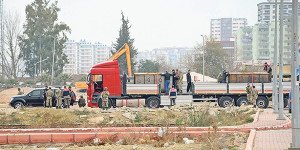 An anonymous tip early in 2014 led to the search of several trucks on suspicion of weapons smuggling. It was later discovered that the vehicles belonged to the National Intelligence Organization (MİT). The first operation took place in the province of Hatay on Jan. 1, 2014. Another anonymous tip led to three more trucks being stopped and searched in the southern province of Adana on Jan. 19, 2014.

The weapons were allegedly intended for extremist groups in Syria; however, the government claimed the trucks belonging to MİT were filled with humanitarian aid headed for Turkmens in northern Syria, and labeled the investigations acts of treason.

President Recep Tayyip Erdoğan, who was prime minister at the time, claimed immediately after the interception of the trucks became public that the vehicles were carrying aid supplies to Turkmens in Syria.

Many high-level Turkish officials, including then-President Abdullah Gül, said immediately after the trucks had been intercepted that the trucks’ cargo was a “state secret,” which led some to speculate that the trucks were carrying arms.

President Erdoğan recently unwittingly validated claims made by critics that the Turkish government was sending weapon-filled trucks to radical groups in Syria by sarcastically asking, “So what if the MİT trucks were filled with weapons?”

Erdoğan blamed the prosecutors investigating the MİT trucks for denying the Turkmens in northern Syria the ability to defend themselves. “Those [MİT] trucks were taking aid to the Bayır-Bucak Turkmens. Some said, ‘Prime Minister Erdoğan said there were no weapons inside those trucks.’ So what if there were?”

However, Syrian-Turkmen Assembly Vice Chairman Husain al-Abdullah said in January 2014 that no trucks carrying aid had arrived from Turkey.

The five prosecutors had been suspended from their duties pending an investigation by the 2nd Chamber of the HSYK.

The president of the chamber, Mehmet Yılmaz, previously made headlines when he “apologized” to the public for being late in taking action against two judges who had ruled for the release of journalist Hidayet Karaca. Many understood Yılmaz’s apology as being towards Erdoğan.

Bağrıyanık, Karaca, Takçı and Şişman and former Adana provincial gendarmerie commander Col. Özkan Çokay were imprisoned in early May 2015 on charges of attempting to “topple or incapacitate the Turkish government through the use of force or coercion” and “exposing information regarding the security and political activities of the state.”

Haberdar.com, an online news portal, recently revealed that the Ministry of Justice had sent a memo in December of last year to the Tarsus 2nd High Criminal Court, a day before the trial, demanding the arrest of former Prosecutors Takçı, Şişman, Karaca, Bağrıyanık and Çokay.

The memo was signed by Judge Yurdagül Keskin, and demanded that the judges arrest the prosecutors and the provincial gendarmerie commander. It was sent to the Tarsus 2nd High Criminal Court on May 7, and the hearing of the case was set for May 8, therefore revealing that the court had already intended to arrest the defendants before the hearing even began.

The Syrian government’s recent military operation backed by Russian air strikes in a rural area of Latakia inhabited by Bayır-Bucak Turkmens has caused thousands of Turkmens to flee to the Turkish border. A Turkmen brigade commander called for Turkey’s assistance and expressed his frustration that Turkey has not helped enough.

Turkey has wanted Syrian President Bashar al-Assad removed from power ever since the start of what is now a full-fledged civil war in the spring of 2011 in its neighbor. 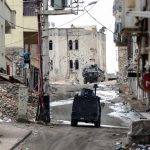