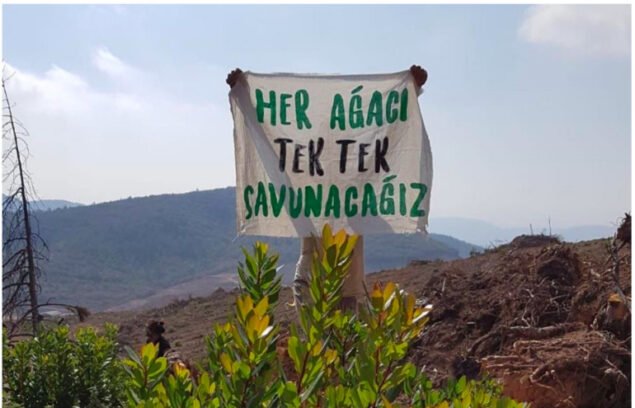 Canadian mining company Alamos Gold may have left Turkey’s Ida Mountains [Kazdağları] but rehabilitation work has not started in the region where nearly 350 thousand trees were cut; Cengiz Holding and Koza Gold are continuing their mining activities.

After the Canada-based Alamos Gold company, which caused the felling of nearly 350,000 trees, left the Ida (Kaz) Mountains in northwestern Turkey, the mining threat still continues in the region, according to environmental advocates.

bianet talked to Ekrem Akgül, the chairperson of the Ida Mountains Solidarity Association and a member of Water and Conscience Watch Coordination, about the latest situation in the Ida Mountains.

The process that started with felling four times more trees than predicted in the Environmental Impact Assessment (EIA) report during the mining activities carried out in the village of Kirazlı in Çanakkale province in July 2019 still continues, he said.

Alamos Gold, which has caused the greatest forest slaughter in the Ida Mountains, announced in late April that it had stopped its operations and would file a one billion dollar compensation claim against Turkey. However, domestic companies such as Koza Gold and Cengiz Holding have taken over the destruction in the region with their gold mine activities, noted Akgül.

On the other hand, according to Akgül, there has been no activity in the Kirazlı minefield after Alamos Gold withdrew. Rehabilitation work has not started yet.

Cengiz and Koza are operating

Akgül gave the following information about the latest situation in the region: 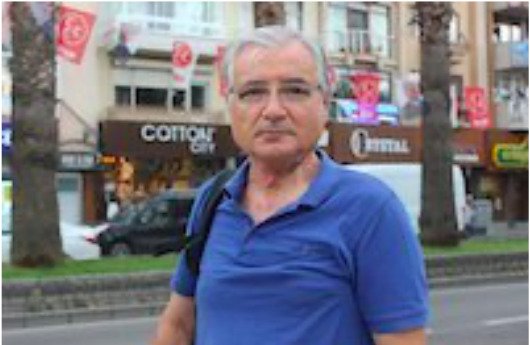 “While continuing to drillings, Koza has started a new EIA process with the demand for Capacity Increase. EIA Public Participation Meeting announcement was made on May 25. In Halilağa, Cengiz Holding’s EIA process is at the last stage.”

Akgül says that they could not go to the region due to the lockdown, but they have tried to keep them under observation and keep in touch with those living in nearby villages:

“There are experts who say that the rehabilitation of Kirazlı will take a long time and that the stripped living soil is not in the middle, that is, even if it is laid on the rock, it will flow with rainfall. A long and costly process awaits Kirazlı.”

Mining in the region

Reminding that they have started the protests there, after the legal process in Kirazlı was concluded in favor of the company in the State Council, Akgül also stated that they filed an EIA Cancellation Case at Koza Serçiler Enterprise and that the Çanakkale Administrative Court decided for a second expert report:

“The region is completely under the occupation of miners at distances of 10-15 kilometers in air distance. We cannot enter the fields due to coronavirus restrictions. We’ve been fined many times. However, our struggle will continue until the Ida Mountains are liberated.”

The tree fellings carried out by Alamos Gold company for mining activities in the Ida Mountains have caused a great reaction in the society, and tens of thousands of people went to the region to protest the company. The tent watch started against mining activities in Kirazlı had continued for 425 days.

After the license period of the company expired on 13 October 2019, the license had not been renewed, Çanakkale Regional Directorate of Forestry had stated in the response to the Presidency’s Communication Center (CİMER) application that the company’s permit cancellations would be made and plans for the rehabilitation of the region would be started.

Ahmet Şentürk, General Manager of East Biga Mining, the Turkish branch of Alamos Gold, had said, “We are not going anywhere from the Ida Mountains, we have a license for 60 years, we will extract the mine underground as promised to the Republic of Turkey.”

The company, which caused the felling of nearly 350,000 trees for the gold mine project it wanted to do in the Ida Mountains, Canada-based Alamos Gold, which continues its existence unlawfully, announced that it had made an arbitration application to Turkey on April 21st.

The company, which announced on its official website that it has requested 1 billion dollars in compensation from Turkey, showed that they could not get an explanation as to why their permits were not renewed and that they suffered losses during this process.

The company, which invested in Turkey through a subsidiary established in the Netherlands, said that Ankara had violated the bilateral investment agreement with the Netherlands and asked for compensation for “seizure, unfair and unjust treatment.”

Finally, Minister of Agriculture and Forestry Bekir Pakdemirli, who answered the motion of Republican People Party’s (CHP) Ali Öztunç, stated that the field had been taken back from the company and rehabilitation works has started in the region.

Although it was introduced to the public as a copper mine project, the EIA process under the name of “Halilağa Gold Mine Project” was carried out in 2012 for the same license area and the EIA positive decision was taken. However, due to the reaction of the local people, the project could not be implemented so far.

What is in the project?

The EIA permit area obtained for the copper mine consists of a total of 603 thousand 53 hectares and three polygons.

According to the EIA application file, 90 million tons of ore will be extracted from the quarry area and delivered to the enrichment facility with a capacity of 6 million tons per year to produce concentrated products. Halilağa Copper Mine Project will have a life span of 19 years including two years of construction, 15 years of operation, and two years of closure.

It has been claimed that 2 thousand people will be employed during the land preparation and construction phase and 1,000 people will be employed during the operation phase, and the employment will be provided from “Hacıbekirler, Muratlar, Halilağa, Yanıklar, Osmaniye, Yaylacık villages, especially Çan and Bayramiç districts, and Çanakkale and Turkey.”

Distance to villages and wetlands

The closest water source to the mine, Küçüklü Pond, is 6.67 kilometers away. Bayramiç Işıkeli Pond and Bayramiç Yeniceköy Köylüçay Pond, close to the EIA areas 1 and 2, are used for irrigation purposes.

To the east of the EIA area No. 1, at a distance of 12.05 kilometers, is the Uzunalan Dam at the master plan stage. Others used as drinking and irrigation water dams around the EIA areas are Altınzeybek-2 and Bayramiç Dam.

In the middle of two large projects

The Halilağa Copper Mine Project is in the middle of the Kirazlı Gold Mine and its other pillar Mount Ağı Gold Mine projects, which received a great reaction in 2019.

How has Cengiz Holding come?

East Biga Mining, the domestic partner of the Canadian company Alamos Gold, which cut 200 thousand trees in the Ida Mountains, had ended its works in the region due to their expired construction license on 13 October 2019, and thus nature has started to renew itself. While the company, which has not had a license for 10 months, is still not evacuated, Cengiz Holding stepped in.

Cengiz Holding purchased Truva Copper Corporations, which has been conducting exploration activities in the region for years, from the Canadian Liberty Gold and Teck Resources for 55 million dollars.

According to the Mining Report in the Ida Mountains Region published by the Turkish Foundation for Combating Soil Erosion (TEMA) in April 2019, in Çanakkale where Halilağa Mining Project is included; 75 percent of Çan district, 62 percent of Bayramiç, 53 percent of Ezine, 47 percent of Lapseki, and 44 percent of Yenice are licensed for mines. (TP/DCE/VK)

***
Further reading: How has Cengiz Holding destroyed Turkey’s forests?
Further reading: Report on Ida Mountains: 79 percent of the region is mining licensed
Editors’ Note: While we don’t necessarily share the views we publish on New Cold War, we do attempt to provide readers with a range of views. This is because your right to make your own mind up depends on your being fully informed.
Share
Tweet
Share
Pin