Al-Baghdadi killing: knocking off the odd man out 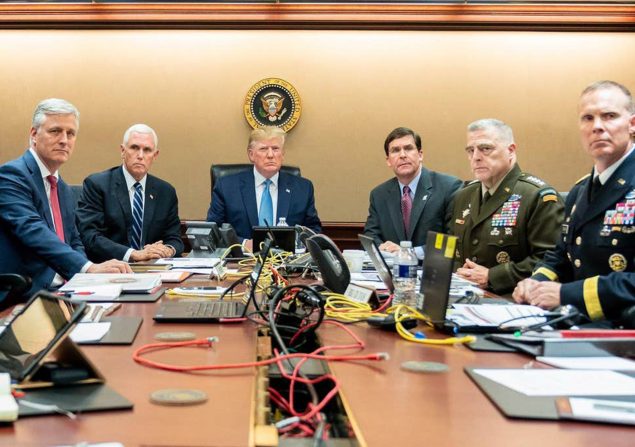 While the main focus of commentary and skepticism was over whether Abu Bakr al Baghdadi had really died, in the way so graphically and poetically described by Donald Trump, inconsistencies and peculiarities surrounding the existence and destruction of the house went largely unnoticed. Until now…

Following the alleged US raid and destruction of a house in NW Syria on 28th October where the notional leader of Da’esh was allegedly living, I spent some time analyzing photographs and satellite images of the site. While the main focus of commentary and skepticism was over whether Abu Bakr al Baghdadi had really died, in the way so graphically and poetically described by Donald Trump, inconsistencies and peculiarities surrounding the existence and destruction of the house went largely unnoticed.

And there were many! The first report from Al Jazeera, who had a local correspondent walking over the bombed site the following morning, conveniently identified its location near the village of Barisha in a “zoom-in” from Google’s satellite map, and the map displayed in their report was the same as the one that came up when I found it in a search on the 30th October. Inexplicably at the time, the house appeared to have already been destroyed!

Perhaps this also confused Al Jazeera, as they had identified one of the neighboring houses as the “suspected compound” hit in the strike, despite this house being clearly visible in the video report from Alaa Eddine Youssef which followed. This was before the Pentagon released drone footage of the operation and video of the subsequent airstrike, and before local scavengers and militants had removed material and altered the site’s appearance.

There were two possibilities to explain the aberrant Google satellite image, which showed a partly built or partly destroyed building as well as what appeared to be a large crater. The image accredited to Maxar Technologies 2019 could have predated the construction of the house, or post-dated its destruction, with the latter option obviously giving the lie to the US claims they had just launched the operation and that Al Baghdadi had only recently arrived there.

Given the appearance of the bombed site and the unconvincing and changing story from the White House, I chose to investigate this “conspiracy” option, postulating that the house shown in other satellite images in the media and in the Pentagon videos had been targeted months earlier, and the site then covered with loads of broken concrete and stone. Examining details in other areas of Syria demonstrated that the current Google satellite photo was taken later than mid-2017, and I assumed that the house must have been older than that.

Wrong assumption! On the verge of submitting this contentious claim, I noticed that one of the satellite images used in the media showing Abu Mohammed Al Halabi’s house also showed foundations of a new house nearby that didn’t appear in the currently available image on Google maps. Reports from different media sources had variously claimed that Al Halabi – a commander with the Hurras al-Din terrorist group – had bought the house two years ago, or sold it, or that the house had been built only two years ago.

Only at that point did I discover that “historic” satellite images can be viewed on Google Earth – but only on the downloaded desktop version and not on Google Chrome. Below is a composite of images from 2016, when none of the current buildings was present, up to the latest available there dating from September last year, when Al Halabi’s house was newly completed. The current satellite image on Google dates to January 2018, when excavations and preparations were being made. At the bottom right is an image from the Independent’s article of 28th October, supplied by Maxar but curiously printed upside down, in common with images displayed in other mainstream media reports. The foundations of a new house not visible in the image from September 2018, of which the walls now appear completed in current photographs, suggest the Independent’s image is from mid-2019. 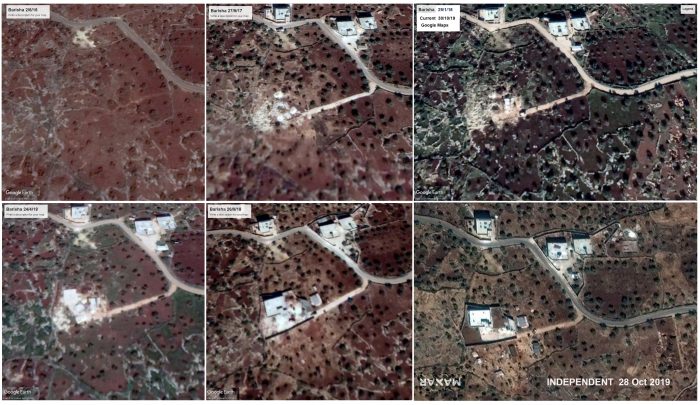 In the Al Jazeera report, Youssef states that the house was owned by Abu Mohammed al Halabi (“the Aleppan”), but that “he was not the target”. This implies that he might well have been the target – and for good reason; Al Halabi had a long dubious record of association with Hurras Al-Din, an extreme Salafist group closely allied to Da’esh, and one which the US claims to have been targeting. In recent months the US has launched a number of such strikes in Western Syria targeting members of Hurras Al-Din, including a recent one in a town not far from Barisha.

Abu Mohammed al Halabi, the nom de guerre of Mohammed Salama, who was notorious in Aleppo as a “trader and smuggler”, was also well known as a fighter and commander from back in 2014, when Liz Sly of the Washington Post wrote about his activities around the Turkish border crossing of Azaz, and his allegiance to Al Qaeda. At that time rival armed groups fought for control of this important point, which was a main supply route for “rebel-occupied” Aleppo. Bel Trew writing in the Independent also provides much detail on the circumstances and nature of Mohammed al Halabi’s relationship with Baghdadi, which sounds feasible but cannot be easily verified.

More to the point is the degree of cooperation between Turkish intelligence and these extremist groups, indicated by the evident freedom with which fighters could pass over the border crossing at Azaz, but also the crossing at Bab al Hawa – which coincidentally lies very close to where Al Halabi built his house last year. On one particularly notable occasion in late 2016, Turkey facilitated the transport of bus-loads of Al Qaeda fighters out of Syria at Bab al Hawa and back in through the Azaz crossing, where they went to provide support to the besieged insurgents in East Aleppo.

Turkey’s support for various militant groups in NW Syria is hardly a secret, nor its early cooperation with the US in acting as a staging post for fighters and weapons from North Africa and elsewhere. Not to mention the long covert cooperation with IS in the oil-smuggling trade out of Eastern Syria. So we might greet with some skepticism Erdogan’s announcement that several members of Abu Bakr al Baghdadi’s family have just been detained in Azaz. One wonders if they may have been living there since the newly formed ISIL took over that section of the Turkish border in late 2013!

While this historic collaboration between Turkey and the US/CIA in assisting terrorist groups in Syria including Al Qaeda and Da’esh may appear to be currently faltering over the Kurdish question, their collaboration must go deeper than this, and a joint operation to “kill Baghdadi” must be considered feasible. But as with Bin Laden, the object of killing the terrorist group leader was not because he personally presented any further danger; confecting his death would achieve the same objectives.

Those objectives must be seen as the opposite of what they appear; rather than sealing the end of Baghdadi’s caliphate they allow it to be reborn under a different leader and with a different form. Just as Al Qaeda needed to die so that ISIS could be born from its ashes, so Baghdadi’s ISIS now needed to die so that its replacement – even under the same name – can provide the necessary Trojan Horse for the renewed war – on Iran. Mention of the “Khorasan” group in this context is worrying, as Khorasan is a region northeast of Tehran from where its leaders are presumed to come.

Having thus provided a rationale for the staging of a strike to kill Baghdadi, whose timing and actual target were not of primary importance, we may view the images of Al Halabi’s destroyed house without prejudice. Immediately it can be seen that the site does NOT look like that of a house that was bombed only the previous night. In fact, it doesn’t look much like the site of a bombed house at all! 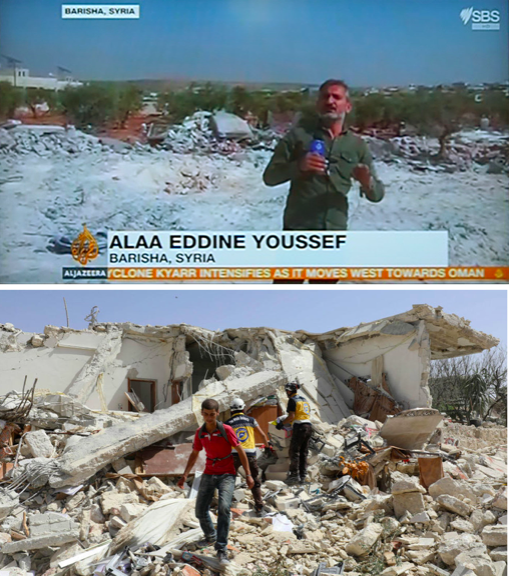 One of the things which sticks in the mind from the innumerable images of bombed buildings in Syria we have seen for the last eight years is the persistence of reinforced concrete slabs, such as would have formed the roof of Al Halabi’s house. The absence of any such slabs or visible fragments of that roof is remarkable by itself. Instead, in the area where the house stood is what appears to be a pile of pulverized and flattened material, surrounded by piles of rubble.

A close study and comparison of images of the remains of Mohammed Al Halabi’s house published in various different media on the 29th and 30th October reveals some strikingly aberrant features that make it impossible to believe the Pentagon’s – and the White House’s claim that the strike was carried out on the previous night. In the images below I have circled two piles of stone and concrete rubble which do not appear to have come from the house as a result of the explosion following the US airstrike. While the blast appears to have knocked over the perimeter wall quite cleanly on the south and west sides, there is simply no explanation for the presence of a large mound of rubble in that south-west corner of the compound, marked ‘1’.  If its origin was Al Halabi’s house, then it was pushed there with heavy machinery. 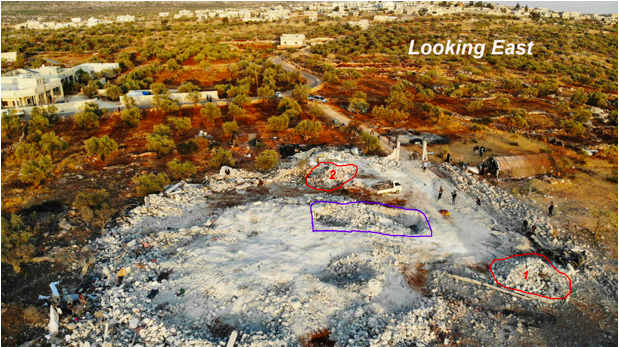 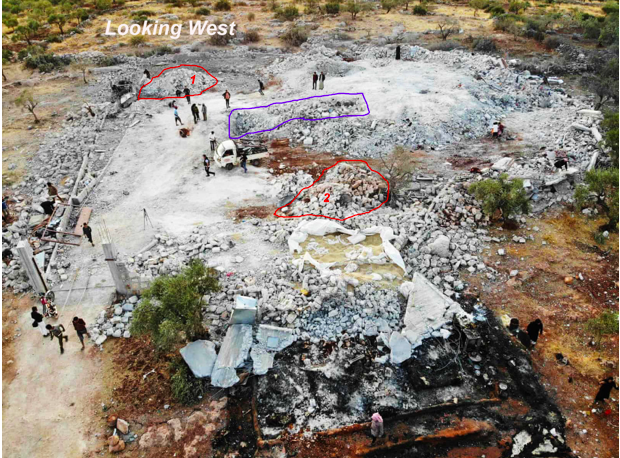 The second marked pile of rubble might have come from the garage beside the gates into the compound, whose angled broken roof slabs can be seen there, but it lies on the house side of where the building stood, and beside a small but living olive tree. By contrast, there are charred remains of two smaller buildings on the east side which look recent, as well as a large area of blackened olive trees extending from the north side of the compound towards a neighboring house. In initial reports of the bombing, shaky video of a fire and some small explosions taken from Barisha village were shown, and we might assume this was the result.

The exact position of these rubble heaps in relation to the house can be seen in the composite image below, where I have aligned and superimposed the walls of the compound visible in the Pentagon’s drone image with the line of the walls still clearly visible in a drone image of the site taken following the announcement of the bombing. The Pentagon image immediately preceded the bombing of the building, which was hit first at the point indicated by a purple cross, towards the southwest corner of the roof. 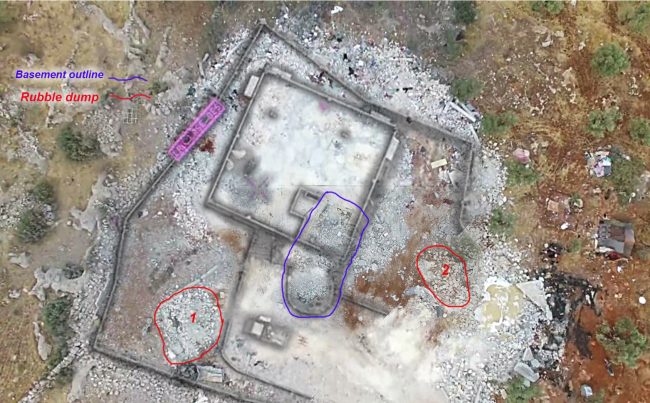 Other features visible more clearly in this view are the small truck – which appears to have been pushed over to the wall, and behind rubble heap ‘1’, and the outlines of the basement or “tunnel” entrance, which lay beneath the building’s tower section and the circular pad in front of it.

The word “cover-up” springs to mind, and it will take more than a few truck-loads of concrete rubble to cover up the crimes committed by the Western allies and their proxies in Syria.