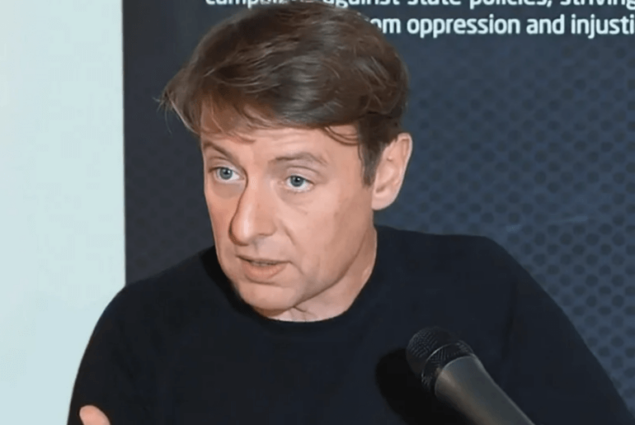 Britain’s pro-Israel lobby gained another important scalp last week after a prolonged campaign of intimidation finally pushed a major UK university into firing one of its lecturers.

Bristol University dismissed David Miller, a political sociology professor, even though an official investigation had concluded that accusations of antisemitism against him were unfounded.

Research by Miller, a leading scholar on propaganda, had charted networks of influence in the UK in relation to Islamophobia that included the very pro-Israel lobby groups that worked to get him fired.

The decision is likely to prove a severe blow to academic freedoms in the UK that are already under growing threat from efforts to silence criticism of Israel in the wake of reports from Israeli and international human rights describing it as an apartheid state.

Bristol faced a similar campaign four years ago against another professor, Rebecca Gould, years after she wrote an article on how Israel used the memory of the Holocaust to “whitewash its crimes” against Palestinians. Despite demands that she be sacked, Gould survived, possibly in part because she is Jewish.

But since that attack, an emboldened pro-Israel lobby has been increasingly successful in conflating criticism of Israel – and the activities of groups that seek to shield Israel from scrutiny – with antisemitism.

The lobby smelled blood with the success of its years-long campaign to vilify the previous leader of Britain’s opposition Labour party, Jeremy Corbyn, an outspoken supporter of Palestinian rights. They argued that he had presided over a plague of antisemitism in Labour. Corbyn stepped down as leader last year.

The evidence-free claims of an “antisemitism crisis” under Corbyn were amplified by the billionaire-owned media and Labour’s own right-wing bureaucracy, both of which wanted the socialist Corbyn gone.

In a sign of the lobby’s continuing hold on political discourse in the UK about Israel and antisemitism, Corbyn’s successor, Keir Starmer, has been purging the party of Corbyn’s supporters, including Jews, smearing them as antisemites.

At Labour’s party conference last month, however, Starmer faced a backlash. Delegates voted in favor of a motion declaring Israel an apartheid state. The motion also demanded sanctions against Israel’s illegal settlements on Palestinian land and an end to UK arms sale to Israel.

With Bristol’s sacking of Miller, the key battleground appears to be shifting to academia, where it is feared that the idea of Israel as an apartheid state may gain a foothold. The lobby has been noisily celebrating the professor’s dismissal, presumably in the hope that a clear message is sent to other academics to rein in their public criticisms of Israel.

The campaign against Miller started more than two years ago, after the professor published research on “five pillars of Islamophobia” in British society. One diagram illustrated the organizational ties between pro-Israel lobby groups in the UK and a set of what Israel terms “national institutions” in fomenting Islamophobia.

2. The CST claim this slide showed ‘mainstream UK Jewish orgs & individuals in a network under "Israel government". In context of a lecture about Islamophobia this echoes conspiracy & dual loyalty tropes’ pic.twitter.com/cHdiRKNcYo

Miller was bringing to light the influence of this network of transnational institutions that in Israel’s view represent a global “Jewish nation” whose homeland is Israel.

(Paradoxically, the Zionist belief that Jews form a single people who need to organize globally through a complex network of transnational and local institutions to ward off antisemitism neatly mirrors antisemitic ideas of Jews being part of a global conspiracy.)

So-called “national institutions” such as the Jewish National Fund, the World Zionist Organization and the Jewish Agency all enjoy quasi-state authority in Israel while establishing affiliated local organizations in most major western countries.

For example, the JNF oversees racist land allocation policies that privilege Jews over Palestinians on behalf of the Israeli state while also having active branches in Europe and North America. And the WZO, which has a dozen or so affiliated organizations operating around the world, runs arm’s length operations for the Israeli state settling Jews on Palestinian land in the occupied territory.

Miller’s work showed how these agencies, effectively acting as arms of the Israeli state, have deep institutional and funding ties to UK Zionist groups – the same groups that have pushed for the redefinition of antisemitism in ways designed to silence criticism of Israel and that led the campaign against Corbyn.

His research suggested that the lobby’s promotion of Islamophobia had played a part of those campaigns.

Fear of Muslims and Islam has long bolstered a self-serving narrative that Israel stands with the Judeo-Christian west against a supposed Islamic barbarism and terrorism. Palestinians, despite the fact a significant proportion are Christian, have been presented as on the wrong side of that supposed civilizational divide.

Backed by establishment media, the Union of Jewish Students originally alleged that a lecture by Miller on Islamophobia had made two unnamed Bristol students “uncomfortable and intimidated”.

But far from representing all Jewish students, the UJS is an avowedly Zionist body, one affiliated through the World Union of Jewish Students to the World Zionist Organization, the “national institution” whose role includes directing Israel’s building of illegal Jewish settlements on occupied Palestinian land.

The UJS has also played a critical role in pushing for the adoption of a new definition of antisemitism at universities that, far from protecting Jewish students from hatred, is – as we shall see – designed to shield Israel from scrutiny.

Miller was cleared of the lobby’s initial allegations, but that served only to intensify the campaign against him. He was subjected to a follow-up investigation by Bristol university earlier this year.

In response, some 200 scholars, including prominent figures such as Noam Chomsky and Judith Butler, both of them Jewish, petitioned the university. Their letter noted the “unrelenting and concerted efforts to publicly vilify” Miller.

The professor, they added, was “known internationally for exposing the role that powerful actors and well-resourced, coordinated networks play in manipulating and stage-managing public debates, including on racism.”

Of a set of 11 supposed examples of antisemitism posited by the IHRA, seven refer to Israel.

Even the lead author of the definition, a Jewish lawyer, Kenneth Stern, has urged public institutions against adopting it, warning that it has been “weaponized” to stop speech about Israel. His warnings have fallen on deaf ears.

The ruling Conservative party has joined the pressure campaign, celebrating last month the fact that the number of British universities adopting the IHRA definition had rocketed by 160 percent over the past year – from 30 to 80.

That may in part be explained by the fact that the government has threatened the funding of any universities that refuse to comply.

Paradoxically, at the same as Boris Johnson’s government has been seeking to silence criticism of Israel, it has also been demanding an end to what it calls “cancel culture” at universities – chiefly attempts by students to deny a platform to racist and transphobic speakers.

The campaign against Miller has won the backing of large numbers of politicians from all parties, even the sole Green legislator, Caroline Lucas. More than 100 members of parliament wrote to Bristol university in March, echoing the lobby groups’ claims that the professor was “inciting hatred against Jewish students”.

Cleared of antisemitism, and fired anyway

Strangely, when Bristol launched its second investigation back in March, a government minister announced: “It is the responsibility of the University of Bristol to determine whether or not Prof Miller’s remarks constitute lawful free speech.”

In a statement on Miller’s dismissal last week, the university conceded that the senior lawyer it appointed had not found anything “unlawful” in Miller’s comments.

In fact, Miller told Mondoweiss, the university’s statement was itself misleading. Their lawyer’s report had, he said, “found that my comments were not antisemitic and that they did not in any way violate the Equality Act”.

Despite the lawyer finding in Miller’s favor, the university nonetheless sacked him. It saidit had “a duty of care to all students and the wider University community” and that Miller had failed to “meet the standards of behaviour we expect from our staff”.

This appeared to be the university’s mealy-mouthed equivalent of “bringing the party into disrepute” – the UK Labour party’s justification for suspending and expelling members when it proved impossible to actually find evidence against them to support claims of antisemitism.

Miller has said he will appeal, either using the university’s own internal procedures or referring the case to an employment tribunal.

Bristol may have problems defending its actions. Its statement poses more questions than it answers.

Does the university not also have a duty of care to Miller himself, if nothing he did was found to be unlawful or antisemitic?

And as the university admits that “members of our community hold very different views from one another” on the issues at the heart of the investigation, does it not also have a duty of care to Palestinian, Arab, Muslim and left-wing students?

The university has sent a clear message to them that their concerns about Islamophobia, and how it is being promoted in the UK, are a very low priority – and that even academics who speak in solidarity with them risk losing their job.

And how is it possible to square the university’s claim that it is committed to preserving “the essential principles of academic freedom” when it has so flagrantly caved in to an unsubstantiated campaign of intimidation?

Miller’s sacking makes it all but impossible for any other academic to consider either research into Islamophobia or an examination of the role of an important UK lobby, leaving these fields effectively off-limits.

Miller’s research has proved to have predictive value – one of the yardsticks for measuring the plausibility of its thesis.

The very networks of influence he identified as seeking to silence criticism of Israel quickly got to work trumpeting their victory against Miller on social media, making sure that other academics would get the message.

ACT.IL, which if it were operating on behalf of Russia rather than Israel would be described as a troll factory, rallied its followers to denounce Miller online for “spouting antisemitism”.

The case has been similarly misrepresented in the British media, which has been leading the campaign against Miller, as it did against Corbyn.

A report in the supposedly liberal Guardian described Miller’s case as splitting “the campus between staff and students who accused him of spouting antisemitic tropes in lectures and online, and those who worried that sanctions would stifle sensitive research”.

The assumption in the Guardian and elsewhere was that Miller had indeed “spouted antisemitic tropes”, and that the only question was whether sacking him was too high a price – given the danger it might stifle research.

It never occurred to the Guardian or other media outlets that some staff and students – as well as the Queen’s Counsel investigating the case – did not actually believe Miller had “spouted antisemitic tropes”.

In truth, Miller’s research and his statements on the lobby and Islamophobia only appeared antisemitic in a new, highly politicized sense of the term – cultivated by the Israel lobby – that criticizing Israel and its lobbyists causes offense.

But that is inevitable when research challenges popular assumptions or questions systems of power. Universities either support academic research and where it leads, or they do not.

Miller noted that the lobby’s success would encourage it to “redouble it efforts” to campaign for other academics to be dismissed.

Despite its weasel statement, Bristol has shown it has absolutely no commitment to academic freedom. The danger now is that few other British universities will stand up for that principle either.