After Embarrassing Defeat, NATO, EU and the West Try to Alter Reality in Macedonia 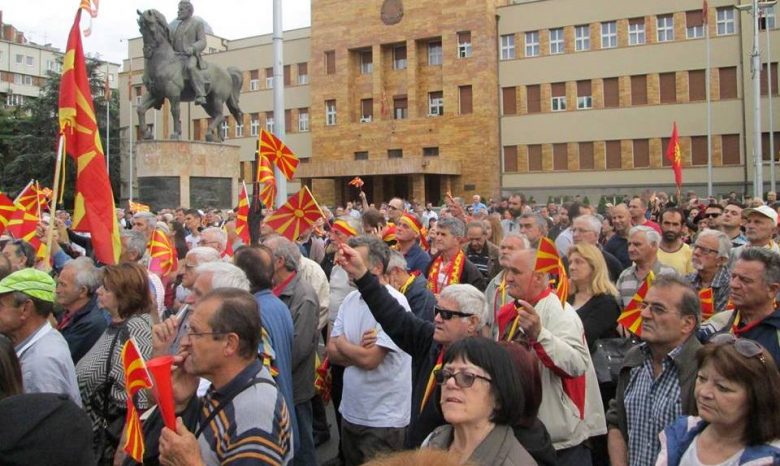 The result of the Macedonia name-change referendum – even with its promises of NATO and EU membership – was well below 50% and too low to be valid but this did not stop its its Western proponents and beneficiaries creating their own reality.

Although the September 30, 2018 name-change referendum in Macedonia, which was supposed to set that ex-Yugoslav federal republic on a path to (certain) NATO and (blithely promised but much less certain) EU membership, failed miserably, with only 36.91% of the voters turning out, well short of the 50% + 1 necessary for it to be valid – one would never know it from the reactions of its Western proponents and impatient beneficiaries. Indeed, a new term may be needed to adequately describe the reactions of the key pillars representing the reliquiae reliquiarum of the Western-led post-Cold War unipolar moment. Fake news simply doesn’t do them justice. Fake reality anyone?

The US State Department was firmly in denial, releasing the following statement:

The United States welcomes the results of the Republic of Macedonia’s September 30 referendum, in which citizens expressed their support for NATO and European Union (EU) membership by accepting the Prespa Agreement between Macedonia and Greece. The United States strongly supports the Agreement’s full implementation, which will allow Macedonia to take its rightful place in NATO and the EU, contributing to regional stability, security, and prosperity. As Macedonia’s parliament now begins deliberation on constitutional changes, we urge leaders to rise above partisan politics and seize this historic opportunity to secure a brighter future for the country as a full participant in Western institutions.”

EU Commissioner for European Neighborhood and Enlargement Negotiations Johannes Hahn wasn’t to be outdone in his contempt for the 63% of the Macedonian “deplorables” who stayed home in order to voice their disagreement with renouncing their perceived national identity and country name (it was to become “Northern Macedonia”) in exchange for the double joy of a) becoming NATO’s cannon-fodder in its increasingly hazardous game of chicken with Russia and b) the EU’s newest debt-serfs:

Referendum in Macedonia: I congratulate those citizens who voted in today’s consultative referendum and made use of their democratic freedoms. With the very significant “yes” vote, there is broad support to the #Prespa Agreement + to the country’s #Euroatlantic path. I now expect all political leaders to respect this decision and take it forward with utmost responsibility and unity across party lines, in the interest of the country.”

He was seconded the following day, in a joint statement, by Federica Mogherini, High Representative of the EU for Foreign Affairs and Security Policy and Vice President of the EU Commission. 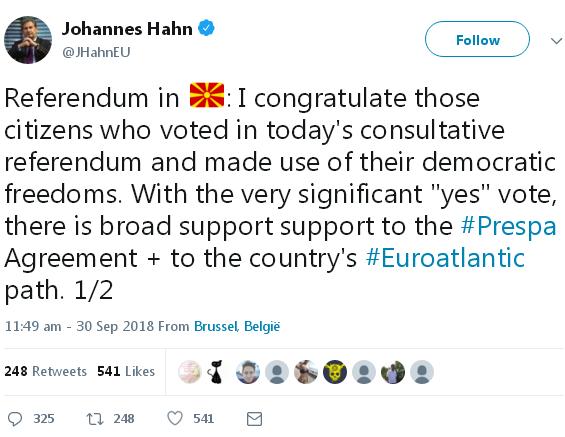 Understandably, as the most direct public stakeholder, NATO Secretary General Jens Stoltenberg was particularly (hyper)active. As the disappointing results began to roll in, Stoltenberg went into immediate damage control, tweeting: “I welcome the yes vote in Macedonia referendum. I urge all political leaders & parties to engage constructively & responsibly to seize this historic opportunity. #NATO’s door is open, but all national procedures have to be completed.” He reinforced his delusional missive the next day, releasing a similar statement co-signed by EU President Donald Tusk. And the day after, during a news conference, Stoltenberg even offered lightning-quick NATO accession to the unwilling Macedonians – January 2019, to be exact – if they would just be so kind as to urgently implement the very agreement that they had just so emphatically rejected. When NATO says it promotes democratic values – it means it! 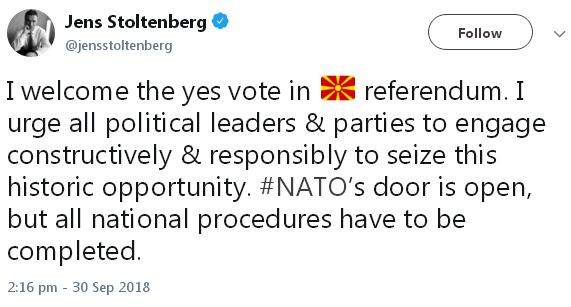 But that wasn’t the end of the “democracy mongering” surrounding what may well prove to be NATO’s, the EU’s and the rest of the end-of-history West’s Balkan Waterloo. For example, the EU Parliament’s Group of the Progressive Alliance of Socialists and Democrats, although “regretting that the turnout was less than 50%,” nevertheless hailed the referendum’s results and “call(ed) on the opposition to respect the expressed will of the majority [sic] of voters.” The Group’s leader, Udo Bullmann, while also maintaining that, somehow, a voter turnout of under 37% still represented a “majority,” additionally used the occasion to chastise Macedonia’s President for having the nerve to call for a boycott of the referendum (he committed the crimethink of referring to it as “historical suicide” during his UN General Assembly address), as well as to decry – what else? – “reports about Russian interference in the electoral process.” It goes without saying that Bullmann offered absolutely zero proof for his assertion. On the other hand, according to numerous media reports, as September 30 approached, while no high Russian official was to be seen anywhere in the vicinity, a veritable procession of Western political bigwigs made the pilgrimage to Skopje in order to reveal to the natives their “true” best interests: Sebastian Kurz, “Mad Dog” Mattis, the indefatigable Stoltenberg, Federica Mogherini, Johannes Hahn, Angela Merkel. No meddling there, obviously…

Speaking of Angela Merkel, she also joined her fellow Western democrats’ show of unanimous disdain for the Macedonian voters’ majority opinion, urging the country to “push ahead” with the implementation of the majority-rejected accord, citing voters’ “overwhelming support” [sic], and arguing through the mouth of her spokesman that the required 50% + 1 turnout was actually “very high,” as voter registers purportedly included many people who had long since left the country.

Coincidentally (?), the same argument was used by Greek Foreign Minister Nikos Kotzias, who opined that the “yes” votes cast in the referendum do, in fact, “represent the majority despite the low turnout because Macedonia does not have the 1.8 million voters entered into its electoral rolls but just 1.2 million since 300,000 people have left the country since the voter lists were last updated 20 years ago.” The fallacy of his reality-challenged claim is easily exposed if we just take a glance at the results of Macedonia’s last parliamentary elections (December 2016), in which voter turnout was just under 1.2 million (1,191,832 to be exact) or, officially, 66.79%. If we were to believe Kotzias and Merkel (who lodged no objections at the time), that would have meant that the turnout for the 2016 elections had been 99% – a figure that would make any totalitarian dictator blush with envy. On the other hand, since those elections did produce the “desired result,” enabling the current heavily pro-NATO/EU government led by Zoran Zaev to be formed, that automatically made them “valid” in the eyes of the high priests of democracy in Brussels, Berlin, London and Washington.

Needless to say, Zaev joined his Western patrons’ charade, hailing the referendum as a “democratic success,” and announcing that he would seek the Macedonian Parliament’s support to amend the constitution and get the agreement with Greece ratified (according to the so-called Prespa Agreement, the Macedonian Parliament must adopt the necessary constitutional amendments by the end of 2018) so that the Greek Parliament can do the same, which would seal the deal. However, Zaev and his Albanian political partners are currently well short of the necessary two-thirds majority (reportedly, they can count on 71 deputies, or 9 short of the needed 80), and will have to call early elections if they don’t soon succeed in securing it.

Yet, let it not go unsaid that Zaev was singing a rather different tune prior to the referendum, assuring that “citizens will make the decision,” and that Parliament would vote on the necessary constitutional changes only if the referendum is successful. But that was then, when confidence was still high that the usual combination of Western pressure, money and overwhelming domination of the media spectrum would get the job done. And then reality struck on September 30…

Still, amidst all the faux cheer and public displays of confidence of the pro-NATO/EU crowd, a palpable sense of unease hangs in the air. As a Deutsche Welle opinion piece put it, the “low voter turnout for Macedonia’s referendum is a bad starting point for the country’s future development.” And, according to DW in Serbian, a Frankfurter Allgemeine Zeitung commentary warned that “politicians who otherwise ceaselessly talk of democracy as a ‘special value’ should not call on the parliament in Skopje to accept the voting results.” In other words, Macedonia’s people (read – a large majority of the majority Slavic population) have “voted with their feet” and rejected the agreement, and no new parliamentary election, no matter the results, can change that unpleasant-but-immutable fact. That alone will delegitimize any Western-led effort to “manufacture consent” by ramming the agreement through the present or future Parliament – although, as we know, NATO doesn’t put too much stock in referenda anyway, while the EU is not averse to making citizens vote as many times as needed to obtain the “right” result.

But the West has lost more than just legitimacy in Macedonia – it has damaged its reputation, perhaps irretrievably. In the words of former presidential advisor Cvetin Chilimanov, “The West has humiliated us… Macedonians have rejected this media, psychological, political and propaganda aggression against the people, and that’s the tragedy of these days, that a large percentage of a people that had been genuinely oriented towards the West has changed its mind and stopped looking at the West as something democratic, something progressive and successful… That is the reason for the boycott. Pressure was applied against Macedonia, a country that had always been open to ties with the West, but which did not want to make this disgusting compromise and humiliate itself before the neighboring countries, before Western countries. We did not understand why that humiliation was needed so that we might become a member of Europe. What’s worst, perhaps that is now the thinking of a silent majority of the people, that they won’t forget this insult and this attack on Macedonia.”