Africans banned from America? Trump takes anti-immigrant racism to the next level 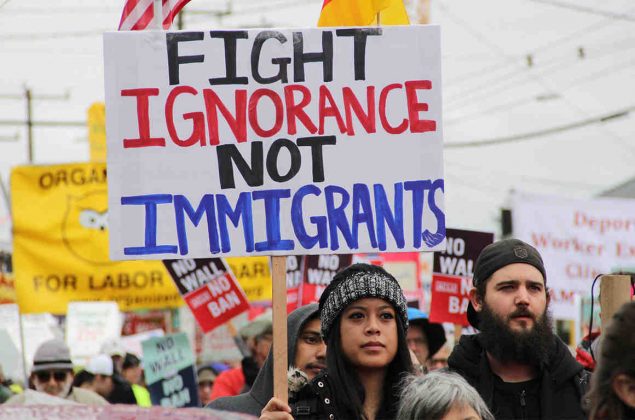 When this piece is read in conjunction with Objections to Jamaica deportation flight from UK ignored despite Windrush warning, posted just last week, it’s a stark reminder of how deeply xenophobic, racist and white supremacist the Trump and Johnson administrations are.

The administration’s security rationale for its latest red tape on travel from African and Asian countries doesn’t ring true.

On Friday, with Americans focused on President Trump’s impeachment trial, the coronavirus and the upcoming Iowa caucuses, the Trump administration announced it was adding six more countries to the list of those whose citizens face travel restrictions to the United States. The given reason was that those nations were not sufficiently screening people who sought to come to America.

The six countries affected when the travel ban takes effect on Feb. 22 are Sudan, Tanzania, Eritrea, Myanmar, Kyrgyzstan and Nigeria. All have sizable, if not majority, Muslim populations — in Myanmar’s case, Muslims are a minority that is severely repressed. According to the acting secretary of homeland security, Chad Wolf, these countries fell short in new vetting criteria for “terrorists and criminals attempting to enter the United States.”

The restrictions differ — Sudan and Tanzania are barred from the “diversity visa” lottery, while the other countries face a suspension of entry for immigrants. Travel for tourism and reasons other than immigration remains open — a curious gap if the purpose of the restrictions is to keep out potential terrorists.

It may be that the countries do somehow fall short in vetting would-be emigrants. And since the conservative-controlled Supreme Court upheld Mr. Trump’s ban on travel from several predominantly Muslim countries — Iran, Libya, Syria, Yemen, Somalia and Chad (later removed from the list) — as well as Venezuela and North Korea in June 2018, the new ban would most likely survive legal challenge. But it doesn’t take a lot of intuition to guess that security is not foremost on the president’s mind.

Blocking the immigration of people of color, Muslims or non-English speakers has been among the most frequent of Mr. Trump’s pitches to his base, and the timing for a new ban was propitious. It was the third anniversary of his first travel ban, the impeachment drama was sputtering to an end and the starting gun for the 2020 election season was about to go off in Iowa (or, as it happened, to pathetically misfire). With all the Democratic candidates opposed to Mr. Trump’s immigration policies, what better time to remind his followers that Mr. Trump was still standing guard at the gates?

Yet the latest ban makes as little sense as the first one, and it stands to do far more harm than good. A 2018 study by the libertarian Cato Institute found that the Trump administration’s “extreme vetting” of travelers and immigrants, of which the travel ban is a centerpiece, would not significantly reduce the already minuscule risk of imported terrorism achieved by visa reforms after 9/11, but would come at exponentially greater cost. The risk of any American being killed in the United States by a refugee or immigrant is negligible, Cato found.

Apart from the cruelty of barring thousands of family reunifications, the new restrictions could actually hurt the American economy. The ban is certain to strain relations with the newly listed countries. Five of them, including Nigeria, which has Africa’s largest economy, are being avidly courted by China as part of its “Belt and Road Initiative,” and could well conclude that China is a more trustworthy and predictable partner than the United States.

Adding ignorance to insult, Mr. Trump has consistently misrepresented the diversity lottery program, from which he is now excluding Sudan and Tanzania, as a means for poor countries to dump people they don’t want on the United States. In fact, the Diversity Immigrant Visa Program is administered by the State Department to increase immigration from countries with low rates of immigration, and candidates must have at least the equivalent of a high school diploma or two years of work experience to qualify.

The veneer of process and rationale over the latest travel ban cannot conceal its fundamental malice.