One hundred years ago this week on November 7, soviets – the Russian word for councils – of workers and peasants completed the overthrow of that country’s oppressive imperial regime. They had a dream. They imagined that the vast majority of humanity which had toiled thousands of years under the rule of kings, pharaohs, emperors, slavemasters and now capitalist robber barons could build for themselves, could rule themselves, could educate and empower themselves and provide to dignity, respect and a better life for all. 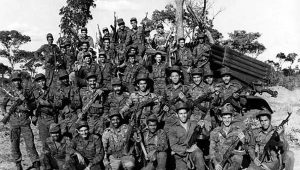 The first world war had bled European imperial powers dry and fatally weakened the imperial regime in Russia. The workers and peasants seized the moment and overthrew the regime and went on to found a new project of human liberation they called the USSR, the Union of Soviet Socialist Republics. It was the first time since the Haitian revolution more than a century earlier that a national government had been formed around a dream of radical emancipation and empowerment.

Britain, France, Japan, the U.S. and other powers sent troops and arms to, as Winston Churchill put it, “strangle Bolshevism in its cradle”. The imperialists obliged the infant USSR to fight a bloody civil war, from which the new USSR emerged destitute and starving but independent. Ultimately their project was both a success and a failure; or more accurately, many failures, many successes and many libraries of lessons, all bought at incalculable cost.

The entire world owes the USSR a great debt for thwarting the Nazi dream of conquering and dominating the Eurasian land mass, and the planet. Something like 80 per cent of the Nazi war effort was thrown against the USSR, not against Britain and the U.S., as we are taught here.

Africans and the African diaspora though, owe a particular debt to the October Revolution. Without the existence of and assistance from the Soviet Union, the struggle to throw off the colonial domination of the Western powers and to defeat apartheid in the southern quarter of Africa would certainly have been longer, more difficult and bloodier.

The October Revolution didn’t make the Soviet Union angels or saviors in Africa. The echoes of Soviet commitment to the radical and revolutionary visions of its founders did, however, oblige the USSR to side with colonial peoples of Asia, Africa and Latin America and against the European powers who ruled 95 per cent of African continent. The USSR also armed and protected the Cuban Revolution from being strangled in its cradle by the U.S., only 90 miles away.

Africans around the world ought to ask themselves how Africa might have fared the last hundred years had the October Revolution of 1917 never happened.

For decades, the USSR provided safe haven and education for African and Asian anti-colonial activists. It gave diplomatic and other support, up to and including military training and arms, for African liberation movements.

The USSR and later China, operating from the same motives, offered trade, infrastructure and technology deals to postcolonial African governments at far less onerous terms than those of Europe and the U.S. Without a Soviet Union, the colonial powers would have enjoyed a far freer and far bloodier hand for many more years than they did.

As late as the 1970s, the southern quarter of Africa was under the brutal apartheid rule of Portugal in Guinea Bissau, Angola and Mozambique; Zimbabwe was ruled by the rabid racists of British Rhodesia; and Namibia and South Africa itself was home to some of the most ardent and heavily armed white supremacists on earth, all armed, financed and diplomatically backed by the U.S. and the West.

It was Cuba, an island in the Americas populated in large part by the descendants of enslaved Africans – a Cuba entirely armed and heavily subsidized for decades by the USSR – which sent its sons and daughter back across the Atlantic to fight the South African army and U.S. puppet forces in the 1970s and 80s. Not a single African country sent a single man with a stick to fight the Boers who ruled South Africa. But by 1987, the entire Soviet-built Cuban air force,much of its Soviet-supplied armor and more than 60,000 Cuban troops were deployed to fight alongside the Angolans and others knocking the South Africans out of the skies and stalemating their ground forces who were equipped with battlefield nukes the U.S. and Israel helped them develop and deploy. The Cuban victory at Cuito Canavale in 1988 was the impetus for freeing Nelson Mandela and the negotiated dissolution of South Africa’s criminal apartheid government.

Without the Cuban military intervention, the death of apartheid would have been longer, bloodier and costlier. Without a Soviet Union, without the October Revolution of 1917, the U.S. would have crushed and re-subjugated Cuba almost immediately after its overthrow of Yankee rule in 1959.

The Soviet Union itself was dissolved a quarter century ago. The radical, emancipatory dreams of its founding generation were partially realized, partially betrayed. Its historic lessons are still present to enable and inspire today’s world – the African world in particular. It’s not the history we were taught. But it’s the history that is.