By Neil Clark, published on the ‘Op Edge’ commentary feature on RT.com, June 4, 2017 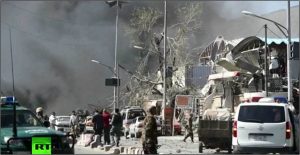 Sixteen years after ‘Operation Enduring Freedom’ first kicked off, Afghanistan, much like Libya and Iraq, the sites of other U.S.-led ‘interventions,’ is in flames.

The string of violence in this Central Asian hotspot of late is breathtaking: On May 31, a truck bomb detonated near the German Embassy in Kabul and killed nearly 100 people. On June 3 [local time], at least seven people were killed and over a hundred wounded in three separate explosions during a funeral in the Afghan capital. This follows deadly attacks the previous week across the country in which over fifty people lost their lives.

Afghanistan, lest we forget, is where the post 9/11 U.S.-led ‘war on terror’ began to great fanfare in late 2001. The country had to be invaded to make Western civilians safe. It was our moral duty to invade and set the country on the ‘right’ path. 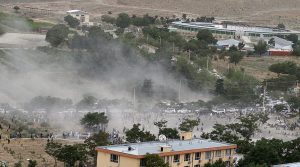 Terrorist bombing of funeral in Kabul, Afghanistan on June 3, 2017 (Reuters)

‘Victory’ was declared in November 2001 as the U.S.-backed Northern Alliance captured Kabul. In December of that year, British Prime Minister Tony Blair hailed the fall of Kandahar, the last Taliban stronghold. But in 2003, as the neo-con hawks in Britain and the U.S. focused on fighting secular Iraq – which was falsely accused of possessing WMDs – the Taliban fight back began. The conflict since then has ebbed and flowed.

NATO powers have at various times increased troop numbers, then pulled out, or announced withdrawals and postponed them, and then later redeployed forces. Today, the Taliban, whose defeat was being toasted in late 2001, either have control of or a significant foothold in around 30-50 per cent  of the country.

And for what? This is the question British and U.S. taxpayers reeling from cuts to vital public services at home ought to be asking.

The security risk to civilians in the UK and elsewhere has got much worse since 2001 with this weekend’s horrific attacks in London only the latest example. Not only do the Taliban control their largest share of territory in Afghanistan since 2001, ISIS and al-Qaeda also have significant presence there too. Remember all that talk from George W. Bush and Company of there being no ‘safe havens’ for terrorists? Thanks to U.S. foreign policy there are now plenty.

Much was made by NATO-propagandists of the so-called “train, advise and assist” mission. We would withdraw forces and help the Afghans ‘do it themselves’. Just how cool was that? Yet last week’s blast occurred in the diplomatic quarter of Kabul which was thought to be one of the safest areas of the city. Were those providing security there trained by NATO? If so, what sort of training were they given? Again, these are questions that need to be asked. No wonder Kabul citizens are angry.

It’s likely the recent spike in violence will see an increase in foreign military involvement in Afghanistan. There are around 13,000 international troops there already, including 8,400 Americans, supporting the Afghan government. We’re told that U.S. President Donald Trump is weighing up a ‘troop surge’. But how many would be needed to push back the Taliban and deal with the Islamic State? And aren’t we just going round in circles here?

To take attention away from NATO’s failures, Russia has been repeatedly accused of “supporting the Taliban”. There’s zero evidence of this. But what we do know is that the U.S. and allies did back the Mujahideen which the Taliban grew out of when Soviet troops were in Afghanistan supporting the left-wing government in the 1980s. As I detailed here, the aim of Zbigniew Brezinski, President Carter’s National Security Adviser, was to make the Soviet Union “bleed”. In fact, Afghanistan has known nothing but violence since Zbig decided to give the Soviets their own Vietnam by backing Islamist ‘freedom fighters’.

Back in the 1980s, the U.S. did all they could to prevent diplomatic solutions to the Afghan conflict. And it’s the same today. Which begs the question: is the U.S.’s Afghanistan policy really a failure, or is keeping the fire going there actually the plan? Either the U.S. and its allies have been spectacularly stupid, or there’s a more sinister game afoot.

In his book, Divide and Ruin, fellow Op-Edge contributor Dan Glazebrook argues that the new imperial strategy is not about Washington replacing one ‘regime’ for another but making sure strategically important nations remain devastated by war and can never again function as independent actors. If the war in Afghanistan ended, then the government there would inevitably pivot towards Russia and China. But by keeping the hostilities going and the country permanently destabilized, the Afghans’ military dependence on the West is maintained.

This could explain why every time the U.S. has had the Taliban on the run, the radical Islamist force has been allowed to regroup. Then when it gets too strong, it goes back in. And, when there’s been a chance to get people round the negotiating table, the U.S. has sent in the drones or captured leaders who might talk peace.

If you think it’s all a bit conspiratorial, then it’s worth bearing in mind the words of Hamid Karzai, the former Mujahideen fundraiser, who came to power with U.S. support following Operation Enduring Freedom in 2001. In his farewell speech as President in 2014, Karzai blamed the U.S. for the fact that his country was still at war. “Today, I tell you again that the war in Afghanistan is not our war, but imposed on us and we are the victims,” Karzai said. “One of the reasons was that the Americans did not want peace because they had their own agenda and objectives.”

Karzai’s spill-the-beans speech should have made front page headlines across the word. But guess what? It didn’t.

The question we need to ask as the cycle of violence continues is ‘cui bono?’ [Who benefits?] The U.S. defense industry and associated war profiteers have done very well out of Afghanistan. The people of the country and those caught in the terrorist blowback, much less so.

Also by Neil Clark on RT:
World in flames – the deadly legacy of Cold War warrior Brzezinski, RT.com, May 29, 2017

Unless the confusion about the Taliban being brothers who need to be spoken to or enemies and terrorists to be wiped out, it will be hard to fight various groups in Afghanistan, despite U.S. desire to send more troops, says military analyst Kamal Alam.

Three explosions hit a funeral ceremony in the Afghan capital, Kabul on Saturday, June 3 with up to 20 people killed and 87 injured, continuing a string of violence that has plagued this Central Asian country of late. According to Chief Executive of the Islamic Republic of Afghanistan, Abdullah Abdullah, who was among other government officials at the funeral at the time of the explosions, but was unharmed, the attack was a suicide bombing.

Saturday’s blasts happened at the funeral of a man who had died at a rally just the day before.

RT: Chief executive Abdullah Abdullah and other leading officials were also at the funeral. What does it say about the country’s security that such attacks can take place?

Kamal Alam: It is quite worrying, the last week there have been a dizzying amount of attacks and especially this one which comes just a few days after the big attack which killed almost 100 people… It just shows that the security services of Afghanistan are actually deeply penetrated by all kinds of groups, whether it is ISIS or Taliban or Haqqani network, or whatever name you want to give them. It is a very worrying situation. The Afghan National Security Forces are not up to the task of fighting the many various groups in the country.

RT: The explosions happened at the funeral of a man killed in June 2 protests, which were against a terror attack on May 31. Do you think all this will only deepen public outrage?

KA: It does because the Afghan government has been held to account. It is called the National Unity Government, but in fact there is not much unity between them. Dr. Abdullah Abdullah does not get along with the Afghan president Ashraf Ghani. There is no proper strategy on how to take on the Taliban. President Ghani several days ago said that the Taliban are brothers who need to be spoken to. Yet, you’ve got the Afghan intelligence who thinks the Taliban are enemies and terrorists. So, unless the confusion is wiped out, it will be very hard to fight these various groups that are in Afghanistan.

RT: The U.S. has played the role of stability guarantor in the Afghan conflict. Where does this wave of terror leave them?

KA: I think quite confused because if you look at the U.S.-led war, it has changed over the last 10 years. It started off as counter-terrorism, then it became counter-narcotics, then it became counter-insurgency, then it became nation-building and now they don’t quite know what it is at because Trump wants to send more troops. But 3,000 troops is not going to help when the U.S. had more than 100,000 troops, they still couldn’t control Afghanistan. So, I think there is deep confusion in the U.S. as well as anger because President Trump called this war ‘wasteful and the U.S. needs to pull out,’ but since he has been in office, it seems like he is doing the opposite of what he promised…

The question is how long will the Americans stay in Afghanistan without results aside from failure?

Related news:
20 killed in three suicide bombings in Kabul on June 3, including at funeral of earlier bombing victim, RT, June 3, 2017 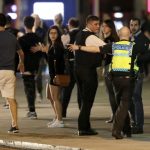 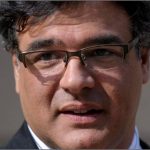