‘Inhumane ideologies sooner or later collapse’: Address of the head of the Donetsk People’ Republic, Aleksandr Zakharchenko, on the occasion of the Day of Liberation of Ukraine from Nazi Invaders, October 28, 2015

This speech was originally published in Russian on the official website of the Donetsk People’s Republic. Translation by New Cold War.org. 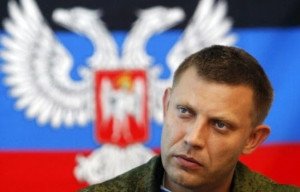 Today, Ukraine is celebrating the anniversary of its liberation from Nazi invaders, but it isn’t a real feast day anymore. There is nothing to celebrate when those who were chased from Ukraine more than 70 years ago have come back and are sitting in office in the centre of Kiev.

When this holiday was established officially, it was said that Liberation Day should become a day of unity for Ukraine.[1] However, under the ruling elite that came to power through a military coup [in Feb. 2014], this holiday divides the people of Ukraine instead of uniting them.

The worst thing is that the power holders in Kyiv are carrying out this division with their own hands. The victory of the Soviet people in the Great Patriotic War is impugned by the authorities in Kyiv. Soviet commanders Zhukov and Vatutin are not heroes for Ukraine anymore; the official heroes of modern Ukraine are now Bandera and Shukhevych, criminals who were defeated along with the Nazis.[2]

Today, like more than 70 years ago, torchlight processions of neo-Nazis are marching in the streets of Kyiv. Monuments to heroes of the Great Patriotic War are being demolished and monuments to Nazi collaborators are being installed.

Such policy of historical revisionism led to the split in Ukrainian society and to civil war.

In essence, our war is the continuation of the Great Patriotic War. I don’t know what the Americans fight for on Ukrainian land, but we, on our own land, fight for its ultimate liberation from the descendants and epigones of Nazi infection! The bacilli of this disease remained on the Ukrainian land after that Great War and have sprouted again, fed by greedy and unscrupulous politicians and oligarchs. Our goal, our responsibility to our grandfathers and great-grandfathers, is to root these weeds out once and for all. And we will do it!

I believe that the Ukrainian people, too, will overcome fear through which the current masters in Kyiv rule them. Ukrainians will wake up and bring the country back to the road to unification and creativity, not the road to decay and destruction. Then, 28 October may be celebrated as a double holiday–the Day of Liberation from Nazi invaders in 1944 and the Day of Liberation from the Bandera revanchists of today. It will happen, because such is the logic of history. Inhumane regimes and ideologies sooner or later collapse and posterity condemns them.

Our grandfathers and great-grand-fathers led us by example. Zhukov and Vatutin must be guides for us and our children, not Bandera and Shukhevych!

Notes by New Cold War.org:
[1] Beginning in 2009, October 28 is a state holiday in Ukraine: Day of Liberation of Ukraine from Nazi Invaders.

[2] Georgy Zhukov was a career officer in the Red Army of the Soviet Union and became deputy commander-in-chief during World War Two. He led the Red Army drive to liberate Eastern Europe and Germany itself from Nazi rule. He is the most decorated general officer in the history of the Soviet Union and Russia. He died in 1974.
General Nikolai Vatutin commanded Soviet troops in the liberation of Kiev from Nazi Germany occupiers in 1943. He died on April 15, 1944 when his entourage was ambushed by the Ukrainian Insurgent Army.
Editors’ Note: While we don’t necessarily share the views we publish on New Cold War, we do attempt to provide readers with a range of views. This is because your right to make your own mind up depends on your being fully informed.
Share
Tweet
Share
Pin