A trap set for Turkey in the Middle East 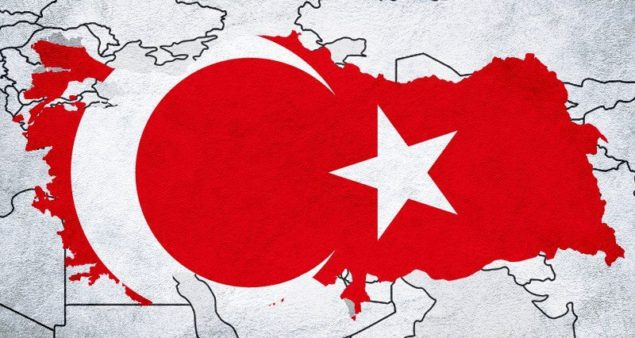 Attempts to encircle Turkey from North Africa, the Middle East and the Eastern Mediterranean are gaining more momentum. It is useful to take a look at the events that have been taking place in Libya, Tunisia, Lebanon, and Egypt, in order to see the full picture.

Further reading: The trap being set for Turkey in the Eastern Mediterranean; The Tunisian rift: US’ gateway into Libya

Attempts to encircle Turkey from North Africa, the Middle East and the Eastern Mediterranean are gaining more momentum. It is useful to take a look at the events that have been taking place in Libya, Tunisia, Lebanon, and Egypt, in order to see the full picture.

In Libya, where tensions have recently been at a high, the French have come up with a new anti-Turkish action.

The anti-Turkish provocations of Bernard Henri Lévy, who was advertised to the world as a “philosopher” associated with the French and the Israeli intelligence, which began on July 26 with the visit to the territory controlled by the Government of National Accord (GNA), have now reached a whole new level.

Paris is preparing to send its special forces under the command of the General Staff, known as the Commandement des opérations spéciales (COS), to Libya to contact GNA executives. Some reports from France and Libya suggest that the plan has already been initiated.

Founded in 1992 under the French Army, the COS operates in the field of intelligence gathering as well as conduct special operations for the national interests of France from Africa to Central Asia.

At this point, it will be useful to summarize the main objectives of Lévy’s visit to Libya and the French intelligence officers attempt to make a contact with the GNA;

1. To pursue a politics of balance in Libya by connecting with the GNA in case Haftar loses the war,

2. To break up the political unity by creating cracks within the GNA

3. To undermine the alliance by creating a suspicion and distrust between the GNA and Turkey.

The US promotes continuous instability

Not only France is moving to take the control of GNA in Libya, the United States is doing the same. It is clear that Washington is trying to limit the Turkish influence on the GNA. On the other hand, the US continues its support for the Haftar forces.

1. To keep the instability in Libya, and in this way, to keep it suitable for a military intervention,

2. To maintain the political clash between Turkey and Egypt,

3. To keep Turkey busy with the problems in Libya, thus weakening it from the other fronts, such as in Syria and in Iraq.

Tunisia is another country where the US-France axis’ anti-Turkish actions have recently accelerated.

In Tunisia, the country where the 2011 Arab Spring uprisings first sparked, the era of coalition governments began with the country’s two most organized forces, the nationalist bloc, including names from the former regime and the army, and the Ennahda Movement, the Tunisian branch of Ikhwan.

This coalition, which has experienced different political tides at different times, eventually disintegrated last month. Ennahda members were removed from the cabinet before the Prime Minister resigned.

In the immediate aftermath of these events, Rached Ghannouchi, who served as the Speaker of the Assembly, was given an Interpellation and a confidence vote was made. Ghannouchi won the confidence vote by a very narrow margin.

As the rumors of a coup spread around the country, debates about the possibility of an early election have also come up.

When we look closely, we see that the US-France and the United Arab Emirates are stepping up to catalyze the disintegration of the coalition by supporting political figures and parties in the anti-Ennahda camp.

But at the same time, the same United States and France still continue to hold ties with Ennahda.

Turkey on the other hand, as is the case in the rest of the region, supports Ennahda, because of its affiliation to Ikhwan– however, it has made the mistake of not contacting other groups in the country.

If Ennahda is wiped off the Tunisian political scene tomorrow, it is clear that the Turkish policy of forming an alliance will not only weaken in Tunisia, but also in Libya and in the Eastern Mediterranean in general.

In other words, the time has come for Turkey to diversify its political alliances.

Turkey and the new period in Lebanon

Anti-government protests over the last couple months in Lebanon have moved to a new phase following the horrible explosion in Beirut, while signals of a government crisis, uprisings and most importantly a civil war, are becoming more apparent each day.

All major geopolitical forces are becoming more active in the region in the ensuing fight for influence, especially France. French President Macron’s visit to Beirut is evidence of this fact.

In Lebanon, France holds influence on the Christian groups, whereas the United States holds influence with Sunni political movements. On the other hand, it is known that the Gulf countries are active in the country through financial moves, while Israel is active with its intelligence force. The common goal for all of them is to eliminate Hezbollah and to weaken Iran’s presence in Lebanon.

Turkey has historically had an influence over the Sunni population in Lebanon. The crowd that cheered for Vice President Fuat Oktay and Foreign Minister Mevlut Cavusoglu in Beirut last week is proof of this.

A wide political zone has been opened between which Ankara can take new actions, cooperating with both Sunnis and Shiites, and even including anti-imperialist Christians in Lebanon, by siding with Tehran. Russia also has an influence over the Christian groups and can be important in such a coalition.

If the Ankara-Tehran-Moscow axis was to be activated in Lebanon, it would be much easier for Turkey to protect its interests in the Eastern Mediterranean by making a deal with Lebanon.

If Ankara fails to positively use its influence on Sunnis, then the US-Israel-Gulf line will intervene immediately to manipulate these groups.

Would Egypt resign the deal with Greece?

Egypt’s maritime agreement with Greece requires a broader explanation, but since I have addressed this issue in other articles over the past couple weeks, I will only briefly summarize;

The agreement between Cairo and Athens is null and void according to international law. As Foreign Minister Cavusoglu has stated, Turkey will do what is necessary on this issue, both on the field and at the negotiation table, to retain its rights.

However, there is one important point in this that needs to be addressed in the deal: in order for the agreement to be put into effect, the approval of the Egyptian and the Greek Presidents are required, following the approval of the both Parliaments.

As of yet, no clear date has been announced regarding when this agreement will be brought to the Egyptian Parliament.

Egyptian sources are suggesting that if some solid and transparent steps were taken by Ankara, particularly on the Ikhwan, this could lead to some changes in Egypt’s desire for this deal.

In this regard, President Erdogan’s announcement of some contacts being made between  intelligence agencies of both countries is very crucial.

Cairo is absolutely aware of the fact that the agreement with Greece will be harmful to its own interests… Turkey also does not want to lose Egypt.

Turkey is poised to make a huge difference if it takes the right diplomatic actions in the region in the coming days.

Onur Sinan Güzaltan was born in Istanbul in 1985. He had his Bachelors’s degree in Law, from the Paris-Est Créteil Val de Marne Universty /Paris XII and a Master’s degree in International and European Law.

He got his certificate of diploma equivalence at Galatasaray University. Later, he got a Master’s degree in International Trade Law, at the Institut de Droit des Affaires Internationales, founded jointly by the Sorbonne Universty and the Cairo Universty.

In this process, he had served as the Cairo representative for the Aydinlik Newspaper. He has several articles and television streams within the international press, in such as People’s Daily, Al Yaum, Al Ahram, Russia Today France, Al Youm Al Sabea. In addition to being the author of the Tanrı Bizi İster Mi?, a work that studies the 2011-2013 political period in Egypt, he had also contributed to the multi-author study titled Ortadoğu Çıkmazında Türkiye, with an article that focused on the Turkish-Egyptian relations. While currently working as a lawyer, he also writes a weekly column for Aydinlik Newspaper on the subject of international politics and geopolitics.