A third, one billion dollar aid handout to Ukraine up for approval in Washington 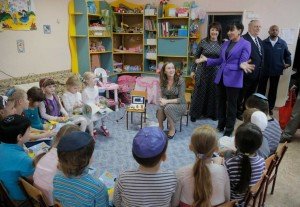 “This loan guarantee will provide further momentum for the ambitious political, economic, and anti-corruption reform efforts crucial to Ukraine’s long-term success,” he added.

His remarks come after Commerce Secretary Penny Pritzker, who is visiting Ukraine, said that the funding would be used to help bolster economic reform in the country.

Sen. Jeanne Shaheen (D-N.H.) added separately that the new loan guarantee will “send a message to the people of Ukraine that they have a partner in the United States as they continue to strengthen their economy and reform government institutions.”

Shaheen as well as three other Democratic senators visited Ukraine earlier this month where they met with government officials including Prime Minister Arseniy Yatsenyuk and President Petro Poroshenko.

The New Hampshire Democrat added that the trip allowed her to see “firsthand the resolve of Ukraine’s leaders to improve their economy, root out corruption and stand united against Russian aggression [sic].”

The administration provided the first $1 billion in loan guarantees to Ukraine last year amid a political crisis when former President Viktor Yanukovych was ousted from office and a growing military conflict escalated in eastern Ukraine with Russian-backed separatist fighters [sic]. A second loan guarantee was signed earlier this year.