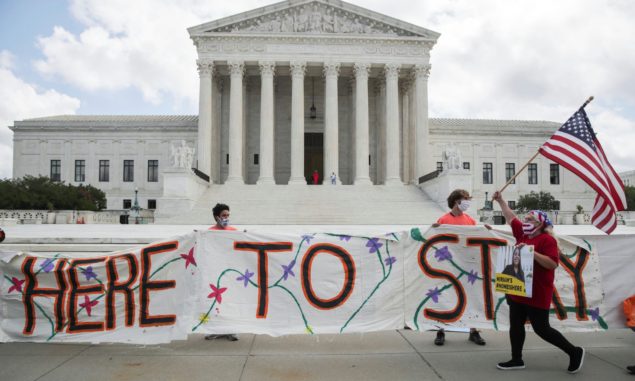 Daca recipients and supporters celebrate outside the US supreme court in Washington DC on 18 June.
Photograph: Jonathan Ernst/Reuters

Crowds cheered as Daca recipients, also known as Dreamers, descended arm-in-arm from the steps of the US supreme court on Thursday, after the justices determined Donald Trump’s 2017 decision to end the Deferred Action for Childhood Arrivals program (Daca) was unlawful.

Some wiped tears while others raised their fists. Elsewhere in Washington, on the floor of Congress, the New York Democrat and Senate minority leader, Chuck Schumer, delivered an emotional statement: “It gives you some faith that the laws, rules and mores of this country can be upheld.”

Daca allowed eligible immigrants who were brought to the US as undocumented minors to stay in the country with renewable protections from deportation and earn a work permit.

Although a majority of Dreamers are Latino, they represent a diverse array of young people brought from all over the world as children. In a statement, Cesar Vargas, New York state’s first undocumented attorney, said: “Dreamers can now breathe a sigh of relief.”

“We always knew this was close and we were proven right with the 5-4 decision,” he said, of the split vote between the nine justices that sit on the supreme court. “Now the Trump administration has to follow proper procedures to ensure that lives are not disrupted.”

The president and Republican leaders also reacted to the ruling. As news of the decision spread, the president shared tweets questioning the justices’ motivations before calling the decision “horrible [and] politically charged”.

“Do you get the impression that the supreme court doesn’t like me?” Trump later questioned on Twitter after graphically likening the decision to “shotgun blasts into the face” of conservatives.

Juan Escalante, a Daca recipient in Florida who was brought to the US from Venezuela at 11, insisted it was the president who made the issue political “by calling immigrants racist, murders and drug dealers”, he said, echoing Trump’s language from the campaign trail in the 2016 election.

While Escalante said he was “elated” about the ruling, he was also “hopeful” Trump would “step back and realize he lost”, as the court recognized the president had the power to end the Obama-era program and ruled against him on procedure, not principle.

“The supreme court saw his actions for exactly what they were – malicious and done unlawfully,” he said. “Had [the president] not tried to use Daca recipients as a punching bag to further his anti-immigration agenda, he wouldn’t have suffered this embarrassment.”

Still, Escalante recognized the fight was not over for broader immigration, claiming if Trump expects to be re-elected, “he needs to understand the majority of voters from both parties, and independents support it”.

For Jasiel López, a Daca recipient brought to the country from Mexico, the desire to permanently call the US home tempers the joy of Thursday’s ruling with a dose of reality.

“It’s all still temporary, even without the president’s interference” he said. “From our permits to our IDs, everything about Daca recipients living and working in the country we call home is still temporary and the supreme court’s decision doesn’t change that.”

Now an immigrant activist based in Chicago, López used to risk arrest and deportation by driving 45-minutes between Fort Lauderdale and Miami while an undocumented student – a task that could have made any day his last in the US.

But Daca allowed López to finish school, earn a job through a work permit and relocate to the midwest. While he said he was surprised by the supreme court’s decision, likening it to “a lucky bounce” of a basketball, he added that it just solidifies a continued fight for immigrant rights.

“The work of young people who gave us Daca is important, but we should not have to get to that point we rely on a single person or vote to bounce in our direction,” he said.

“I’m happy for every one of us who can breathe a little easier, but let’s remember there are those who aged out, or were otherwise ineligible. All 11 million of us should be able to call the country we love home, and permanently.”

Barack Obama, who first instituted Daca in 2012, congratulated Dreamers via Twitter on Thursday, saying he is “happy for them, their families, and all of us”.

“We may look different and come from everywhere, but what makes us American are our shared ideals,” he tweeted.

Obama insisted Americans must now stand up for Dreamers by electing former vice-president Joe Biden and a Democrat-controlled Congress to “create a system that’s truly worthy of this nation of immigrants once and for all”. 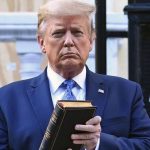 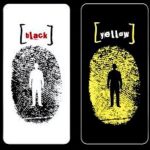