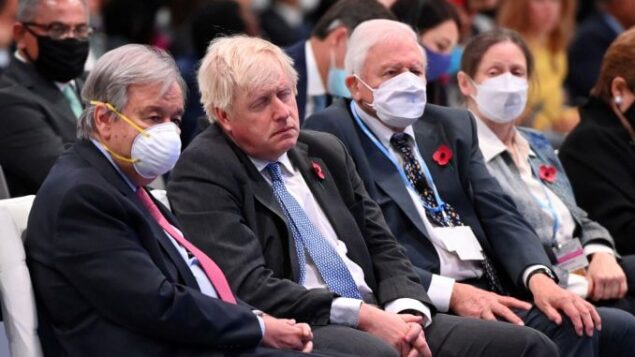 One of the most damning assessments of COP26, the UN climate conference being held in Glasgow, came from Greta Thunberg, the Swedish climate activist:

‘#COP26  has been named the must excluding COP ever.

This is no longer a climate conference.

This is a Global North greenwash festival.

A two week celebration of business as usual and blah blah blah.’

Juice Media, the campaign group who ‘make honest Government ads’, exposed the dangerous and misleading nonsense behind ‘Net Zero by 2050’:

‘There’s a huge gap between our promises and where we need to be. We don’t talk about that gap coz that would entail a complex process called “Being Honest”. Being Honest would mean admitting that we’re failing. And we can’t do that coz then we’d have to stop failing. That would mean ending fossil-fuel subsidies and banning all new gas, coal and oil projects.’

‘So being honest isn’t an option for us. Which is why we’ve come up with the next best alternative: Net Zero by 2050…which risks setting off irreversible chain reactions beyond our control.’

Nature, the leading science journal, reported last week that top climate scientists – co-authors of a report by the UN Intergovernmental Panel on Climate Change – are sceptical that nations will rein in global warming. Moreover:

‘Six in ten of the respondents [climate scientists] said that they expect the world to warm by at least 3 °C by the end of the century, compared with what conditions were like before the Industrial Revolution. That is far beyond the Paris agreement’s goal to limit warming to 1.5-2 °C.’

‘Most of the survey’s respondents – 88% – said they think global warming constitutes a “crisis”, and nearly as many said they expect to see catastrophic impacts of climate change in their lifetimes. Just under half said that global warming has caused them to reconsider major life decisions, such as where to live and whether to have children. More than 60% said that they experience anxiety, grief or other distress because of concerns over climate change.’

A powerful thread on Twitter by conservationist Stephen Barlow echoed our own experiences and insights from observing climate conferences over three decades:

‘I’m starting to get the impression of COP26 as a contrived stitch up. Where world leaders get to present their inadequate action as fixing the problem. This really is dangerous stuff. You see I remember the 1992 Rio Earth Summit well.’

‘After the 1992 Rio Earth Summit, political leaders, fossil fuel companies and general vested interest gave the impression the problem was fixed, that there was no need for people to turn to green politics, because mainstream politics had fixed the problem.

‘In the following years, in the 1990s, we had oil companies taking out big full page adverts in BBC Wildlife Magazine, National Geographic, etc, saying how they were switching their business model to renewables.

‘Politicians presented all these rosy views of green growth, all sorts of carbon trading schemes and generally giving off the impression that the problem was fixed, and the future was green.’

‘The problem is, unlike the 1992 Rio Earth Summit, where it took nearly 30 years to find out everything we were promised was a scam and it just kept on getting worse – in 30 years time (in fact far less) we are going to be in serious trouble.

‘This is as evil as it gets. This is an orchestrated PR scam to carry on with business as usual. Where various elements like politicians, the mainstream media, billionaires, royalty and vested interests, combine to maintain business as usual, with fraudulent presentation.’

Investigative journalist Nafeez Ahmed, who has repeatedly exposed the reality of UK foreign policy, recently reported that the British government is seeking trade deals with carbon-lobbying countries who have attempted to weaken a scientific assessment report being prepared by the IPCC. The countries include Saudi Arabia and the Organisation of Petroleum Exporting Countries, along with Brazil, Argentina, Japan, Norway and India. Indeed, the UK is actively seeking to promote increased fossil fuel production in nearly all those countries, including Saudi Arabia – the world’s second largest oil producer.

‘According to the UK Department for International Trade’s Exporting Guide to Saudi Arabia, some of the biggest opportunities for UK investment are in expanding the kingdom’s fossil fuel sector.’

‘There are significant opportunities in Saudi Arabia’s energy market for UK businesses, especially in oil and natural gas.’

‘Britain’s intent to ramp up fossil fuel production in partnership with some of the world’s biggest obstructers of climate action raises urgent questions about its role at COP26.’

That is an understatement. Then again, who believes that a corrupt Tory government – led by a shambling, elitist, racist, serial twister of the truth – would ever actually take the serious actions required to tackle the climate emergency?

‘As will become clear after COP26, our government has no intention of taking the necessary action to protect its people. It has broken the social contract – the unwritten agreement in which we agree to obey the government’s laws and in return it will protect us.’

‘have exposed the government’s refusal to act on home insulation as cowardly and vindictive and their refusal to protect our country and our children from the climate crisis as genocidal and treasonous.’

Those are strong words. But climate campaigners from Extinction Rebellion (XR) also made clear that:

‘Nothing on the table in the run up to COP26 has resembled a compassionate and functional response to the crisis. The Climate and Ecological Emergency is a Crime Against Humanity perpetrated by the rich and powerful, and the COP process is systematically corrupted by vested interests – national, corporate and financial.’

The environmentalist group Global Witness assessed that there are more fossil fuel lobbyists present at COP26 than even the largest delegation from any country. They reported:

‘At least 503 fossil fuel lobbyists, affiliated with some of the world’s biggest polluting oil and gas giants, have been granted access to COP26, flooding the Glasgow conference with corporate influence.’

On day 1 of the conference, XR had already declared that COP26 was a ‘failure’ and the conference itself ‘a crime against humanity’. XR spokesperson Jon Fuller pointed out the responsibility of the media to:

‘form an analysis of the situation, delving beyond presenting the views of different parties to the reality of what has been achieved and what the consequences are for ordinary people. If they fail to do so they continue to be guilty of the same crimes against humanity as the world leaders who have gathered at 25 previous COPs, claiming progress in spite of a complete failure to stop emissions rising.’

Of course, as Media Lens has demonstrated over the past two decades, the state-corporate media, including BBC News, are indeed complicit in crimes against humanity.

Last year, the BBC took £300,000 in advertising revenue from Saudi Arabia’s national oil company, Aramco. The BBC does not carry advertising in the UK, but it does so abroad where much of its output is supported by commercials.

‘Big fossil fuel companies have spent approximately $660,000 (£483,000) with the BBC on US-focused digital adverts since 2018, according to projections produced by the advertising data firm MediaRadar. Most of this came from the national Saudi oil company – although BP, Exelon and Phillips 66 are among the other fossil fuel business[es] estimated to have spent five-figure sums advertising on the BBC’s digital outlets.’

‘The real figure for how much the BBC is making from large fossil fuel companies could be much higher when other forms of advertising are taken into account.’

‘PM says score in the match btw humanity and climate change is now, 5-2, or 5-3, not 5-1 at half time, which was his assessment a few days ago – if you hate the metaphor, let’s say, progress, but not yet enough’

This tweet from the BBC political editor managed to capture both:

1. the pathetic state of the ‘democracy’ that ‘elected’ Boris Johnson as Prime Minister.

2. the crass, subservient nature of much of BBC News.

As US journalist Glenn Greenwald once observed:

‘The worst media in the democratic world is the British media, and it’s not even close.

‘I know it’s hard for people in other countries who hate their own media to believe, but whatever you hate about your country’s media, the UK media has in abundance and worse.’

The pathetic state of much of what passes for ‘journalism’ in the UK was summed up by investigative journalist Matt Kennard’s recent observation:

‘The British Journalism Awards [are] sponsored by Starling Bank, Gilead pharma, Google, Ovo Energy. The capture of our political, media and cultural systems by corporations is absolute and the root of problem. Rejecting + replacing corporate media is prerequisite to real democracy.’

And real democracy is a prerequisite for tackling the climate emergency before it threatens to engulf humanity, driving us towards extinction. 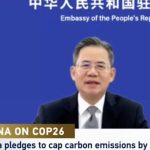 Carlos Martinez: US attempts to blame China for the climate crisis are hypocritical and ridiculousCarlos Martinez, China, COP26, Podcast, Videos and podcasts 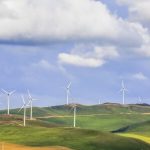