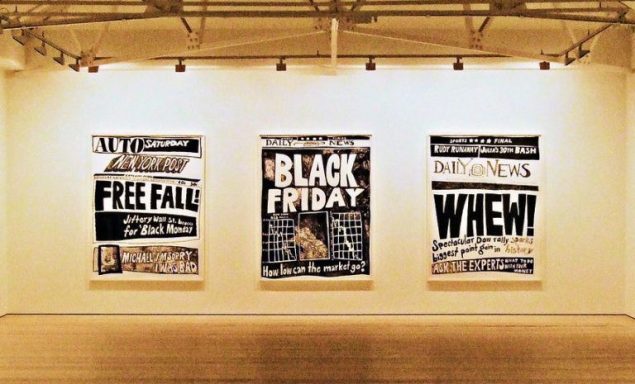 Even before the Covid-19 crisis has slashed stock prices nearly in half since it erupted in January, financial markets were in an inherently unstable condition.

Even before the Covid-19 crisis has slashed stock prices nearly in half since it erupted in January, financial markets were in an inherently unstable condition. Years of quantitative easing had loaded so much credit into stock and bond prices that stock price/earnings multiples were far too high and bond yields far too low by any normal and reasonable historical standards. Risk premiums have disappeared, with only a few basis points separating U.S. Treasury bills and corporate bonds.

The Fed’s Quantitative Easing since 2008, plus large companies using their earnings for stock buybacks, drove the prices of financial assets into a realm of unreality. The result was that markets already were teetering on the brink of fragility. Any rise of normal interest to more normal conditions, or any external shock, was bound to crash the artificial value at which financial markets were priced. The Fed’s policy was to perpetuate this situation for as long as possible, acting in effect as the Republican re-election team by pumping in yet more credit. But at near-zero interest rates, there was little that could be done.

A close parallel to this situation was the state of Third World debt in the mid-1980s. Mexico’s announcement that it could not meet its foreign debt service was the shock that brought ugly financial reality into conflict with the assumption that somehow any government debt could be paid – even debts denominated in a foreign currency.

The international financial system was rescued by the issue of Brady bonds – “good” new bonds for old “bad” ones. The capital value of these bonds was still far below the original debt, but they had the virtue of setting realistic levels by bringing the debt balance more in line with the actual ability of debtor countries to earn the dollars or other hard currencies needed to service these bonds.

The current crisis requires a similar wrote-down and recognition that fictitious price levels must give way to reality at some point. In fact, we have reached the end of an illusion – the illusion that bond (and stock) prices could be sustained indefinitely simply by financial engineering, without an economic base capable of producing enough surplus revenue to justify existing bond and stock prices.

So attractive were the former unrealistic bond and stock levels that the markets are still in the “denial phase” hoping that the Corona virus bailout may be used as an opportunity for yet further infusion of capital into the financial markets. But that merely postpones the inevitable adjustment to bring back financial asset prices in line with real economic capabilities.

There certainly is a financial panic, and prices are not necessarily more realistic in a panic then they were in the bubble leading up to it. The question is, what is a sustainable asset-price level? What needs to be supported is a realistic value of stocks and bonds. Bad debts should be taken off the books, not supported in an attempt to recover the unrealistic pre-virus levels.

A successful way of coping with overpriced bonds and other debts

This was the situation with Third World debt in the early 1980s after Mexico triggered the Latin American debt bomb by explaining that it did not have the money to service its foreign bonds. Prices for Third World bonds plummeted as investors calculated the dollar-earning power of countries that had to export goods and services (or sell off their assets) to pay their foreign-currency debts. But their export proceeds simply could not cover the debt service that was owed.

The Sovereign Debt market was trading at such low prices that these foreign government bonds had become illiquid. Unable to obtain further credit, countries confronted by this financial state of affairs were threatened with political instability.

That is not presently the state of the U.S. bond and stock market, thanks to the Federal Reserve’s long Quantitative Easing and support of the financial markets (euphemized as the Plunge Protection Team). This artificial life support aimed at saving banks and large companies, pension funds and state and local finance from insolvency. But in doing this the Fed was subsidizing illusory values that could not be sustained.

The reality is that large swaths of the remarkable expansion in the post 2008 corporate bond market boom have seen a proliferation of corporate bonds that cannot be paid. The economy’s shutdown makes all bond and stock prices “virtual prices,” as if they would be in the absence of a virus and debt crisis. The fracking industry is only the most visible example. Airlines, entertainment, hotels and retail companies are facing losses that threaten their solvency.

The Fed fears a free market when it comes to asset prices. Or at least, it fears the political and economic consequences of withdrawing artificial support. But reality overpowered the Fed’s mid-March intervention – until an even larger infusion was anticipated. Even before the Corona virus, markets were debt-strapped that even the announcement of $1.5 trillion in a day did not stem a steep DJIA sell-off.

In recent days the Fed “announced that it would buy corporate bonds, including the riskiest investment-grade debt, for the first time in its history.”[1]

This is the “Denial stage” of the grieving crisis over the loss of an illusion – the illusion that the stock and bond run-up could be turned from government manipulation into an actual market reality.

Where is this supposed to end? The Fed could buy up all the bonds – from corporate junk to state and municipal bonds as a way to prevent their prices from falling. At an extreme, this business-as-usual scenario would lead to the Fed owning the junk- bond market and a large swath of the stock market.

This could admittedly have a silver lining: having concentrated the debt in its own hands, the Fed would then have a free hand to write off the debt, privatize the companies and start all over again with a lower debt overhead. That is what China’s central bank has been doing: simply forgiving debt that is owed to itself. The Fed would swap “good” public debt (good in the sense that the government can print the money to pay) for bad (meaning unpayable) bonds and stocks.

Bringing financial markets in line with reality would mean writing off a large swath of corporate debt and realizing that much corporate equity “wealth” has been created by decapitalizing corporations in stock buybacks instead of investing in the country’s productive capacity, including decent wages for workers. The American airline industry over the last decade has spent as much as 96% of its cash on stock buybacks – giving financial wealth to their CEOs and shareholders rather than buying up real wealth in the economy. Such financial wealth, if not underpinned by real wealth, is built on quicksand, and it is now disappearing as all asset markets are plummeting. So stock buybacks and other artificial ways to ‘create wealth’ were “investments” that have had drastically negative returns.

To implement a rationalization of bond and stock prices bringing them in line with reality, it has to be in the interest of holders of these securities. Acknowledging that bonds are not worth as much as the price at which the Fed is supporting them will not appeal to bondholders as long as prices are artificially supported. A bond-swap (new good bonds for old bad bonds) can only be achieved in a situation where it is more realistic and less risky to have a sound good bond than a low-priced (or fictitiously high-priced) bad bond.

Therefore, the Fed should let prices sink to their “market” level sans interference.

The Fed is trying to support the unsupportable. By doing this, it has blocked a reasonable solution bringing financial asset prices in line with the realistic ability to carry debt.

Without the Fed’s support, bonds would need to be written down and stock prices continue to plunge. That would prepare the ground for something like the Brady Bond solution for Third World debts in the 1980s. Latin American and other Third World bonds were selling around 25 cents on the dollar in the wake of Mexico’s announcement that it could not pay its scheduled debt in 1982. There was widespread recognition that Latin American governments couldn’t pay their bonds. That was because these bonds were denominated in US dollars, and foreign governments can only print their own currency. When they did this to throw domestic money onto foreign exchange markets, their exchange rates plunged.[2]

Brady bonds addressed the problem by a swap of “good bonds for old.” The new bonds would receive IMF and other support, and were based on what foreign countries actually could pay in foreign exchange (mainly U.S. dollars). Bondholders could swap their old bonds, which were selling from 15 to 25 cents on the dollar, for new bonds priced higher than the market price but less than the original issue, but which at least were secure and less risky. They were “reality bonds.”

The government can organize something similar for corporate bonds after the market takes the artificial QE-added values out. However, to create a market environment for such an alternative, the Fed must let bonds and stocks fall to their natural “realistic” level recognizing that the existing debt overhead can’t be paid. Then, new “reality bonds” can be issued and the economy can start again with a non-crippling debt level.

Banks and major creditors would have to absorb much of the loss resulting from the runup of stock and bond prices to overvalued levels. But something similar was a feature of the Brady reforms, which called for burden sharing by banks (the London club) and also governments (the Paris club) who had to provide debt relief.

The alternative is that we will face reality without a solution.

[1] Jeanna Smialek, “The Fed Goes All In With Unlimited Bond-Buying Plan,” The New York Times, March 23, 2020. This report adds: “Because the Fed cannot take on substantial credit risk itself, the Treasury Department backs its emergency lending, using money from a fund that contains just $95 billion. Treasury Secretary Steven Mnuchin on Sunday suggested that the new money in the Republican bill could be leveraged by the Fed to back some $4 trillion in financing.”

[2] The situation was much like German reparations in the 1920s. (I have chapters in my Trade, Development and Foreign Debt on the German experience and subsequent IMF theories that were equally disastrous.

* Dirk Bezemer and Paul Craig Roberts provided much help in this article.

Michael Hudson is the author of Killing the Host (published in e-format by CounterPunch Books and in print by Islet). His new book is J is For Junk Economics.  He can be reached at [email protected]