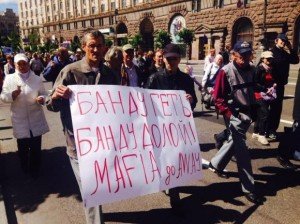 On Saturday, May 16, a rally took place in the center of the Ukrainian capital to protest against the increase of tariffs for public utilities. At 10 am, at least five thousand people took to the Khreshchatyk, which on weekends becomes a pedestrian zone.

Protesters carried posters with a variety of slogans: “Yatsenyuk=poverty in Ukraine” and Ukrainian government for Ukrainians”. People held national flags. The protesters were peaceful and did not shout.

According to the correspondent of Vesti, some people came from outlying regions and arrived by bus early in the morning.

The procession moved from Khreshchatyk Bessarabian market to the European area.

Protesters who gathered outside the Ukrainian parliament building in Kiev on Thursday [May 14] demanding the cabinet to decrease gas tariffs have announced that the rally will be “indefinite”.

The activists earlier said they planned to hold a protest for at least two days. “However, we have understood that single protests will hardly result in success,” the participants of the rally said.

The event was organized by the Anti-Maidan movement and the union for protection of entrepreneurs. Protesters hold posters “Ukrainian Gas for Ukrainians” and call on Prime Minister Arseniy Yatsenyuk to stop “stifling people.”

A guillotine, gallows and a golden radiator have been installed on an improvised stage on the square. The organizers of the event are playing a performance showing the people’s reaction to the rising tariffs.

Police have cordoned off the Verkhovna Rada building, but the rally is still peaceful.

Activists are due to later march to the government building. The activists of the so-called “financial Maidan” have joined them demanding the country’s national bank to pay back the money on deposits of the bankrupt banks and solve the problems of foreign currency loans. Many Ukrainians have taken out loans in dollars to buy flats when the US dollar was some three or four times cheaper than now.

Earlier on Thursday, the parliament approved a law allowing banks not to pay back deposits to the clients earlier than the fixed date.

What is more expensive in Ukraine on May 1, and by how much

May 1 this year is not only Labour Day, but also the day of the new tariffs. Tariffs increased today on cold and hot water, heat, mail and auto insurance.

The National Commission exercising the state regulation in the energy and utilities, decided to raise tariffs for heating, hot and cold water.

Utilities tariffs will rise by an average of 67%

The fee for heating, both now and from May 1, will be charged only in the cold season.

Rates on cold water will rise depending on the region. The maximum tariffs for water will be established in Kiev, Kirovograd and Zakarpattya regions – from 10 UAH per cu. m in the capital – from 6 to 8 UAH per cu. m, and the lowest – in Vinnitsa and Donetsk region. – 4 to 6 USD per cubic meter. m.

Postal services have increased in price

Since May 1, 19.5% more expensive, and mail. Growth rates will extend to sending written correspondence within Ukraine, in particular the shipment of simple post cards, letters, packages and parcels recommended.

As explained in the National Commission for regulation in the field of communication and information, the cause of the increase in postal tariffs is the increase in cost of services, such as rising prices for fuel and lubricants, electricity, rents and so on.

Policies will rise in price, and compensation in case of accident will remain the same

Since May 1, motorists will have to fork over a 25% rise in price policies of obligatory civil liability insurance for drivers. The reason – inflation.

The highest rises will be in Kiev – for them the policy on vehicles with engine capacity of 1.6 liters will rise from 1020 to 1296 UAH. And the cheapest insurance policy – for the same car, registered in the district center, will rise in price from 316 to 405 UAH.

The coverage for someone injured in an accident due to the fault of the insured will remain the same: 50 thousand UAH. For “iron”, up to 100 thousand UAH – for health damage of the victim. 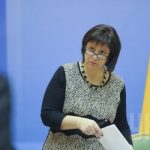