Kyiv police are investigating possible foul play after Andrey Doroshenko, a prominent and critical political analyst in Ukraine, fell to his death on April 24 from the ninth floor of a building near to his home. 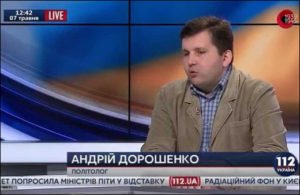 Andrey Doroshenko fell to his death in Kyiv on April 24, 2016

Doroshenko is known for his calls for a peaceful resolution of the conflict in eastern Ukraine. He had branded recent political turmoil in Kyiv “a plot by oligarchs.”

Andrey Doroshenko was an independent political consultant and a regular guest on Ukrainian political talk shows. His body was found on Sunday in a street in the eastern part of the capital. He apparently fell from the window of a stairway landing in a nearby house, located about five minutes’ walk from his home, Ukrainian media reported.

The police are treating the 40-year-old’s death as suspicious and are investigating it as a possible murder. He died a few weeks after his home was robbed, his neighbors told journalists. No apparent reason why he would commit suicide was immediately reported.

The expert was a regular on Ukrainian TV political talk shows and panels. Among other things, in his latest interviews he had called for internationally-backed peace talks between Kiev and rebel forces in the east, similar to how the 1995 Dayton Agreement put an end to one of the Yugoslav wars. He also accused Ukrainian oligarchs of stage-managing the latest political crisis in the country through MPs they sponsor.

In the past, Doroshenko worked as an aide to Taras Chornovil, a then-MP from the Party of Regions of the ousted Ukrainian President Viktor Yanukovich. His latest work involved improving ties with Arab nations such as Algeria and Morocco.

Some sources linked Doroshenko with prominent Ukrainian politician Viktor Medvedchuk, who has served as a mediator between Kiev and the rebels. Critics accuse Medvedchuk of being pro-Russian and of sponsoring the rebels.

Doroshenko’s death is the latest in a string of similar incidents in post-coup Ukraine.

In March, Yuri Grabovsky, the lawyer of a Russian citizen who was accused of waging an aggressive war in Ukraine, was kidnapped and brutally killed by two perpetrators, according to Ukrainian military prosecutors. His client has since been convicted and sentenced to 14 years in prison.

Last year in April, prominent opposition journalist and writer Oles Buzina was killed near his home in Kiev. The suspects in the murder, who are Ukrainian nationalists with close ties to the notorious Right Sector group, are being held under house arrest. 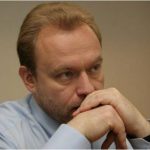