A week ago, amidst Turkish shelling of Kurdish positions in Syria and talk of a Turkish invasion, the Russians proposed a resolution to the UN Security Council reaffirming Syria’s sovereignty. The resolution was blocked by the U.S. and its allies.

The fact the U.S. acted to block a UN Security Council Resolution that simply reaffirmed Syria’s sovereignty provoked widespread comment and incredulity. The reality is that it would have been politically impossible for the U.S. to allow a Resolution to pass the UN Security Council that is critical – however implicitly – of Turkey, which is the U.S.’s NATO ally.

The Russians undoubtedly knew this when they proposed the resolution. As I said last week on RT’s Crosstalk programme, in proposing the resolution the Russians were simply putting a marker down, in effect engaging in a diplomatic play as they worked towards the UN Security Council resolution they knew was coming.

That resolution duly came in the form of Resolution 2268, which was passed by the UN Security Council on 26th February 2016. Not only did the U.S. not veto this resolution, it supported it together with Russia.

The preamble to resolution 2268 (full text below) in effect does precisely what the rejected draft resolution Russia put forward to the UN Security Council sought to do. It reaffirms Syria’s sovereignty. To be precise, its exact words say that the UN Security Council reaffirms its “strong commitment to the sovereignty, independence, unity and territorial integrity of the Syrian Arab Republic, and to the purposes and principles of the Charter of the United Nations…”

By proposing the previous draft resolution, the Russians were increasing the pressure on the U.S. in the negotiations that were under way. They were pointing out that it is the U.S.’s own ally Turkey which by its actions is destabilising the situation in Syria. They have also ensured that all parties now know that Russia considers the preamble of Resolution 2268 as confirming that the action Turkey has been taking in Syria is illegal under international law since it is prohibited by the Charter of the United Nations.

This whole story of the two Rrsolutions – the one which was rejected and the one which has passed – is in fact a further case study of the way in which the Russians conduct diplomacy. They rarely aim for a single breakthrough. Rather, what they do is take a series of incremental steps, each one of which brings them closer to their goal. Whilst each step may be minor by itself, as they accumulate they give Russia an overwhelming advantage. This is the strategy Russia has followed since the start of the Syrian crisis in 2011, and it is now bearing fruit.

In this case, throughout all the discussions in the UN Security Council over their draft resolution, the Russians were simultaneously negotiating with the U.S. the terms of the “cessation of hostilities” agreement, which Resolution 2268 has now put into effect. That makes the “cessation of hostilies” agreement – which is strictly speaking just an agreement between the US and Russia – legally binding on all the parties to the conflict (including Turkey) by making it a part of international law.

The previous draft Resolution the Russians proposed was not intended to be passed. It was intended to put them in a stronger position in their negotiations with the U.S., whilst enabling them to define the outcome of those negotiations in their favour.

This is the full text of UN Security Council Resolution 2268:

Reaffirming its strong commitment to the sovereignty, independence, unity and territorial integrity of the Syrian Arab Republic, and to the purposes and principles of the Charter of the United Nations,

Recognizing the efforts of the Secretary-General in implementing resolution 2254 (2015) and noting, through his good offices and by his Special Envoy for Syria, the launch of the formal negotiations on a political transition process, consistent with paragraph 2 of resolution 2254 (2015), on 29 January 2016,

Commending the commitment of the International Syria Support Group (ISSG) to ensure a Syrian-led and Syrian-owned political transition based on the Geneva communiqué of 30 June 2012 in its entirety and to immediately facilitate the full implementation of resolution 2254 (2015), and emphasizing the urgency for all parties in Syria to work diligently and constructively towards this goal,

Welcoming the ISSG statement of 11 February 2016, including the establishment of an ISSG humanitarian task force and an ISSG ceasefire task force,

2.   Demands the full and immediate implementation of resolution 2254 (2015) to facilitate a Syrian-led and Syrian-owned political transition, in accordance with the Geneva communiqué as set forth in the ISSG Statements, in order to end the conflict in Syria, and stresses again that the Syrian people will decide the future of Syria;

8.   Welcomes the cessation of hostilities as a step towards a lasting ceasefire and reaffirms the close linkage between a ceasefire and a parallel political process, pursuant to the 2012 Geneva communiqué, and that both initiatives should move ahead expeditiously as expressed in resolution 2254 (2015);

9.   Calls on all states to use their influence with the Government of Syria and the Syrian opposition to advance the peace process, confidence-building measures, including the early release of any arbitrarily detained persons, particularly women and children, and implementation of the cessation of hostilities;

11.  Decides to remain actively seized of the matter. 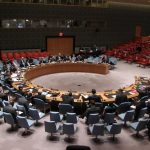 Syria ceasefire a triumph of diplomacy, but militarism still rules in Ottawa and other Western capitalsMultipolarity, Roger Annis