The online, corporate publication Vox.com has published a lengthy analysis of the growing war danger in the conflict between the countries of the NATO military alliance and Russia, including the threat of nuclear weapons. The article is titled ‘How World War Three became possible’ and was published on June 29.

Vox feature warns the world of the Russian war threat

A great many analysts and writers are warning of precisely the danger of generalized and even nuclear war as NATO expands eastward in Europe. The imperialist alliance is expanding its bases and its list of potential country members closer and closer to the Russian border. Key writings of these analysts are compiled on a special page on the New Cold War.org website: Nuclear war danger.

Their warnings are confirmed by the news reports that the U.S. has embarked on a trillion-dollar “modernization” of its nuclear weapons arsenal and delivery systems. It is developing a new generation of hyper-sonic missiles where early detection of a firing is more difficult  and is considering redeploying  medium-range nuclear missiles to Europe. The U.S. nuclear weapons arsenal in Europe has declined in the past several decades due to European citizen protests and some international agreements, such as the 1987 Intermediate-Range Nuclear Forces Treaty between the United States and the Soviet Union.

But the conflict with Russia over Ukraine is serving as a pretext for the U.S. and NATO to reverse the course of a lessening of nuclear tensions and raise the spectre of new deployments.

Never mind all that and more, reports Vox. It begins its article with a familiar refrain, “It was in August 2014 that the real danger began and we heard the first warnings of war. That month, unmarked Russian troops covertly invaded eastern Ukraine, where the separatist conflict had grown out of its control…”

And further, “Western nations worry, with reason, that Russia could use the threat of war, or provoke an actual conflict, to fracture NATO and its commitment to defend Eastern Europe.”

Just in case the message isn’t clear, “Should the warnings prove right and a major war breaks out in Europe between Russia and the West, then the story of that war, if anyone is still around to tell it, will begin with Russian President Vladimir Putin trying to solve a problem. That problem is this: Putin’s Russia is weak.”

“Knowing his military is outmatched against the Americans, he is blurring the distinction between war and peace, deploying tactics that exist in, and thus widen, the gray between: militia violence, propaganda, cyberattacks, under a new rubric the Russian military sometimes calls ‘hybrid war’.” (For the record, the concept ‘hybrid war’ is a Western invention and obfuscation.)

Vox employs an interesting ruse to convince its readers. A crude, anti Russia argument would look unconvincing. Crude argumentation is losing credibility. Even Western governments are now openly admitting that their propaganda war over Ukraine is losing ground amongst their skeptical public. Alternative news sources, notably RT.com, are gaining favour. No, the war danger, we read, is due to the excessive zeal of Russian political or military leaders in which they might inadvertently stumble their way into war. Add that to a too-clever-by-half scheming that Russia can get around the nuclear weapons dominance of the U.S. by playing with less-than-all-out war plans which nonetheless involve deadly nuclear weapons and, voila, the new danger of world war.

Then we enter the territory of SCARY HISTORICAL ANALOGY. “Today’s Russia, once more the strongest nation in Europe and yet weaker than its collective enemies, calls to mind the turn-of-the-century German Empire, which Henry Kissinger described as ‘too big for Europe, but too small for the world’.

“Now, as then, a rising power, propelled by nationalism, is seeking to revise the European order. Now, as then, it believes that through superior cunning, and perhaps even by proving its might, it can force a larger role for itself. Now, as then, the drift toward war is gradual and easy to miss — which is exactly what makes it so dangerous.”

Following that foray, Vox describes four scenarios of “How it could happen”, that is, a new world war could break out. Each scenario is founded on an initial act of Russian aggression.

Then we arrive at the ‘accident’ thesis: “If an accident or miscalculation were to lead to a border skirmish, all it would take is for the Kremlin to misperceive the fighting as the beginning of an assault toward Moscow and its own doctrine would call for using nuclear weapons. Indeed, it would be the only way to avoid total defeat.” There you have it: ‘It’s not that we here at Vox are clumsy, anti-Russia propagandists. No, no, we’re genuinely concerned that “something” untoward could happen.’

Part nine of the 12-part article returns us to the original theme: “The nuclear dangers: How Putin is pushing us back to the brink”. From there to the end it is full-on ‘Putin is playing with nuclear fire and, gosh, we folks here at Vox think you should know about it.’

As we wrote at the outset of this commentary, go to the many serious writers at the Nuclear war danger web page to read about today’s war danger in Europe. If you want slick propaganda and have a lurid interest in hypothetical war games scenarios, Vox is a recommended read. 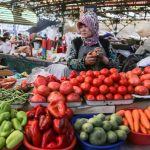 Debate over why the rise of food production in RussiaDigest, Russia
The growth of fascism in Ukraine before and after EuromaidanBackground, Ukraine, Victor Shapinov, Writers A-E