BRUSSELS – The 12th International Conference on “The EU, Turkey and the Kurds” hosted by the European Union Turkey Civic Commission (EUTCC) kicked off at the European Parliament earlier today. 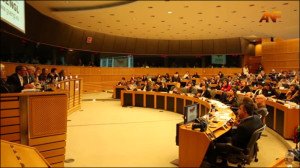 Nobel laureate and former President of East Timor, José Ramos Horta, said he was watching the Kurdish people’s struggle with great admiration, saying, “The women fighting in Syria and Iraq are amazing combatants who remind me of woman revolutionaries that defended Stalingrad and Vietnam against occupation. Kurds are an example of the longest denial of a folk as a whole.”

Horta expressed his wishes for the attainment of peace between Kurds and the Turkish state as did happen in his country after an occupation by Indonesia of 24 years.

Nobel Peace Prize Laureate Shirin Ebadi from Iran called attention to the importance of ethnical and cultural diversity for cultural development, saying that it is among the basic duties of a democratic country to preserve this diversity and ensure that these segments do not suffer a violation of their rights.

Ebadi underlined that the Turkish state must respect the cultural rights of the Kurdish people who are going through a very severe situation at the moment. She noted that Kurds in East Kurdistan are also suffering discrimination by the Iranian government.

Speaking at the second session titled ‘From Model To Problem’, Peter Galbraith said Kurds most deserved participation in a ‘Geneva-3’ conference on the future of Syria because it was they who have fought terrorism the most. Galbraith underlined that Turkey should return to the table and reinitiate peace talks with the Kurdish movement, adding; “Whether you like it or not, the PKK is an effective movement. If you want peace, you must make peace with the PKK.”

Journalist Cengiz Çandar called attention to the disaster Turkey faces today, saying, “Turkey has evolved into a fascist regime after the elections. I am worried for my country as the Kurdish people are being subject to a disaster. What we face is an abdication of reason.”

Çandar emphasised that the AKP ruling party is also based on the support it has received from the European Union while perpetrating atrocities against the Kurdish people. “If the EU continues to act in line with its interests and remains silent on Turkey’s immoral practices, the situation will get much graver”, he added.

Susan Breau remarked that the Kurdish people had to take up arms and fight to protect their existence and yet have been charged with terrorism for fighting crimes against humanity. Stressing that the definition of terrorism must be changed, Breau said Kurdish combatants sacrificed their lives in the fight against ISIS, but were still labelled criminal and terrorist. “Turkey is making the anti-ISIS fight difficult. Kurds are the only force fighting these inhuman forces.”

Speaking next, HDP co-chair Selahattin Demirtaş pointed out that Turkey is currently going through the darkest political atmosphere of its recent history. “While the balances and statues in the region have all been turned upside down, this became a crisis of Turkey’s due to its unpreparedness with regards to the ideological foundation and foreign policy of the government. Kurds have reached the stage of catching up with change and comeingup with a solution to their own Kurdish problem.”

Pointing out that today, Kurds have once again taken to the stage of history, Demirtaş said this recently formed Kurdish perspective doesn’t threaten or ignore the Turkish people, other cultures, identities and faith groups in Turkey. He continued, “Kurds do not threaten Turks as an enemy. Nor are they a threat to Turkishness, secularism, Islam or other religions and faith groups. Yet, why do Turks consider Kurds as a threat? Because they have a status quo mindset. The world is changing and Turkey continues to pay a heavy price as it persistently remains out of this. All peoples are paying heavier prices.”

Demirtaş described Turkey’s objection to participation of the People’s Protection Units forces in northern Syria in a forthcoming Geneva-3 meeting as an abdication of reason. 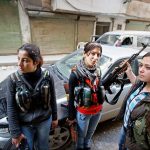 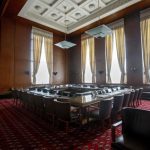 Syria peace talks: If the crisis is to be solved, it will be by an agreement between Russia and the United StatesMultipolarity, Russia