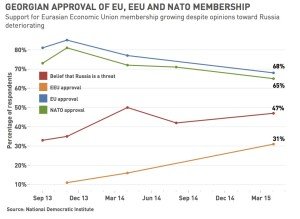 Poll of Georgians in spring of 2015 by National Democratic Institute

A recent poll by foreign affairs think-tank the National Democratic Institute has shown that Georgian approval of Eurasian Economic Union (EEU) membership has doubled in the last year.

In the poll, 31% of respondents said that they approve of Georgia joining the Russian-led trade bloc, which could eventually grow into a common market covering most of the former Soviet space – nearly twice the 16% who approved a year earlier.

Despite the enthusiasm over the EEU, negative opinions of Russia are still prevalent in Georgia, with nearly half of all respondents stating that they believe Russia to be a threat.

Nato and EU membership aspirations remain strong among Georgians, with roughly two-thirds of all respondents approving of membership in both groups, at 65% and 68%, respectively. 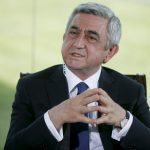