The latest monthly report on Ukraine by the United Nations Human Rights Office (OHCHR) has earned some headlines because it reports that significant numbers of people are still being killed by the war in the east of the country, notwithstanding a ceasefire agreement on September 5 to which the Ukrainian government committed itself.

The 49-page UN report covers the period Sept. 17 to October 31 and is based on the work of the United Nations Human Rights Monitoring Mission in Ukraine (HRMMU). The report says nearly 1,000 people, an average of 13 per day, were killed between Sept. 6 and Oct. 31. “Since the beginning of the hostilities in mid-April until 31 October, at least 4,042 people were killed and 9,350 were wounded in the conflict affected area of eastern Ukraine”.

The report also says that the HRMMU and World Health Organisation consider these numbers to be conservative estimates. “Both believe that the casualties have been under reported, and that their actual numbers are considerably higher.”

Because of the UN authorship of these monthly reports (this latest report is the seventh), readers will assume they are getting a balanced and unbiased view of the situation in Ukraine. But this is far from the case. A careful reader can quickly discern the very deep bias contained within.

The OHCHR does not formally recognize the governing authorities in the peoples republics of Donetsk and Luhansk. It considers the two territories to be under the control of lawless “armed groups”. There is not a word of explanation as to why such “armed groups” arose in the first place. Indeed, the agency considers the war by the governing regime in Kyiv that began in April as the legitimate act of a government under attack. In a clever but evil public relations ploy, Kyiv calls its war launched last April an “Anti-Terrorist Operation”.

The latest report touches ever so briefly on the reported use of cluster munitions by the Kyiv government. This war crime was reported on Oct. 20 by The New York Times and Human Rights Watch. As with other reported war crimes (shellings of towns and cities, discoveries of mass graves in the territories occupied by Kyiv), the OHCHR dances delicately around the issue, avoiding ascribing responsibility. Thus, the report says:

Due to their wide radius and indiscriminate impact, their use [cluster weapons] in areas with a civilian presence would constitute a violation of international humanitarian law and may amount to a war crime. The Government has denied the use of cluster munitions. Reports on the use of cluster munitions, as well as those of indiscriminate shelling, need to be investigated promptly and thoroughly.

Speaking of “prompt investigations”, the UN report makes no direct reference and provides no information on the investigation of the crash of Malaysia Airlines Flight 17 last July 17 that killed 298 passengers and crew. Only recently have a few (only very few) mainstream media outlets reported that the four countries that make up the “international investigation team”—Holland, Australia, Belgium and Ukraine (not Malaysia!)–signed an agreement last August 8 whereby any of them can veto the release of any information gathered. Meanwhile, much of the debris from the crash is still scattered on the fields of eastern Ukraine because the Kyiv government has never agreed to cease its military operations long enough to allow investigators to conduct their work thoroughly. The stalling and the rigged nature of the investigation are prompting rising concern and criticism in Malaysia.

The UN report says, “The overall number of IDPs [internally displaced people] increased from 275,489 as of 18 September to 436,444 on 29 October, according to the State Emergency Service of Ukraine. Of these 417,410 people have come from the conflict affected areas… as well as 19,034 IDPs from Crimea.” Despite the enormity of these numbers and the numerous reports of the dire conditions that many face, including as winter sets in, the report provides less than two pages of analysis. Its language and description contrast sharply with those of Michael Bociurkiw, spokesperson for the Organisation for Security and Cooperation in Europe. He told a public forum in Ottawa on Oct. 30, “We are getting very, very close to a humanitarian catastrophe in Ukraine”.

Rather tellingly, the report devotes one sentence to the externally displaced persons affected by Kyiv’s war, that is, the massive number of people who have been forced to seek refuge in Russia. The report cites the UN High Commissioner for Refugees in listing 454,339 people who have taken refuge there. The numbers reported by Russian government agencies is more than twice that. The report says there are an estimated 3.1 million people living in the territories of the peoples republics of Donetsk and Luhansk.

Additionally in the report, we read:

There have also been allegations by victims and their relatives, as well as civil society representatives of secret and illegal places of detention being operated by the armed groups, as well as some being maintained by some volunteer battalions outside of judicial oversight. The HRMMU continued to receive credible reports of persons deprived of their liberty being subjected to torture and ill-treatment while being illegally held or detained by either the armed groups or by Ukrainian law enforcement agencies and some volunteer battalions.

The report also says that an investigation is ongoing into the mass murders committed in Odessa on May 2 when right-wing mobs attacked opponents of the pro-European Union government that came into power in Kyiv in February.

Other examples of the UN’s obfuscation are contained in the UN News Center report announcing the OHCHR report. It reads:

According to the report, violations of international human rights and humanitarian law “persist” as the situation in the conflict-affected area in Ukraine’s eastern regions of Donetsk and Luhansk becomes “increasingly entrenched, with the total breakdown of law and order and the emergence of parallel governance systems.” The result, continued the report, has been a simmering conflict which has left 957 people dead in defiance of a 5 September ceasefire.

The report summarizes the origin of the conflict in the following words:

In late February 2014, the situation in Ukraine transcended what was initially seen as an internal Ukrainian political crisis into violent clashes in parts of the country, later reaching full-scale conflict in the east. The situation has since continuously deteriorated, with serious consequences for the country’s unity, territorial integrity and stability, culminating in the recent 2 November separatist vote described by Secretary-General Ban Ki-moon as a “breach of the constitution and national law.”

Thus does a war by a government against a portion of its national territory become transformed into a “conflict” between “armed groups”. We read further:

The OHCHR document – the seventh produced by the UN Human Rights Monitoring Mission in Ukraine – covers the period between 17 September and 21 October 2014 during which serious human rights abuses by the armed groups were reported, including torture, arbitrary and incommunicado detention, summary executions, forced labour and sexual violence as well as the destruction and illegal seizure of property.

Which “armed groups”, and where? The heavy inference throughout the report is that the “armed groups” of the pro-autonomy forces of eastern Ukraine are the primary culprits. Indeed, the report happily explains, that, “a number of positive measures have been adopted by the Government in Kiev amid the pressures of the crisis. Laws on IDPs, on corruption, and on reform of the Office of the Prosecutor have all passed the country’s legislature while Ukrainian President Petro Poroshenko recently signed a decree tasking the Government to develop a national human rights strategy for Ukraine by 1 January 2015.”

Earlier this month, in the wake of Nov. 2 elections in the peoples republics of Donetsk and Luhansk, Poroshenko announced he would present to the new parliament a law to cancel the promise he made at the time of the signing of the Sept. 5 ceasefire to grant a vacuous status of ‘autonomy’ to the two rebellious regions. Voter turnout on Nov. 2 was reported to be very high, in contrast to the very low turnout for the national election on Oct. 26 in the areas of the two regions under the control of Kyiv.

Throughout the course of the war, the Poroshenko government and its police and judicial forces have enacted one draconian measure after another against civil and political freedoms, including authorizing police to shoot on sight anyone advocating “separatism” for eastern Ukraine. These receive scant mention in the Un report. The recognition and the recommended remedies of those rights abuses that are listed in the report amount to a slap on the wrist.

The report is published in the context of a mainstream media frenzy emanating from the corridors of power of the NATO countries in which Russia is blamed for all the ills in Ukraine. The liberal Observer (Guardian on Sunday) in the UK summed up the increasingly warlike and hawkish tone towards Russia in a Nov 16 editorial sub-titled, ‘World leaders must stand up to Putin to bring him to heel’. The newspaper proposes to bar Russia from international institutions, increase economic sanctions and step up military pressure and threats. “Increased financial pressure coupled with intensified diplomatic action and bolstered NATO support for European countries bordering Russia could convince Moscow that the costs of its antisocial behaviour are too high to bear.”

The ‘anti-social behaviour’ that so annoys the Observer/Guardian editors and the leaders of NATO is Russia’s refusal to police the pro-autonomy movement in eastern Ukraine to their liking. This is all the more hypocritical on their part considering that, as a recent article by Russian writer Boris Kagarlitsky makes clear, the Russian government can scarcely be accused of fomenting anti-austerity or socially progressive struggle in Ukraine.

Roger Annis is an editor of the new website The New Cold War: Ukraine and beyond.

MH17 investigation– A scandal in the makingDigest, Malaysia Airlines crash 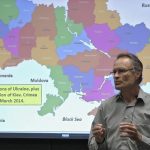